No one knows if birds really sing for joy, but we do know they have other good reasons for singing.

Play our Tuesday Tweet videos from Instagram and see if you can guess the bird before the video reveals.

Bird song is a form of advertisement, sending two messages to other birds of the same species. One message is a form of courtship. The singing male tells females he is available. The other message warns competing males to stay out of his nesting territory. Male birds fly about and sing from different perches in their territory to announce their boundaries. This keeps the area from being invaded by competitors and protects the food for their families.

Singing peaks during spring when birds pair off and claim territories. There is great variety among bird songs, from the red-winged blackbird’s trill to the robin’s melodious warbling. Even the noisy hammering of a woodpecker functions like a song. A common forest bird, the red-eyed vireo, may be the champion songster. A dedicated bird-watcher (who apparently had time on his hands) observed a red-eyed vireo singing 22,297 songs within a day.

So, beyond its beauty, bird song is serious business. Without song, most of our common birds could not reproduce.

You’ve likely heard a bird or two singing this spring. But do you know how our avian friends flex their vocal talents?

For more about the bird songs, check out The Cornell Lab’s Bird Academy. 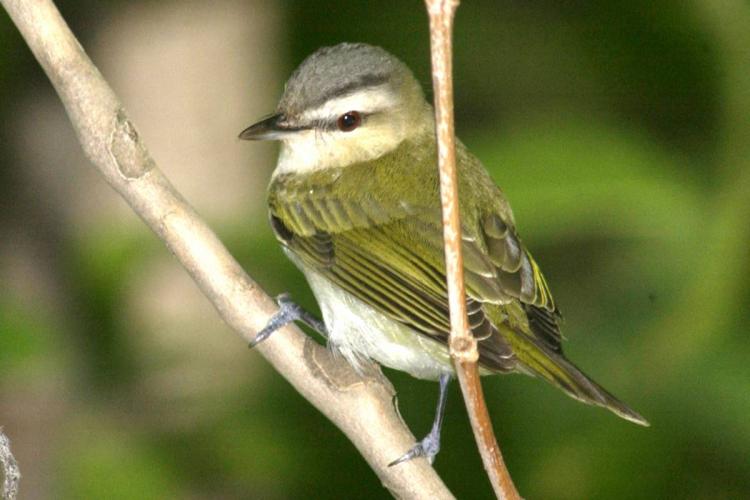 Caption
The red-eyed vireo has an eye-line as a distinguishing feature.
Credit
Missouri Department of Conservation
Right to Use
1/1
Image