Look around the Mississippi flyway this fall, and you may see the greater or lesser scaup ("SKOPP"). Scaups are diving ducks that can fully submerge and swim underwater for food. You will have a greater chance of seeing the lesser scaup, which is a common migrant in Missouri. The greater scaup prefers more coastal areas and is rarely seen in the state.

The lesser scaup prefers freshwater and can be seen in lakes, ponds, rivers and reservoirs. They are smaller than the greater scaup, with an angular or peaked head with a purple sheen.

To take flight, they flap their wings and run along the surface until they are airborne. They forage underwater for aquatic vegetation and insects, snails and crayfish. Lesser scaups are one of the most populous diving ducks in the country.

Here's a quick guide to identifying some common ducks.

Mallards, or "greenheads," are Missouri's most common duck. Hens have a loud quack; drakes give a lower-pitched kwek-kwek.

These slender ducks fly fast and often zigzag from great heights before leveling off to land. They may be seen in flocks with mallards. Drakes whistle; hens give a coarse quack.

The drake wood duck is Missouri's most colorful duck. While flying, their wings make a rustling, swishing sound. Drakes call hoo-w-ett, often in flight; hens give a wailing cr-r-ekk when frightened.

This diver can be confused with scaup and redheads. In flight, the dark wings of ringnecks are different from the white-edged wings of scaup. The bold white ring at the tip of the bill is usually conspicuous.

Except for the wings, greater and lesser scaup appear almost identical in the field. The white band near the trailing edges of the wings runs almost to the wing tip in greater scaup, but only halfway in the lesser. Do not confuse scaup with the similar-looking ring-necked duck.

Find out more about ducks with the MDC Field Guide. 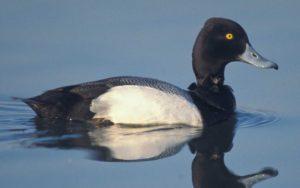