For many of us, the flashy, bold blue jay was the first bird we learned to identify. Jays are conspicuous because of their size and striking color. White patches and black bars highlight the bird's blue wings and tail, and it has white underparts and a black necklace on its front. A jay also sports a distinct crest.

Jays belong to a family of birds that includes magpies and crows. All of these birds are aggressive, a trait that might strike people as unappealing when they watch blue jays bullying smaller birds around feeders.

Blue jays act as danger alarms of the forest, and greet intruders with a piercing "jay, jay, jay" or "thief, thief, thief." People, owls, hawks, snakes and other potential predators prompt this reception. Jays' voices are harsh, but their calls are a varied repertoire that includes what sounds like a very good impression of a squeaky pump handle.

The bird's powerful, all-purpose bill efficiently handles a wide range of food, but they prefer acorns. Blue jays will bury several to eat later. Some acorns are never recovered, giving them a good start on becoming oak trees.

The Anatomy of a Blue Jay 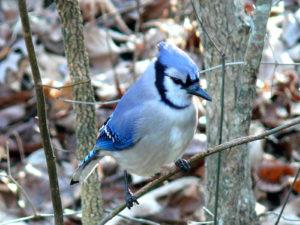 Right to Use
1/4
Audio file
Caption
Hear the story of the Blue Jay
2/4
Video URL
Caption
Listen to the blue jay's call in the video below, courtesy of MyBackyardBirding.
3/4
Image 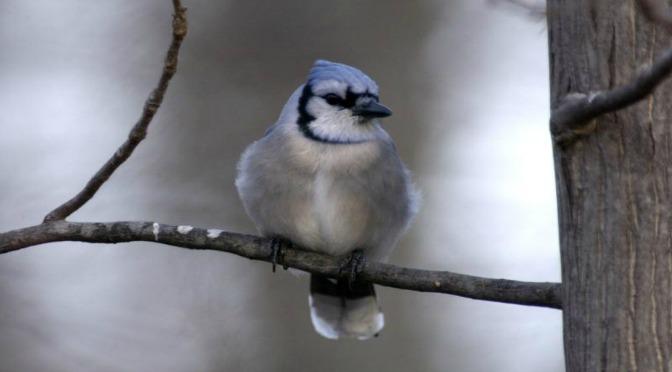