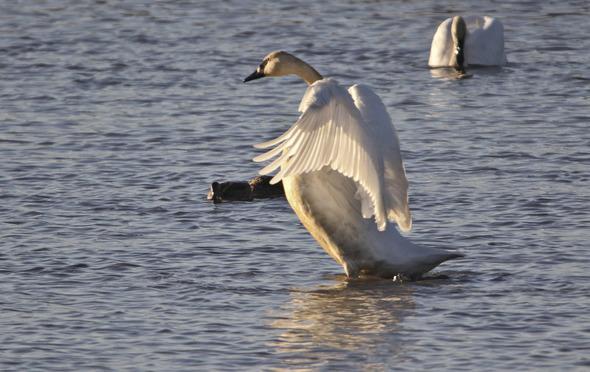 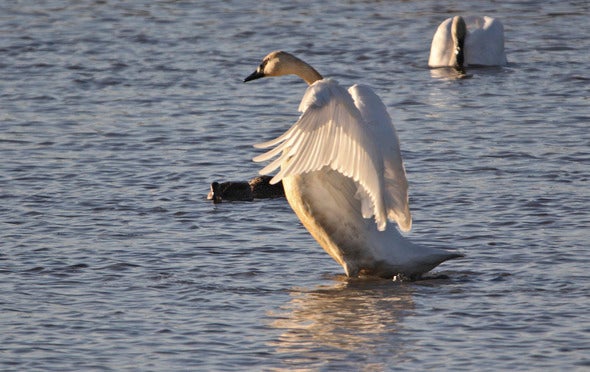 KANSAS CITY, MO. – Trumpeter swans are back for their winter visit to Missouri. The graceful white swans with broad wingspans, long necks, and trumpet-like calls are an impressive part of winter’s watchable wildlife.

Thanks to conservation and restoration efforts, breeding populations of trumpeter swans in states such as Iowa, Wisconsin, and Minnesota are steadily increasing. Trumpeters that nest in those states migrate to Missouri in winter. People are seeing them more frequently on ponds, lakes, and wetland pools, say Missouri Department of Conservation (MDC) biologists.

“We have seen a trend toward increasing numbers of trumpeter swans wintering in Missouri, particularly on the Missouri River,” said Doreen Mengel, MDC resource scientist. “The numbers seen during the mid-winter survey, which is conducted in early January each year, have increased a fair amount the past couple years. I believe the numbers at Riverlands along the Mississippi River have also increased in recent years.”

Weather patterns somewhat dictate swan movements. However, given favorable weather and habitat, trumpeters will often visit the same lakes or ponds each winter, often as family groups. Swan watching is an annual outdoor activity each winter at wetlands and lakes in northwest and west central Missouri.

“The Four Rivers Conservation Area and Katy Allen Lake in Nevada have been traditional areas for swans to hang out,” said Chris Daniel, MDC wildlife management biologist and manager at Four Rivers. “We typically see a few swans during later waterfowl season on Four Rivers, but January is usually when we have peak numbers. My perception is that I’ve seen more swans consistently the last seven seasons than my first seven. I consider 25 to 40 swans here at one times a pretty good year.”

Swans may appear on winter waterways as a single bird, in pairs, or in family groups with parents and young cygnets born in early summer. But sometimes on major wetlands, large numbers of swans mingle with ducks and geese. In mid-January, 2015, staff counted 400 or more trumpeter swans at MDC’s Bob Brown Conservation Area in northwest Missouri.

Trumpeter swans were native to Missouri as both nesting and wintering birds. But by the early 1900s they were almost extinct in the lower 48 states. Conservation efforts and re-introductions in northern states have slowly brought them back in the Midwest.

A few pairs of trumpeter swans began appearing during winter at the Loess Bluffs National Wildlife Refuge about 15 years ago, said Lindsey Landowski, refuge manager. Then over the years, the numbers began increasing. On Dec. 12, refuge staff counted 950 trumpeters at various wetland pools. The refuge record is 1,088 counted in February, 2017. Cold spells and frozen marshes send trumpeters farther south, warmups early in the year bring them back north.

“It appears our numbers are the highest during spring migration in February,” Landowski said. “There are still high numbers for fall migration. But the highest are in February, based on past surveys. Keep in mind that our past two winters have been pretty mild, so the swans were migrating back north in February already.”

Bald eagles and large flocks of snow geese have always entertained winter wildlife watchers. But trumpeter swans are now a major draw, too.

“They are popular for visitors to see because they are often seen close to the auto tour route,” Landowski said of the refuge’s auto loop through the marshes. “They are very graceful looking in the water, beautiful. “And they are easy to see with their big white bodies in the wetlands or flying low in the air.”

For more information about trumpeter swans in Missouri, visit https://short.mdc.mo.gov/ZSZ.