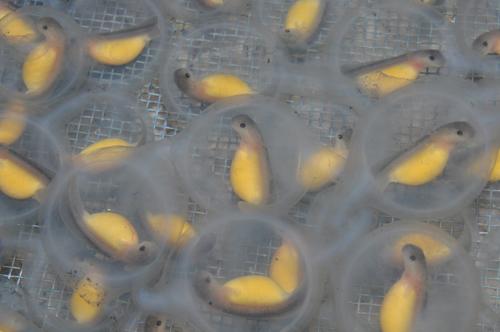 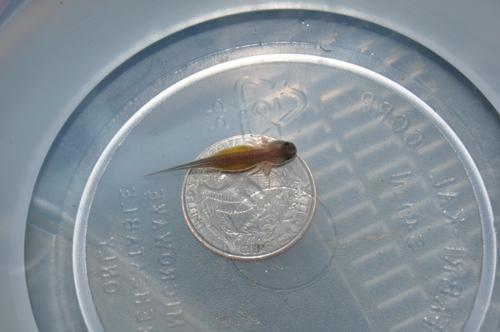 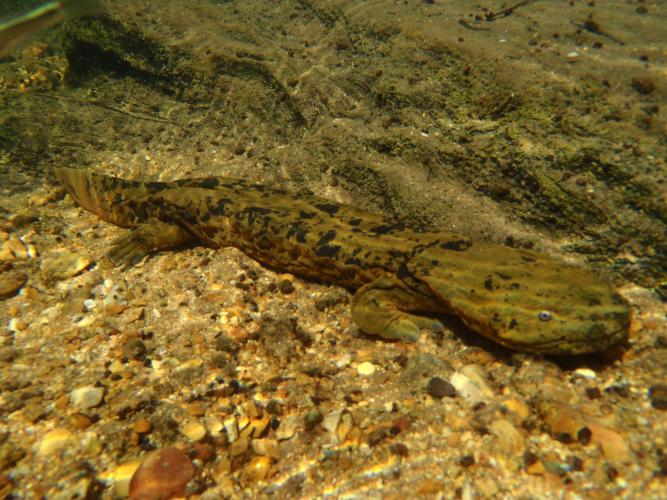 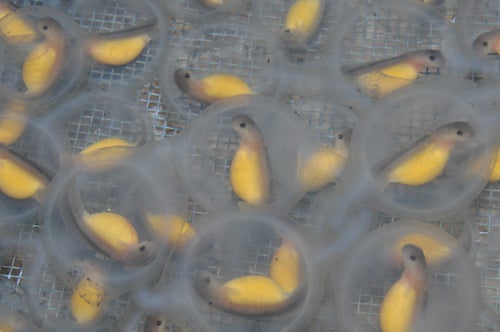 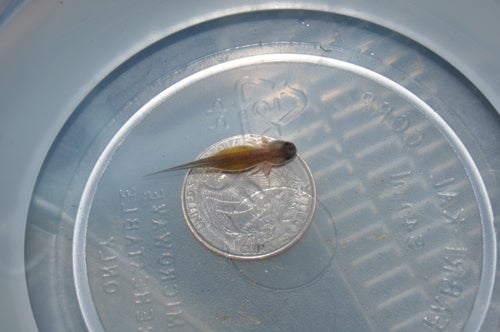 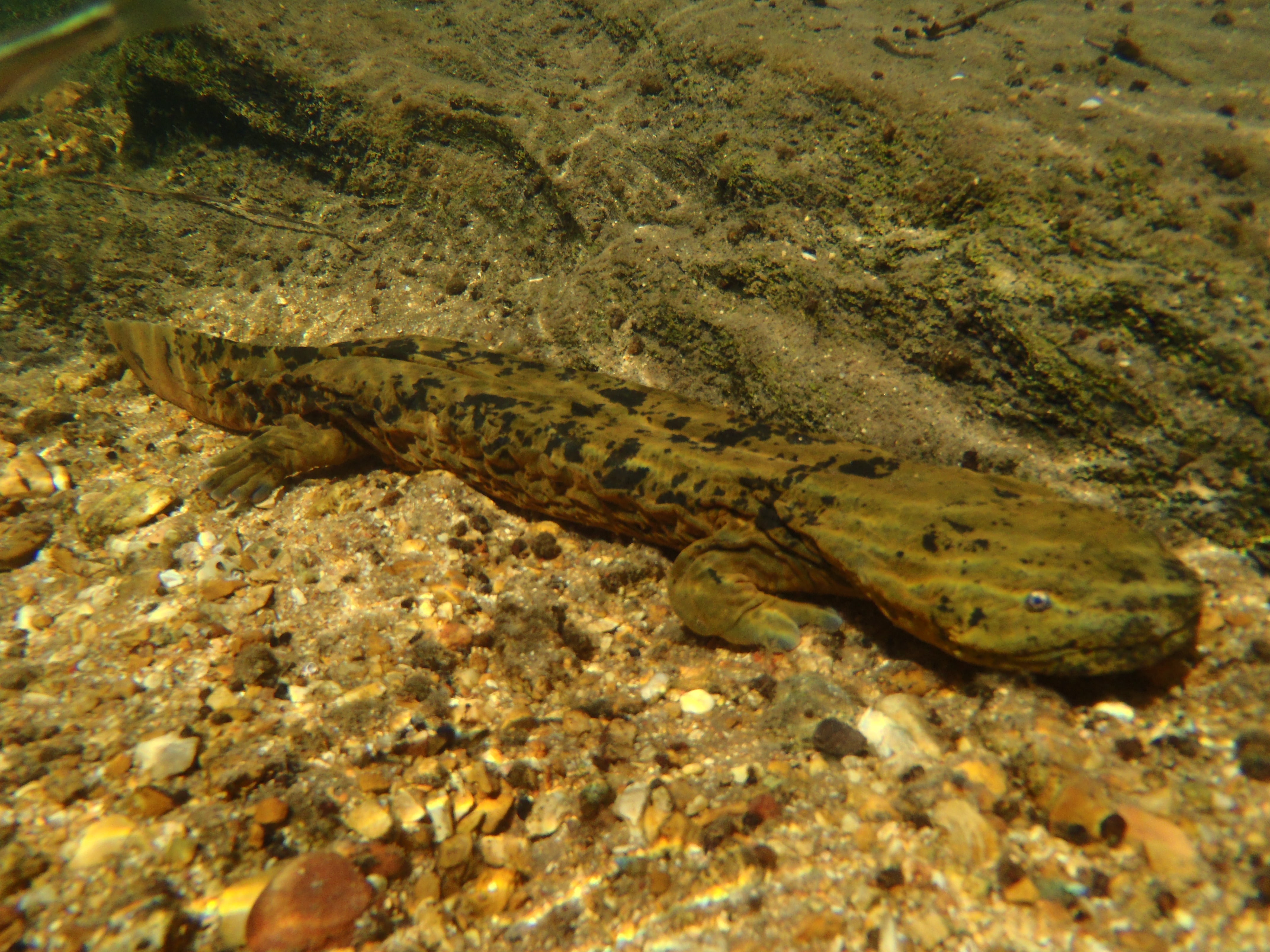 ST. LOUIS -- The Saint Louis Zoo’s Ron Goellner Center for Hellbender Conservation and the Missouri Department of Conservation today announced that Ozark hellbenders have been bred in captivity—a first for either of the two subspecies of hellbender. This decade-long collaboration has yielded 63 baby hellbenders.

The first hellbender hatched on Nov. 15, and currently there are approximately 120 additional eggs that should hatch within the next week. The eggs are maintained in climate- and water quality-controlled trays behind the scenes in the Zoo’s Herpetarium. For 45 to 60 days after emerging, the tiny larvae will retain their yolk sack for nutrients and move very little as they continue their development. As the larvae continue to grow, they will develop legs and eventually lose their external gills by the time they reach 1.5 to 2 years of age. At sexual maturity, at 5 to 8 years of age, adult lengths can approach two feet. Both parents are wild bred: the male has been at the Zoo for the past two years and the female arrived this past September.

Rivers in south-central Missouri and adjacent Arkansas once supported up to 8,000 Ozark hellbenders. Today, fewer than 600 exist in the world—so few that the amphibian was added in October 2011 to the federal endangered species list.

Due to these drastic declines, captive propagation became a priority in the long-term recovery of the species. Once the captive-bred larvae are 3 to 8 years old, they can then be released into their natural habitat—the Ozark aquatic ecosystem.

Also known by the colloquial names of “snot otter” and “old lasagna sides,” the adult hellbender is one of the largest species of salamanders in North America, with its closest relatives being the giant salamanders of China and Japan, which can reach five feet in length.

With skin that is brown with black splotches, the Ozark hellbender has a slippery, flattened body that moves easily through water and can squeeze under rocks on the bottom of streams.

Requiring cool, clean running water, the Ozark hellbender is also an important barometer of the overall health of that ecosystem—an aquatic “canary in a coal mine.”

“Capillaries near the surface of the hellbender’s skin absorb oxygen directly from the water – as well as hormones, heavy metals and pesticides,” said Jeff Ettling, Saint Louis Zoo curator of herpetology and aquatics. “If there is something in the water that is causing the hellbender population to decline, it can also be affecting the citizens who call the area home.”

“We have a 15- to 20-year window to reverse this decline,” added Missouri Department of Conservation Herpetologist Jeff Briggler, who cites a number of reasons for that decline from loss of habitat to pollution to disease to illegal capture and overseas sale of the hellbender for pets. “We don’t want the animal disappearing on our watch.”

In 2001, the Ozark Hellbender Working Group of scientists from government agencies, public universities and zoos in Missouri and Arkansas launched a number of projects to staunch that decline. These included egg searches, disease sampling and behavioral studies.

In 2004, funding from private donors, the Missouri Department of Conservation, the United States Fish & Wildlife Services and the Zoo covered the cost of building sophisticated facilities including climate-controlled streams to breed the hellbender.

The hellbender propagation facilities include two outdoor streams that are 40 feet long and six feet deep. The area is landscaped with natural gravel, large rocks for hiding and artificial nest boxes, where the fertilized eggs were discovered. A nearby building houses state-of-the-art life support equipment used to filter the water and maintain the streams at the proper temperature.

In addition, two large climate-controlled rooms in the basement of the Zoo’s Charles H. Hoessle Herpetarium are the headquarters for the program. The facilities recreate hellbender habitat with closely monitored temperatures, pumps to move purified water, sprinklers synced to mimic the exact precipitation and lights that flick on or dim to account for brightness and shade. The largest room includes a 32-foot simulated stream, complete with native gravel and large rocks for hiding. It houses a breeding group of adult Ozark hellbenders from the North Fork of the White River in Missouri; offspring from these hellbenders will eventually be released back into the wild.

The Ron Goellner Center for Hellbender Conservation is part of the Wildcare Institute. Ranked as America’s #1 Zoo by Zagat Survey and Parenting Magazine, the Saint Louis Zoo is widely recognized for its innovative approaches to animal management, wildlife conservation, research and education. One of the few free zoos in the nation, it attracts about 3,000,000 visitors a year.

Saint Louis Zoo launched its WildCare Institute in 2004 to further numerous wildlife conservation projects around the world. The Zoo partners with other zoos, universities, field biologists and government agencies to develop a holistic approach: wildlife management and recovery, conservation science and support of the human populations that coexist with wildlife.

The Missouri Department of Conservation protects and manages the fish, forest and wildlife resources of the state of Missouri. The state agency facilities citizens’ participation in resource management activities and provides opportunities for use, enjoyment and education about nature.

Body
News Release from U. S. Fish and Wildlife Service