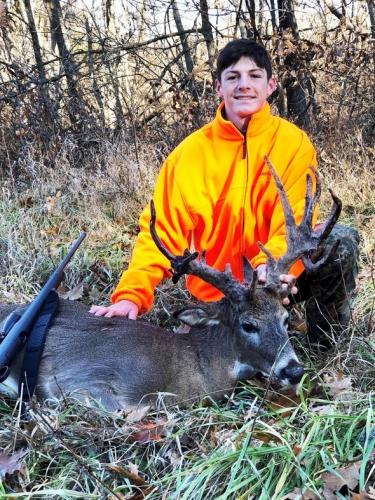 Caption
Brenden Marsh, 18, of Oak Grove, harvested this unusual antlered doe on Nov. 24 in Lafayette County. Normally, only male deer or bucks have antlers. Does with antlers are rare and occur in very low numbers due to genetic, hormonal, or physiological anomalies.
Right to Use
1/1
Image 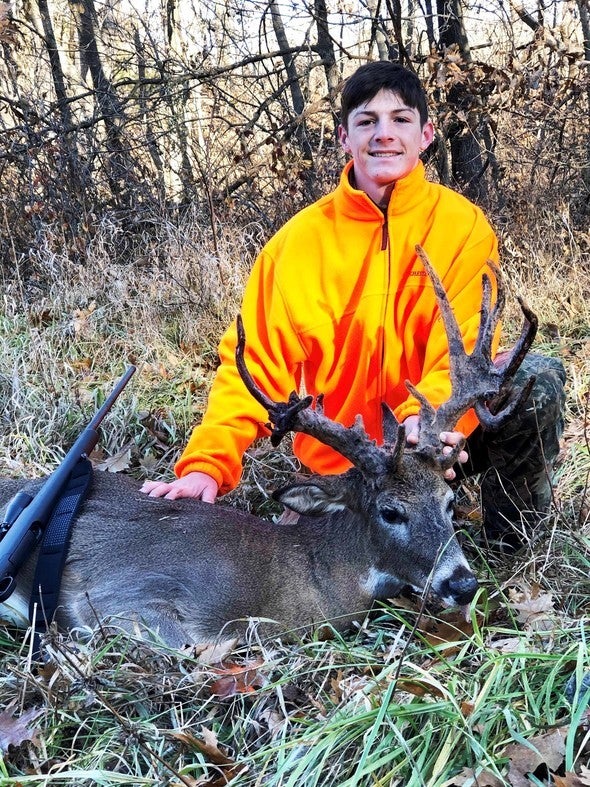 Is user submitted
Caption
Brenden Marsh, 18, of Oak Grove, harvested this unusual antlered doe on Nov. 24 in Lafayette County. Normally, only male deer or bucks have antlers. Does with antlers are rare and occur in very low numbers due to genetic, hormonal, or physiological anomalies.
Right to Use
News from the region
Kansas City
By
Bill Graham
Published Date
11/27/2019
Body

Kansas City, Mo. – Brenden Marsh recently collected a lifetime-worthy tale to tell in future deer camps as well as venison and some unusual antlers. Marsh, 18, of Oak Grove, shot a doe with antlers in Lafayette County during Missouri’s November firearms deer season. Normally, only male deer, the bucks, have antlers. But genetic, hormone, and physiological anomalies occur in nature and occasionally the female does will have antlers.

“There are not good percentages available for how common or uncommon does with antlers occur,” said Kevyn Wiskirchen, the Missouri Department of Conservation’s (MDC) private lands deer biologist. But he added, they are “very rare.”

Antlers can occur in females with unusually high testosterone levels. In some cases, what appears to be a doe is not a true female but rather a hermaphrodite with female and male genitalia, or a male lacking external genitalia. The antlers on true females are usually still in velvet far past the time when bucks have hardened their antlers for fighting over does during the rut or mating season.

Marsh’s doe had a female udder, and the antlers were still in velvet. That’s rare. But the non-typical antlers were also larger than what is usually found on a similar doe.

“When I saw it, it was walking with four does, and a buck trailed 20 yards behind them,” Marsh said.

When he began field dressing the deer, he noticed there was no male genitalia. As family members arrived to help, they checked and found no sign of male glands. It weighed 165 pounds after field dressing. They counted 19 points on the antlers. Marsh has harvested a few other deer before, but not like this one.

“This is definitely the biggest by far for me,” he said. “It’s my first deer to take with a rifle. So, it’s quite an accomplishment.”

Antlered does or anomalies such as white or albino deer occur in low numbers. But they possess poor genetic traits for survival in the wild, said Joe DeBold, MDC urban wildlife biologist. Harvesting such deer makes an unusual trophy for a hunter, but it also removes inferior genetic traits from a deer herd.

For more information on white-tailed deer in Missouri, visit https://short.mdc.mo.gov/ZMK.