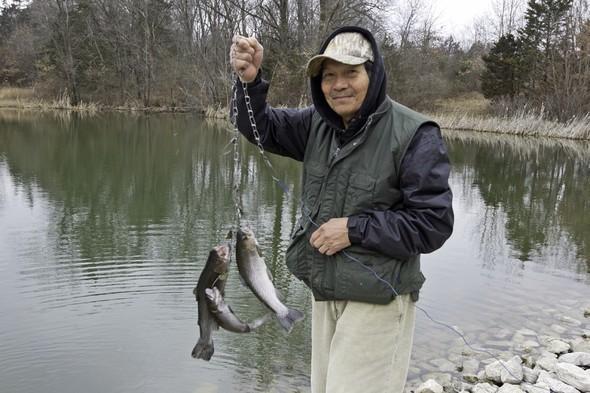 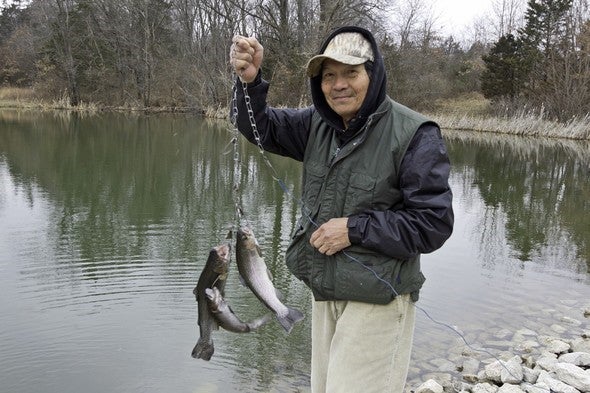 St. LOUIS, Mo.—You don’t often see a rainbow in the middle of winter . . . unless of course it’s at the end of your fishing line.

During winter months, the metro St. Louis area is a great place to fish for rainbow trout, thanks to the Missouri Department of Conservation’s (MDC) winter trout program.

Winter trout season for MDC’s St. Louis Urban Fishing Program starts in November.  That’s good news for trout chasers who now to need drive only minutes to pursue their passions rather than hours to a Missouri trout park.

During cold-weather months, MDC stocks nearly 40,000 rainbow trout each year in 12 St. Louis City and County lakes, Union City Lake in Franklin County, as well as in five lakes in the August A. Busch Conservation Area on Route D in St. Charles.

MDC will continue to add several brood stock lunker trout—some as large as 10 lbs.—into the mix at its urban winter trout lakes, including the ones in August A. Busch Conservation Area.

Between Nov. 1 and Jan. 31, some lakes are catch-and-release only, and some are catch-and-keep.  After Feb. 1, trout may be harvested from all lakes.  Anglers can find  information on specific winter trout lakes statewide at https://short.mdc.mo.gov/Zd5, or check regulations posted at the lakes.  All trout anglers between age 16 and 64 must have a valid Missouri fishing permit to participate.  Anglers wishing to catch and keep trout must also possess a trout permit regardless of age.

“The fish stocking hotline is a very popular resource for St. Louis area anglers,” Otto said, “the hotline is updated immediately after we finish stocking for the day.  The number is toll free from anywhere in the St. Louis area.  A recorded message lets anglers know when and where fish were stocked, the total number and species stocked.”

Anglers are encouraged to call the hotline at 636-300-9651 to get the latest information.  Trout stocking will begin the first week in November.

For information about fishing, go online at https://huntfish.mdc.mo.gov/fishing.