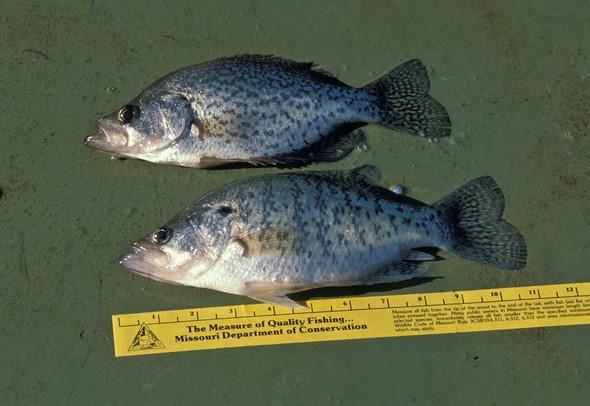 Caption
The fish on top is a black crappie, as the dark spots are in an irregular pattern. White crappie have dark spots that form a vertical pattern on their sides.
Right to Use
1/1
Image 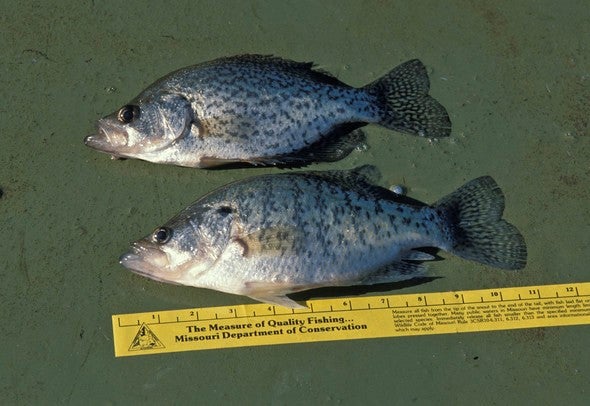 Is user submitted
Caption
The fish on top is a black crappie, as the dark spots are in an irregular pattern. White crappie have dark spots that form a vertical pattern on their sides.
Right to Use
News from the region
Northwest
By
Bill Graham
Published Date
04/22/2020
Body

Kansas City, Mo. – A new crappie length and creel limit regulation at Smithville Lake is off to a good start. Anglers can now harvest 30 crappie per day, but no more than 15 crappie can be longer than nine inches. Previously, anglers could only keep 15 crappie over nine inches.

The change is designed by Missouri Department of Conservation (MDC) biologists to allow more adult black crappie undersized fish to be harvested while protecting the white crappie population. White crappie tend to grow faster and larger in Smithville Lake, while in past years large numbers of black crappie were stunted and not reaching the nine-inch length limit. The Missouri Conservation Commission approved the change in 2018, and this is the second spring when anglers will have a good chance to catch crappie as they move in close to shore to spawn.

Anglers harvested large numbers of black crappie once the regulation change was in place, said Eric Dennis, MDC fisheries management biologist. But also, fish population surveys at the lake last autumn showed increased average sizes for black crappie. With less competition for food, the black crappie may be growing faster because there are more bait fish available for them to eat and they have to exert less energy to get them.

“In October and November, they were showing off-the-chart growth,” Dennis said.

MDC has 30 years of fish population survey data for comparisons. Prior to the change, through the years only 2 percent of the black crappie sampled in fall surveys were nine inches or longer, a size that provides good fillets for eating fish.

But last autumn, “it jumped to being 39 percent of the black crappie were over nine inches,” Dennis said. White crappie sizes improved, too.

MDC staff also checked anglers at the lake during the past year. They were catching plenty of black and white crappie, including good success this past winter fishing from the docks.

“Most people seem to be sticking to the regulations,” Dennis said. “The people I talked to who were fishing were very positive. They were taking the black crappie, and an 8 and a half-inch fish has a nice fillet. I’m very anxious to see how this all plays out in the next couple of years.”

White crappie have faint vertical bars on their sides as a color pattern. They have six dorsal fin spines. Black crappie are silvery with a color pattern on their sides that is mainly irregularly arranged dark speckles and blotches, not vertical bars. The dorsal fin has seven or eight spines. Both species are among Missouri’s most popular panfish.

MDC urges that anglers follow physical distancing guidelines recommended by health officials as a precaution against the COVID-19 virus, including at MDC boat ramps, parking lots, and fishing lakes.

For more information about fishing in Missouri, visit http://mdc.mo.gov/fishing. Also, MDC’s MO Fishing app allows anglers to use digital devices to check regulations, find places to fish, and even get GPS coordinates for sunken brush piles in lakes that attract fish. To download the app, visit https://short.mdc.mo.gov/ZJZ.