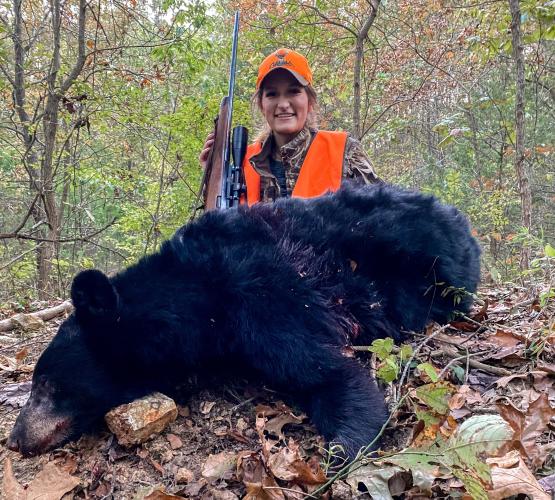 Caption
Congratulations to Kelsie Wikoff of Hume on her harvest of this 268-pound boar (male bear) in Zone 1 during Missouri’s first bear-hunting season.
Credit
Kelsie Wikoff
Right to Use
1/2
Image 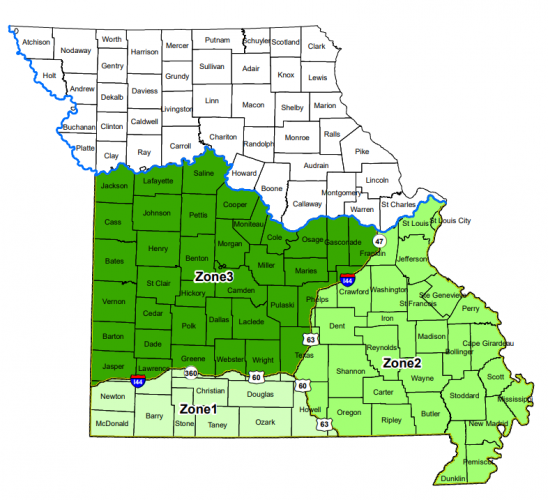 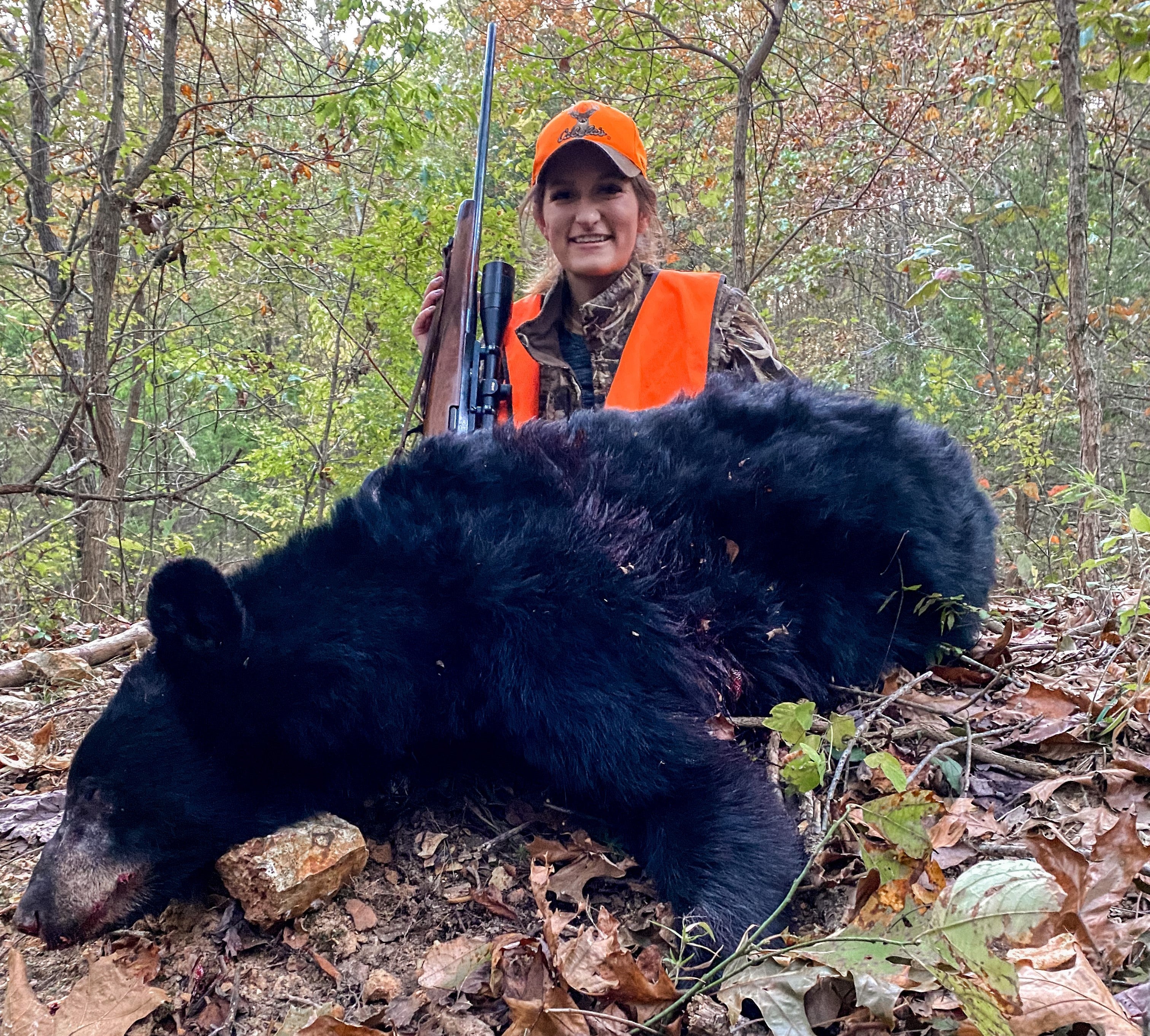 Is user submitted
Caption
Congratulations to Kelsie Wikoff of Hume on her harvest of this 268-pound boar (male bear) in Zone 1 during Missouri’s first bear-hunting season.
Credit
Kelsie Wikoff
Right to Use
Image 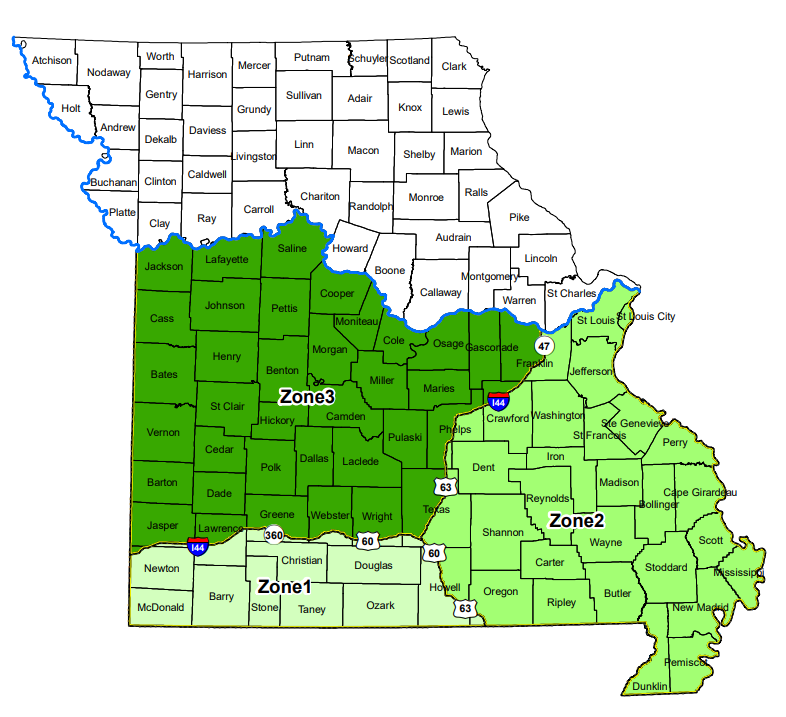 JEFFERSON CITY, Mo. – The Missouri Department of Conservation (MDC) reports that Missouri hunters harvested 12 black bears during the state’s inaugural bear-hunting season, which ran Oct. 18–27. More than 6,330 hunters applied for 400 permits for the season with the maximum total harvest for the season being 40 bears.

“This was an incredibly successful first bear hunting season for Missouri given that we have a highly regulated season, that bears in the state are widely distributed throughout some pretty rugged wilderness, and that many hunters had never hunted bears before,” said MDC State Furbearer and Black Bear Biologist Laura Conlee. “A harvest of 12 bears in our first season is testament to the hunters. Bear hunting is an extremely challenging endeavor, especially under the framework that we established. This was a new experience for many hunters, and they put in the work to be successful and take advantage of this new hunting opportunity.”

Conlee added that MDC took a conservative approach in developing its bear-hunting regulations.

“Our highly regulated and limited season included a sustainable maximum harvest of 40 bears, which is about 5% of our total bear population,” Conlee said. “We also prohibited baiting and the use of dogs, limited hunting to 10 days, and restricted the number of hunters who could participate. With any new season, it is difficult to predict hunter success, so we took a conservative approach to limiting the number of hunters and length of the hunting season. This was to ensure we didn’t overharvest the bear population in any one zone.”

Bear hunting in Missouri is limited to Missouri residents and restricted to three designated areas of southern Missouri called Bear Management Zones (BMZ). Each permit issued is for a specific BMZ and hunting is limited to public or private property within the BMZ. Permit and harvest quotas for the 2021 bear season were:

The more than 6,330 hunters who applied during May to hunt a specific BMZ paid a $10 application fee. The 400 hunters selected for permits through a random drawing of all applicants then paid a permit fee of $25.

Among those selected for permits, Kelsie Wikoff of Hume harvested a 268-pound boar (male bear) in Zone 1. She said she had spent 48 hours in a tree stand over three days since the season began Oct. 18 and harvested the bear Oct. 21.

Including Wikoff’s harvest, black bears harvested during the first season were from the following BMZs:

According to the Wildlife Code of Missouri, the harvest limit is one bear per permit. Only lone black bears may be taken. Hunters may not take bears that are known to be in the presence of others bears, including female black bears with cubs. Bears may not be disturbed, pushed, harassed, or taken from a den. Bear hunters must wear hunter orange, make reasonable efforts to retrieve shot bears, and may not leave or abandon commonly edible portions. Learn more about bear hunting in Missouri at mdc.mo.gov/bearhunting.

Black bears were historically abundant throughout the forested areas of Missouri prior to European settlement but were nearly eliminated by unregulated killing in the late 1800s, as well as from habitat loss when Ozark forests were logged. Over the last 50 years, bear numbers and range in Missouri have grown to around 800 black bears with most found south of the Missouri River and primarily south of Interstate 44. Missouri bear range is expanding. Bear numbers in Missouri are increasing each year by approximately 9% and are expected to double in less than 10 years. As bear numbers continue to increase, MDC will use a highly regulated hunting season as an essential part of population management. MDC’s 2020-2030 Black Bear Management Plan will guide bear management in Missouri for the next decade. Learn more about black bears in Missouri and MDC management efforts at mdc.mo.gov/bears.