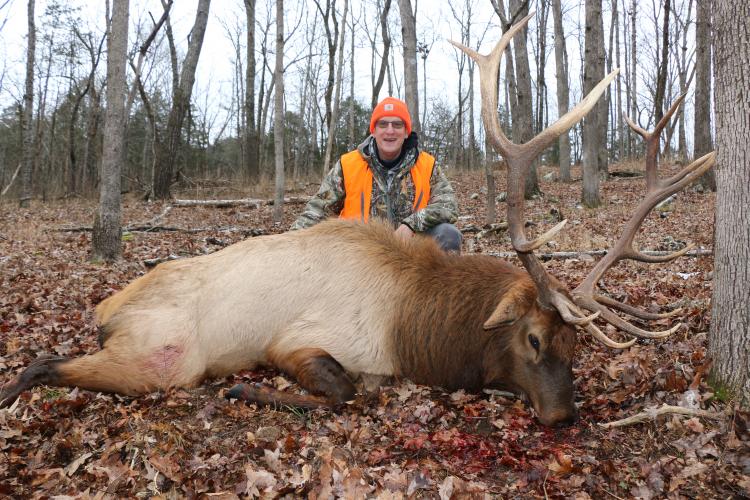 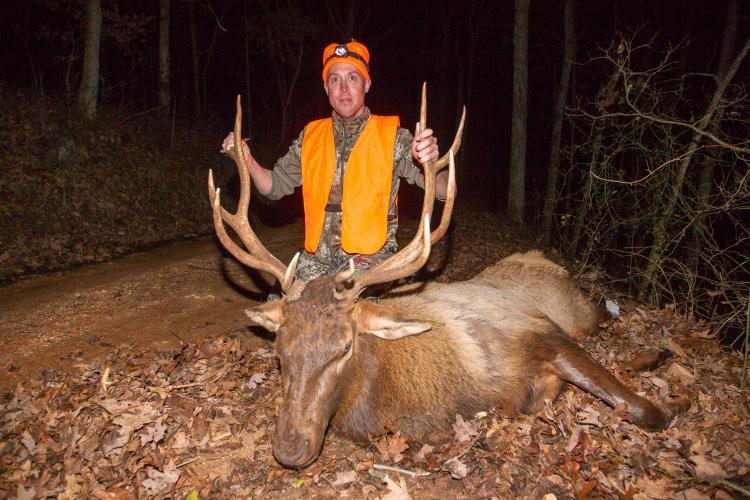 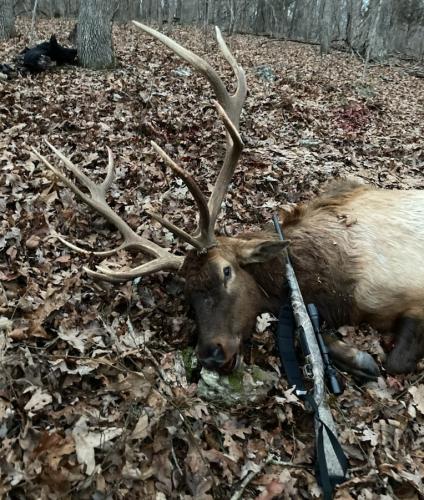 Caption
Michael Buschjost of St. Thomas took this 6x6 bull elk Dec. 15 outside of the refuge portion of the MDC Peck Ranch Conservation Area.
Credit
MDC
Right to Use
3/5
Image 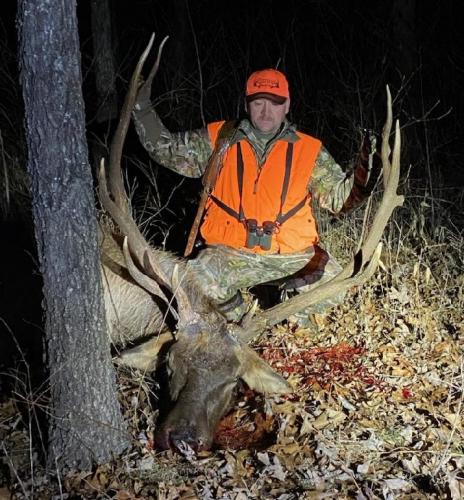 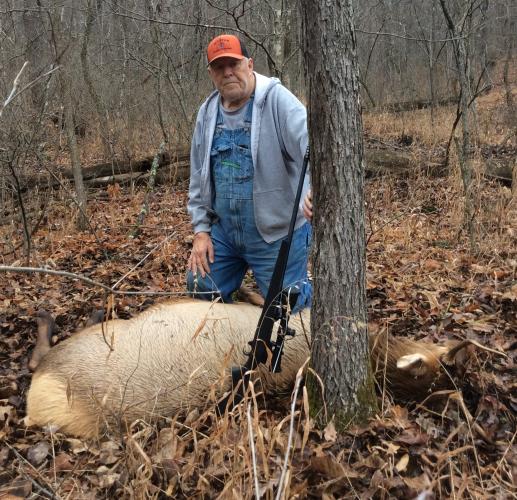 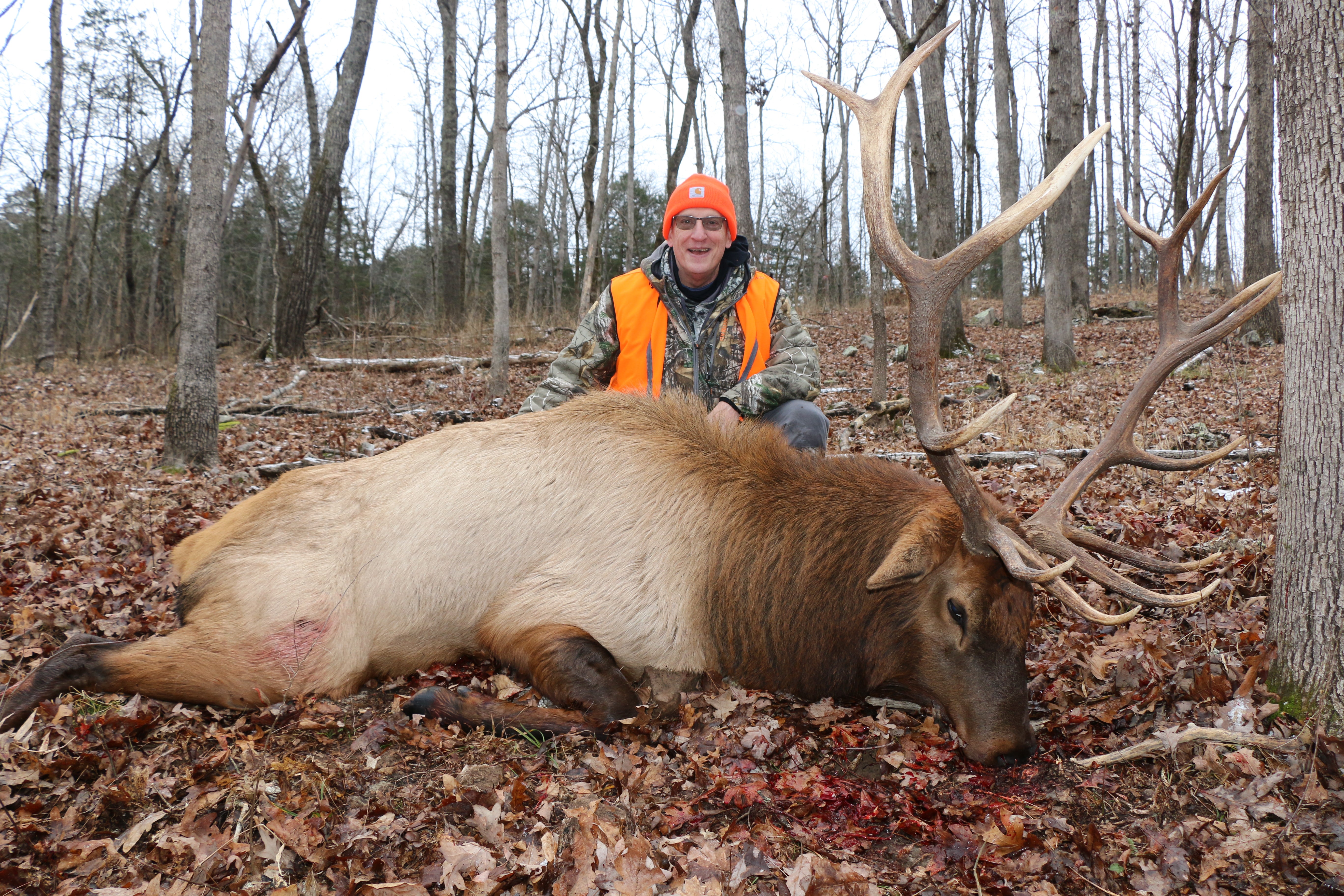 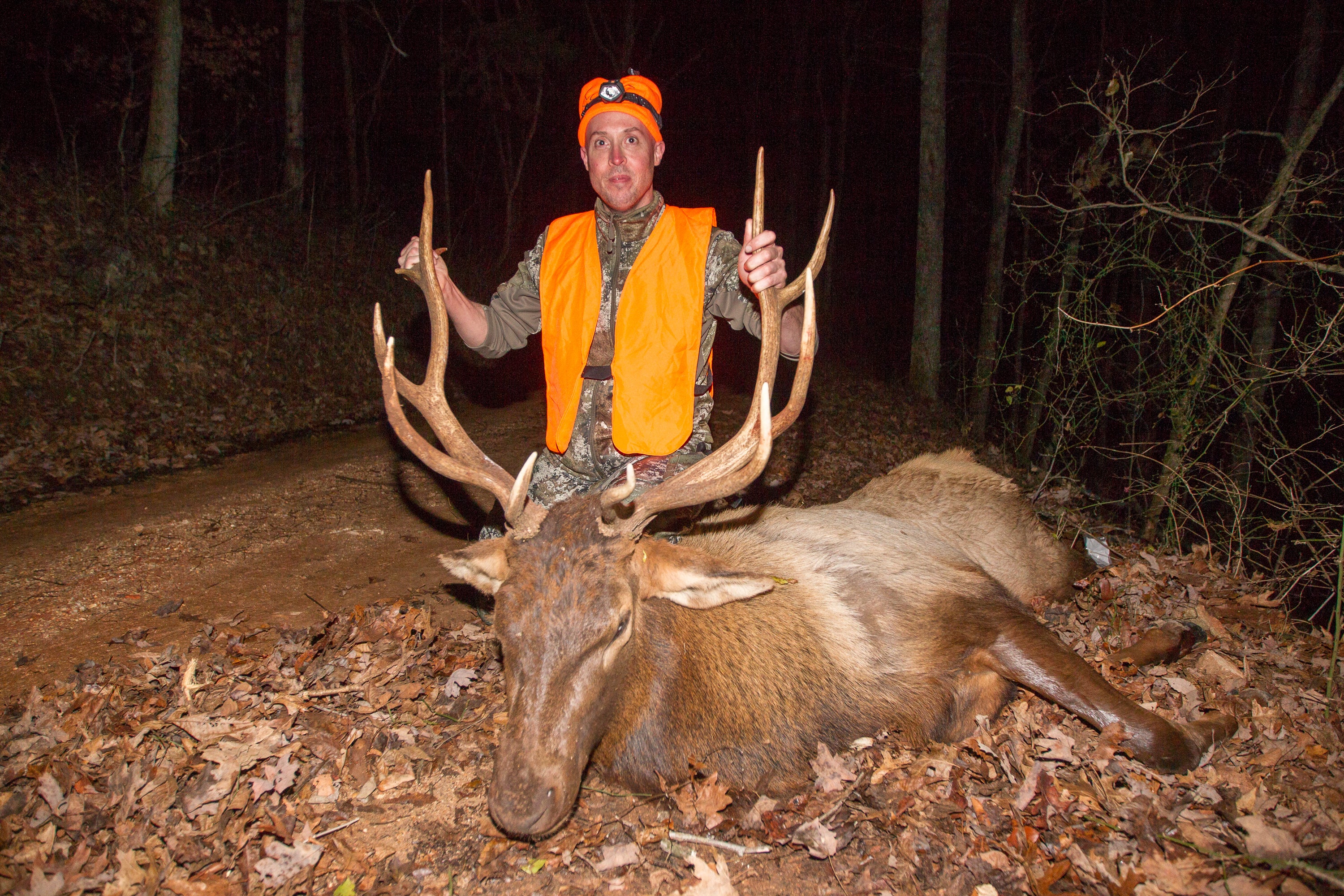 Is user submitted
Caption
Michael Buschjost of St. Thomas took this 6x6 bull elk Dec. 15 outside of the refuge portion of the MDC Peck Ranch Conservation Area.
Credit
MDC
Right to Use
Image 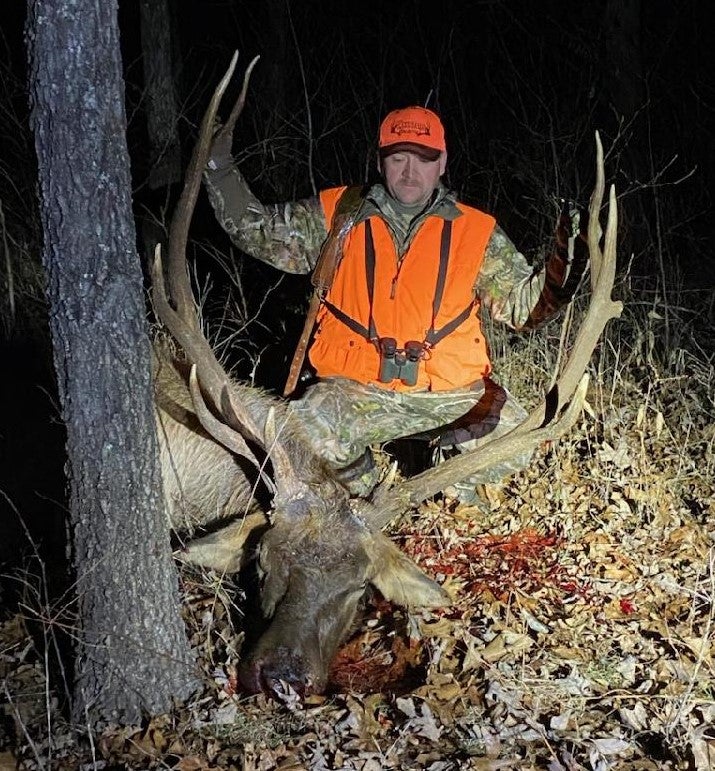 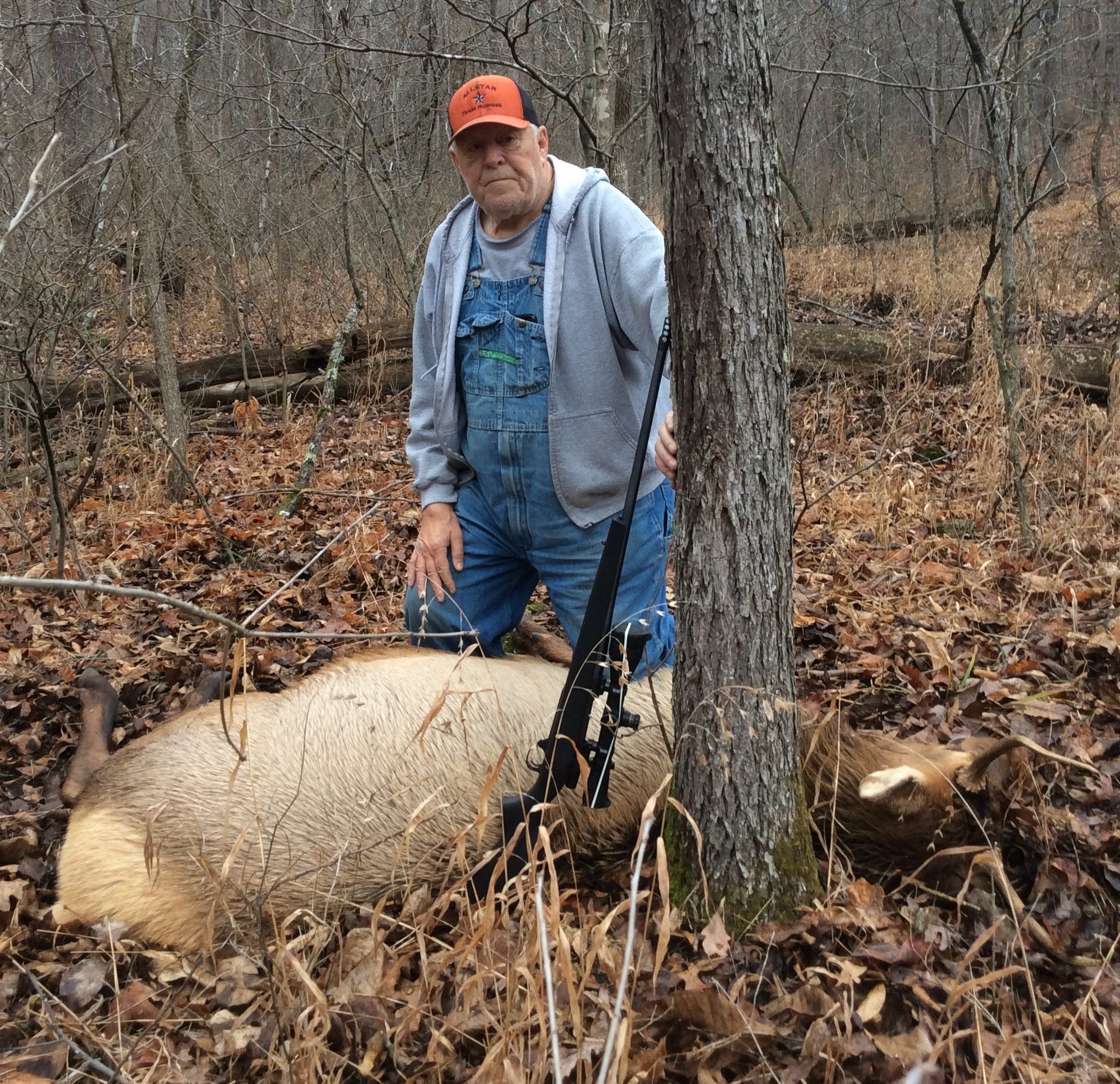 JEFFERSON CITY, Mo. – Missouri’s first elk-hunting season ended Sunday with all five of the hunters selected for permits harvesting bull elk during the firearms portion Dec. 12-20. An archery portion ran Oct. 17-25 with no harvests. The five Missouri hunters were selected for elk-hunting permits through a random drawing of more than 19,215 permit applications, including 33 for one resident-landowner antlered-elk permit and 19,182 for four general permits.

The Missouri Department of Conservation (MDC) congratulates the five Missouri hunters on their success!

“What an exciting gift right before the holidays to see all five hunters harvest elk in this first inaugural elk season in Missouri,” said MDC Director Sara Parker Pauley. “This success also showcases the hard work and collaboration of our Commission, staff, partners, landowners, and citizens. One of the hunters called me personally just a few minutes after he harvested an elk full of excitement and thanks, but the real thanks goes to the bigger team for making this happen.”

Joe Benthall of Mount Vernon, who was drawn for an antlered-elk general permit, harvested a 5x5 bull elk Dec. 12 on National Park Service property near Log Yard in Shannon County. He was the first of five Missouri hunters selected for elk permits to harvest an elk. Benthall has been deer hunting off and on for 25 years and had not hunted elk before. He says he applied for the Missouri opportunity because he has wanted to hunt elk but has not had the time or money for a trip out west. He added that he only hunted during the firearms portion.

Michael Buschjost of St. Thomas, who was drawn for an antlered-elk general permit, took a 6x6 bull elk Dec. 15 outside of the refuge portion of the MDC Peck Ranch Conservation Area. He has hunted elk in Montana, Colorado, and Wyoming with two bulls and a cow elk harvested from those efforts. He said he was excited to hunt elk in Missouri and to take his three kids with him to scout the area before the season opened.

Sam Schultz of Winfield, who was drawn for an antlered-elk general permit, harvested a 5x6 bull elk Dec. 15 on private property in Shannon County. Schultz has been hunting for 30 years and he mostly hunts deer and turkey. He has successfully hunted elk before in Colorado back in the early 2000s.

“My elk was originally a 6x7 bull, but he had two broken antler tines, which left him to be a 5x6,” said Schultz. “It was a tough hunt, but I had a blast doing it. Best of all was one of my boys was with me when I harvested this awesome animal. Thank you, MDC, for bringing them back to Missouri.”

Gene Guilkey of Liberty, who was drawn for an antlered-elk general permit, harvested a 6x7 bull elk on public land in Shannon County Dec. 16.

“I have never hunted elk before and this hunt was the dream trip of a lifetime,” Guilkey said. “I literally dreamed of taking a 6x6 bull but didn’t think it was possible nor would I be up to it, but the good Lord above had better plans than I did!”

He added, “When I harvested this bull, I was stressed, relieved, and overjoyed all at the same time. I screamed loud enough that quite possibly all three counties involved could hear me!  What a thrill! Taking this trophy was the hardest hunt I have encountered. It took a lot of scouting before and during the archery season to get the terrain laid out. During the hunt, we were delighted to find this bull on day three and focused on the area he was spotted in. He was actually bugling, which was an experience we did not expect so late after the rut. These are amazing animals!”

Bill Clark of Van Buren, who was drawn for the resident-landowner antlered-elk permit, harvested a bull elk on his property Dec. 19. Clark is a life-long hunter of deer, turkey, and small game. He has also pursued elk in Colorado and Wyoming in the 1990s. He and his family own 80 acres east of Peck Ranch Conservation Area where they conduct timber-stand improvements on the heavily forested property and also plant clover and native grasses for elk and other wildlife. Clark says he applied for the elk hunt because he supports MDC’s elk restoration and management efforts, wildlife management in general, and wanted to help the herd by thinning a bull.

“I see elk on our land all the time,” Clark said. “I’m nearly 80 and use a cane and a crutch so I’m limited in my mobility. I was standing on my back deck and saw a group of cow elk about 100 yards through the trees in the yard with a spike bull with them. He stopped, and that was the shot I had and the shot I took. We then broke down the carcass and are processing it ourselves.”

Clark added, “I’m really happy to represent what I believe to be one of the most important hunts of my life. This program is an example of one of the best things to happen for the people of Missouri in years, and I’m nearly 80 years old.”

Elk are a native species in Missouri but were hunted to extinction in the state through unregulated hunting during the late 1800s. Missouri’s first elk hunt this fall came after years of restoration efforts of the native species by MDC, numerous partners including the Rocky Mountain Elk Foundation, and many supporters including local communities and area landowners. Learn more about elk restoration in Missouri at short.mdc.mo.gov/ZYJ.

Learn more about elk hunting in Missouri online at huntfish.mdc.mo.gov/hunting-trapping/species/elk.