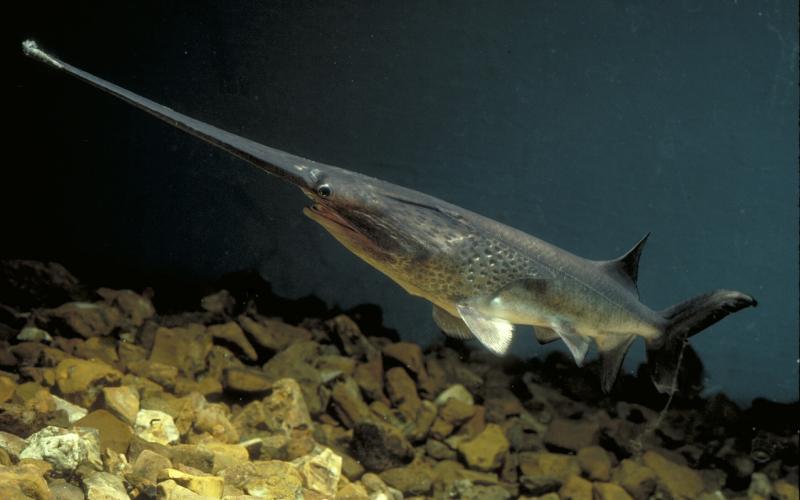 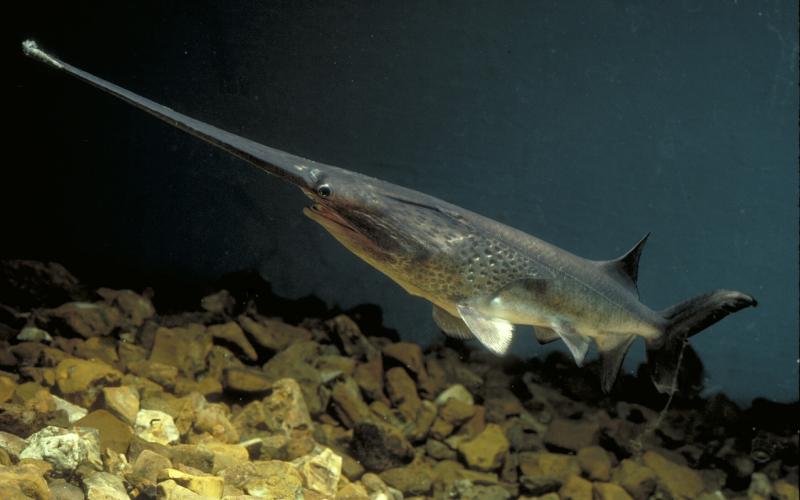 Is user submitted
Caption
Missouri’s major paddlefish snagging waters include Lake of the Ozarks, Truman Lake, and Table Rock Lake. The paddlefish snagging season for these and most other waters in the state runs March 15 through April 30. The season for the Mississippi River is March 15 through May 15 with a fall season of Sept. 15 through Dec. 15.
Credit
MDC
Right to Use
News from the region
Statewide
By
Joe Jerek
Published Date
02/19/2019
Body

JEFFERSON CITY, Mo. – Imagine catching a giant, prehistoric fish whose ancestors swam during the time of dinosaurs. That is a reality for thousands of paddlefish snaggers during Missouri’s annual spring paddlefish snagging season. Paddlefish -- named for their large, paddle-shaped snouts -- are an ancient species that can grow to seven feet and weight more than 100 pounds.

Unless exempt, anglers must have a current fishing permit to snag or to operate a boat for snaggers. Once two legal-sized paddlefish are caught, they must be kept by the snagger and included in their daily limit. The daily limit is two paddlefish and snaggers must stop snagging after obtaining the daily limit on Lake of the Ozarks and Truman Lake and their tributaries, and the Osage River below the U.S. Highway 54 bridge.

MDC makes paddlefish snagging possible in the Show-Me State through the annual stocking of tens of thousands fingerling paddlefish raised at its Blind Pony Hatchery near Sweet Springs. The fingerlings are released into Lake of the Ozarks, Truman Lake, Table Rock Lake, and the Black River. Last year, MDC stocked more than 78,000 foot-long paddlefish, about twice the normal stocking. These fish will be large enough to harvest beginning in 2024.

MDC reminds snaggers that it is very important to immediately release sublegal fish for future harvests and offers these tips:

Snag A Tag - Get A Reward

MDC is in the final year of a five-year tagging project to help monitor paddlefish numbers and improve species management. MDC staff have placed metal jaw tags on thousands of paddlefish in Lake of the Ozarks, Truman Lake, Table Rock Lake, and the Mississippi River.

Staff have also implanted transmitters in thousands of paddlefish at these locations to track their movements and gain other important research information. MDC asks snaggers to NOT remove tags or transmitters from sublegal paddlefish.

Report fish with jaw tags or transmitters by calling 573-579-6825 or by e-mailing Trish Yasger at Trish.Yasger@mdc.mo.gov. Those submitting tags will receive a “I Caught a Missouri Paddlefish” t-shirt and are eligible for rewards up to $500. Snagger can keep jaw tags, but MDC needs a picture of the tag to verify the tag number.