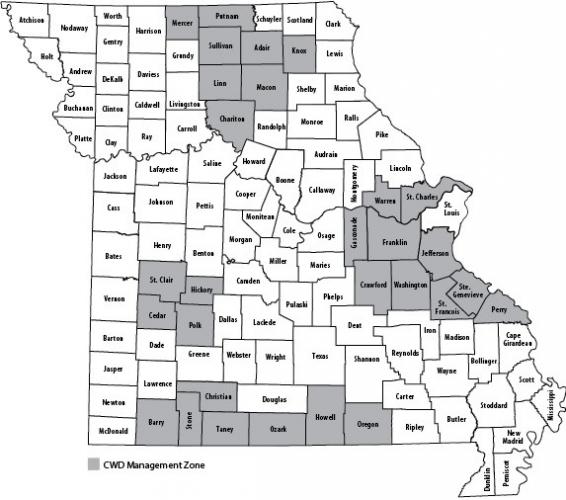 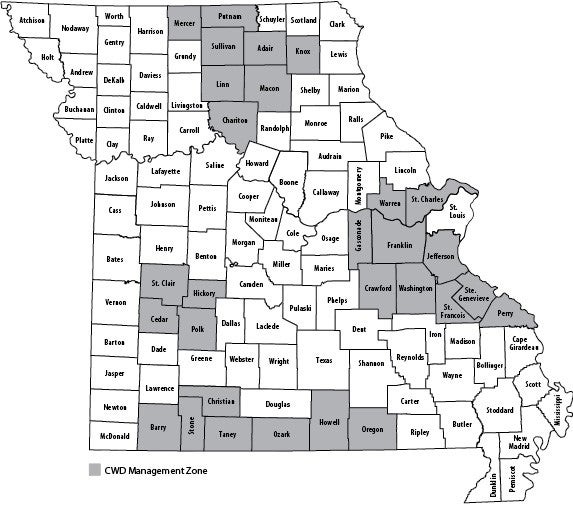 Is user submitted
Caption
MDC has reduced its CWD Management Zone (shaded counties) starting this July. The move is in response to new research findings on deer movement. The new zone will impact a feeding ban, antler-point restrictions, antlerless permits for some counties, and mandatory CWD sampling.
Credit
MDC
News from the region
Statewide
By
Joe Jerek
Published Date
06/24/2019
Body

JEFFERSON CITY, Mo. – The Missouri Department of Conservation (MDC) announces it has reduced the number of counties in its management zone for chronic wasting disease (CWD) from 48 to 29 starting in July. Changes to the CWD Management Zone will impact restrictions on feeding deer, antler-point restrictions, antlerless permits for some counties, and mandatory CWD sampling.

CWD is a deadly, infectious disease in white-tailed deer and other members of the deer family. The disease has no vaccine or cure and eventually kills all deer it infects. CWD is spread from deer to deer and through the environment. MDC has found 116 cases of CWD in Missouri since 2012. Learn more at mdc.mo.gov/cwd.

In response to finding CWD in Missouri, MDC created a CWD Management Zone around where confirmed cases of the disease have been found to help track and limit its spread.

MDC designed the CWD Management Zone in 2012 to include counties within 25 miles of where cases of CWD have been found. The 25-mile-radius was based on existing research from other states that shows deer may disperse up to 25 miles from the area where they were born, especially young bucks in search of territory or mates.

Based on this recent research, MDC is removing the following counties from its CWD Management Zone because they are more than 10 miles from locations where cases of CWD have been found: Benton, Bollinger, Boone, Callaway, Cape Girardeau, Carroll, Cole, Cooper, Dade, Grundy, Livingston, Madison, McDonald, Miller, Moniteau, Morgan, Osage, Randolph, Schuyler, Scotland, Shelby, and St. Louis.

MDC notes that Cole and Moniteau counties were removed because no cases of CWD have been found in the area after extensive follow-up CWD testing after a single case was confirmed in Cole County in 2015.

MDC added Christian, Howell, and Oregon counties to the CWD Management Zone because of recent CWD detections in Oregon, Stone, and Taney counties.

Resulting Regulation and Other Changes

MDC will require hunters who harvest deer in any of the 29 counties of the CWD Management Zone during the opening weekend of the fall firearms deer season (Nov. 16 and 17) to take their harvested deer (or the head with at least six inches of neck attached) on the day of harvest to one of MDC’s numerous CWD sampling stations throughout the zone. Hunters who harvest deer in counties no longer part of the zone are not required to participate in mandatory sampling.

MDC reminds hunters that the change in the CWD Management Zone will also impact restrictions on feeding deer, antler-point restrictions, and antlerless permits for some counties.

Feeding deer or placing minerals for deer unnaturally concentrates the animals and can help spread CWD. Therefore, the Wildlife Code of Missouri prohibits the placement of grain, salt products, minerals, and other consumable natural and manufactured products used to attract deer year-round within counties of the CWD Management Zone. The feeding ban no longer applies to counties removed from the zone.

MDC notes the antler-point restriction (APR) for deer hunting does not apply to counties in the CWD Management Zone. Protecting young bucks from being harvested in areas where CWD has been found can increase the spread of the disease. The APR has been reinstated for some counties removed from the zone.

MDC also notes the increased availability of firearms antlerless permits for some counties in the CWD Management Zone can help prevent undesired population increases in local deer numbers around where CWD has been found.