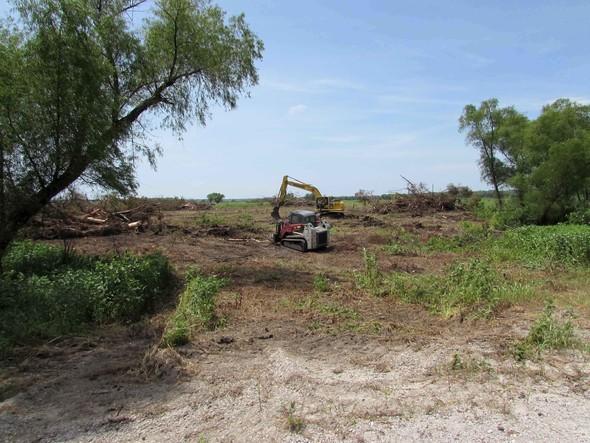 Caption
Work has begun on a major renovation of wetlands and Schell Lake at the Schell-Osage Conservation Area. Partnerships between MDC and the conservation community make the project possible.
Right to Use
1/1
Image 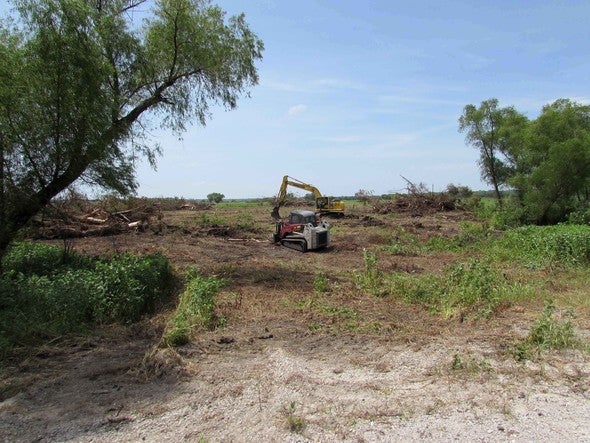 Is user submitted
Caption
Work has begun on a major renovation of wetlands and Schell Lake at the Schell-Osage Conservation Area. Partnerships between MDC and the conservation community make the project possible.
Right to Use
News from the region
Kansas City
By
Bill Graham
Published Date
07/31/2020
Body

Schell City, Mo. – A major renovation of wetlands at the Schell-Osage Conservation Area is moving forward with help from a $1 million match grant from the federal North American Wetlands Conservation Act (NAWCA). The Missouri Department of Conservation (MDC) and Ducks Unlimited (DU) will use the grant to match the $3.5 million that has been dedicated from a diverse group of conservation partners to improve the area for waterfowl, wildlife watchers, hunters, and anglers.

When complete, this project will improve wetland habitat for resting and feeding waterfowl, as well as other wetland species. Fishing improvements will also be made a Schell Lake.

Heavy rains caused Truman Lake to exceed flood records for both duration and crest height last year. The wetlands along the Osage River, including those at Schell-Osage, have been mostly under water the past 18 months. An attempt was made to initiate the brush clearing contract last December, but it was just too wet to work.

Recently, the floodplain has been finally drying out. That has allowed heavy equipment to begin removing brush such as buttonbush and willows within the footprint of future dirt work. As the last year and half has shown, getting in and out of the bottoms quickly is a challenge for wetland projects. Knocking out this clearing work ahead of time will help the next stage of renovation.

The Sac-Osage Electric Cooperative is nearly finished running new overhead electric poles and lines to the area headquarters. That will power a new pump station slated for construction on the bank of the Osage River. This will increase the flexibility of water management across the area and greatly reduce the dependence on water from Schell and Atkinson Lakes

NAWCA match grants encourage public-private partnerships to protect, restore, and manage wetland habitats by awarding matching funds to high-priority projects. Missouri has a long history of success with NAWCA grants to extend the impact of our dollars by working with partners and adding matching funds. To date over 99,800 acres of wetlands across Missouri have received $19.8 million through NAWCA, which has been added to the total of $119 million in partner contributions.

A key partner in the project is DU. The waterfowl and wetland conservation group helped design the new water management levees and structures. DU’s participation also made possible the NAWCA grant and they are providing engineering services for the project.

“Not only will this benefit fall migrating waterfowl in the future, but 289 bird species use the area throughout the year,” said Frank Nelson, MDC environmental resource scientist.

Hunting blinds will remain a feature of the area. Schell-Osage has a long tradition serving waterfowl hunters and that will continue when the project is complete.

Waterfowl hunting on the area during the upcoming seasons will be allowed through self-registration at the headquarters. Habitat will be opportunistic and dependent on precipitation and flooding from the river. The Wildlife Refuge, Waterfowl Refuge and Waterfowl Hunting zone closures remain in effect on the same acreage as in the past.

Anglers are still able to fish in Atkinson Lake, but it is closed from Oct. 15-Jan. 31 as a Waterfowl Refuge. The upper end of Truman Reservoir is fed by the Osage River and borders the 8,633-acre conservation area in Vernon and St. Clair counties. The lake and river are open for fishing. Upland fields and forests at Schell-Osage will remain open to hunting, hiking, and birding.

To follow updated plans and work progress, visit https://short.mdc.mo.gov/Z5C. The page also has a link for those who want to sign up for updates via email.

For information about other MDC wetlands and waterfowl hunting opportunities, visit https://short.mdc.mo.gov/ZQg.