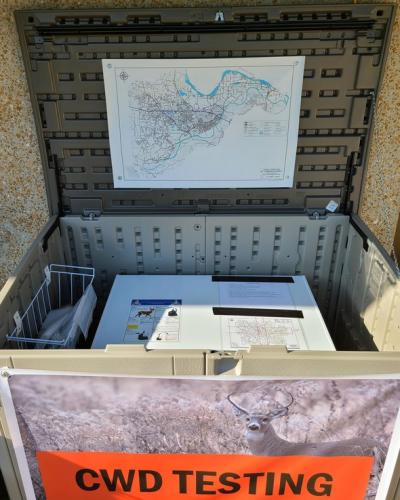 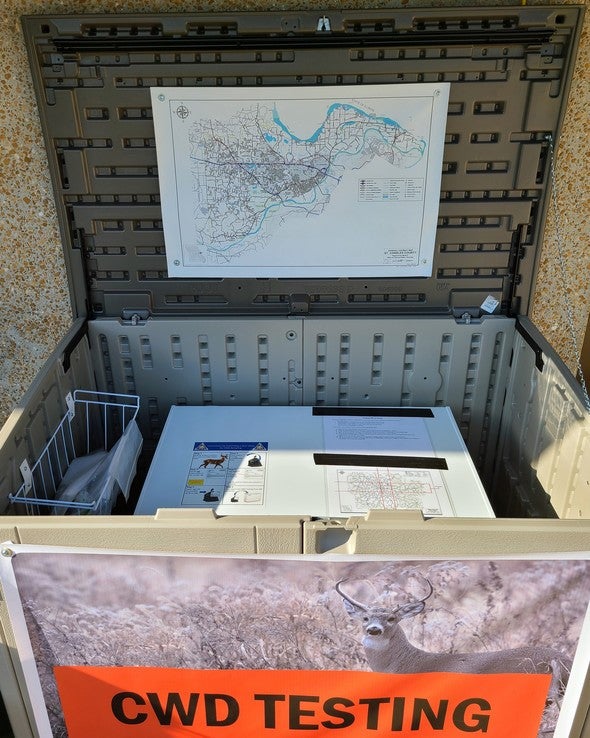 St. LOUIS, Mo—To make it easier for deer hunters to help monitor Chronic Wasting Disease (CWD), the Missouri Department of Conservation (MDC) has deployed deer head drop-off sites in six counties in the St. Louis region.  Each site has a freezer that will preserve the samples, which will be picked up later by MDC staff for CWD testing.  To submit a deer head for testing, hunters will be required to cut off the head in advance, so it can be left in the freezer.

The goal is to provide hunters an additional way of submitting their harvested deer for voluntary CWD testing.  These self-serve drop sites will enable hunters to submit deer heads for sampling at their convenience throughout the 2022-2023 fall deer hunting season.

The sample drop-off sites in the St. Louis region include:

For an interactive map showing all voluntary CWD testing drop off sites throughout the state, go to https://short.mdc.mo.gov/ZCH.

Hunters should cut off the deer head (and antlers for any bucks) while leaving about six inches of neck attached before coming to the drop-off location.  Materials will be available at the freezer sites, such as trash bags, zip ties, and data sheets, that hunters can use in labeling the heads.

Hunters will need to record their name and contact information, as well as their Telecheck ID numbers and the location the deer was harvested.  They can then simply leave the head in the freezer.  Staff will collect the head and pull the samples to be submitted for testing.

The drop-off sites will not be available for use during the opening weekend of the firearms deer season (Nov. 12-13) in counties where mandatory CWD sampling is required.  Hunters harvesting deer in mandatory CWD sampling counties must use the MDC staffed sampling locations normally used for CWD Mandatory Sampling during the opening weekend. The drop-off sites will still be open in St. Charles and Warren counties, as these have been excluded from mandatory sampling during the 2022 season. The sites in these counties will provide a voluntary sampling option for those hunters who would still like to get their deer tested.

Hunters will be able to check the results themselves online using their Telecheck ID at within three weeks.  MDC will notify a hunter directly if their sample returns a positive result.  The Centers for Disease Control does not recommend consuming meat from a deer that has tested positive for CWD.

CWD is a neurological disease that is fatal to deer.  A deer may be infected with no visible symptoms.  The only way to positively identify the presence of CWD is to extract lymph nodes from the animal’s neck.  The disease has been confirmed in Jefferson, Franklin, Washington, and Crawford counties in MDC’s St. Louis region, as well as 18 other counties elsewhere in the state.  Hunters can play an important role in helping MDC monitor and track the disease in Missouri by providing this valuable data.

Hunters who harvest deer from any of the 34 CWD Management Zone counties are reminded that they must follow carcass transportation restrictions when traveling to CWD testing sites. Visit  mdc.mo.gov/cwd, or see the 2022 Fall Deer & Turkey Hunting Information and Regulation booklet for details.