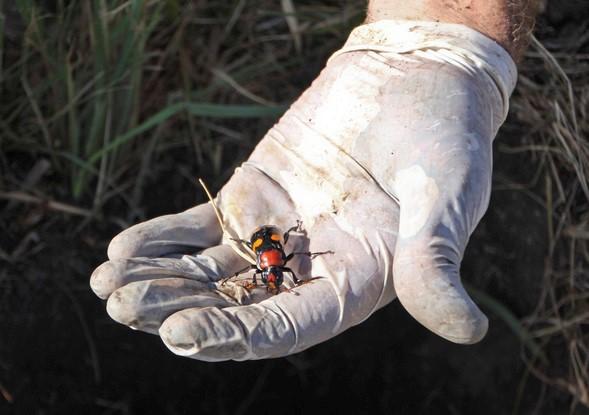 Caption
MDC and partners are working to restore the unique American burying beetle to Missouri's prairies and woodlands. This is part of a national effort that recently prompted the U.S. Fish and Wildlife Service to down list the beetle's status from endangered to threatened on the federal endangered species list.
Credit
MDC
Right to Use
1/1
Image 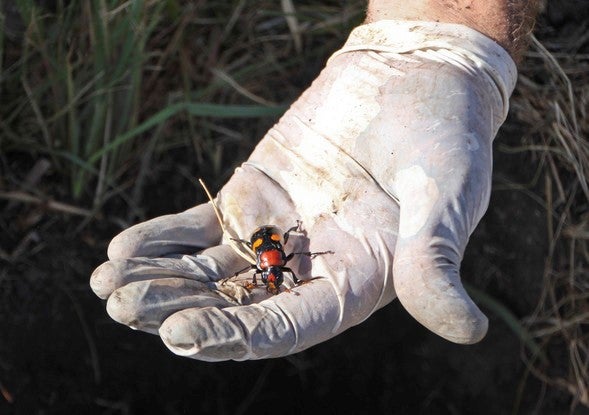 Is user submitted
Caption
MDC and partners are working to restore the unique American burying beetle to Missouri's prairies and woodlands. This is part of a national effort that recently prompted the U.S. Fish and Wildlife Service to down list the beetle's status from endangered to threatened on the federal endangered species list.
Credit
MDC
Right to Use
News from the region
Kansas City
By
Bill Graham
Published Date
09/14/2020
Body

El Dorado Springs, Mo. – The American burying beetle, reintroduced at two southwest Missouri prairies, has been down listed by the U.S. Fish and Wildlife Service (USFWS) from endangered to threatened on the nation’s endangered species list. This change will not alter efforts by the Missouri Department of Conservation (MDC), the Saint Louis Zoo, and The Nature Conservancy (TNC) to restore a sustainable population of these unique insects in the state.

The beetles released in recent years at Wah’Kon-Tah Prairie and Taberville Prairie conservation areas in St. Clair County were raised by the Saint Louis Zoo WildCare Institute. They are considered a non-essential population by the USFWS because they are not part of a surviving wild population. The non-essential designation means that there are no restrictions placed on land uses. Any farms and ranches in the release area can operate as normal.

These large beetles feed and care for their young, which is rare among insects. Mated pairs dig holes to bury themselves, and they drag carrion such as dead birds in the cavity as food. Then underground they hatch, feed, and rear young beetles. The parent pair and grown beetles then emerge above ground. Thus, they play a role as nature’s undertakers as they feed on carrion in prairies, woodlands, and forests. A beetle pair’s underground rearing of young also helps soil aeration and fertility, a part of the dynamic ecological processes found in prairies and woodlands.

American burying beetles were once found throughout Missouri and much of the United States. Their decline due to habitat changes led to their extirpation from Missouri, and extirpation or severely reduced populations in other states. In 1989, they became the first insect added to the nation’s endangered species list.

A Missouri restoration effort led by the Saint Louis Zoo began at Wah’Kon-Tah Prairie Conservation Area in 2012. Much of that prairie is owned by TNC but is managed by MDC, which owns some tracts. Annual releases and monitoring have shown natural reproduction is occurring. Biologists are now monitoring their presence annually on the prairie to see if the population sustains itself naturally. MDC’s Taberville Prairie Conservation Area is now also a release site.

Native essential populations are known to exist in Rhode Island and five states west of the Mississippi River. Missouri shares a status with the Massachusetts island of Nantucket as hosting an introduced nonessential population under USFWS guidelines.

“This change to threatened status does not change our efforts,” Buback said. “We’re still going to monitor this species and many other species we’re protecting or restoring in our state.”