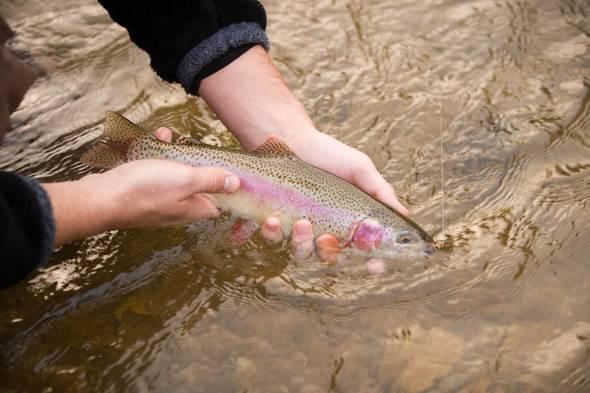 Caption
Record flooding that some areas of the state experienced this spring has caused the Missouri Department of Conservation to adjust its trout stocking rates for 2017. However, anglers can still expect quality fishing experiences at all of the state's trout areas.
Credit
MDC
Right to Use
1/1
Image 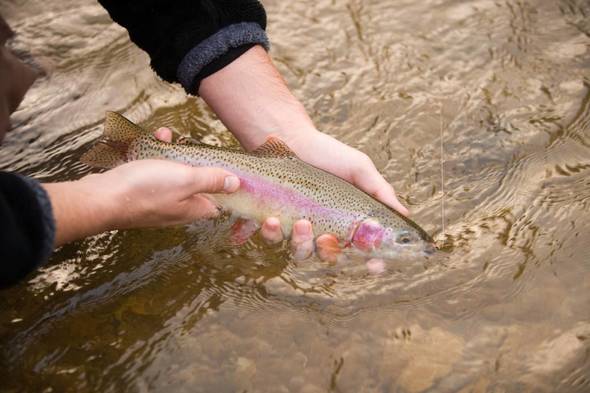 Is user submitted
Caption
Record flooding that some areas of the state experienced this spring has caused the Missouri Department of Conservation to adjust its trout stocking rates for 2017. However, anglers can still expect quality fishing experiences at all of the state's trout areas.
Credit
MDC
Right to Use
News from the region
Southwest
By
Francis Skalicky
Published Date
06/19/2017
Body

SPRINGFIELD, Mo. – The effects of recent flooding are still rippling through the state’s coldwater hatcheries, but anglers can be assured this spring’s record rainfall didn’t wash away prospects for a good year of trout fishing in Missouri.

The Missouri Department of Conservation’s (MDC) coldwater hatchery system is recovering from this spring’s record flooding. This network – which consists of Shepherd of the Hills in Branson, Roaring River near Cassville, Bennett Spring near Lebanon, Montauk near Salem and Maramec Spring near St. James – produces more than two million trout for the state’s trout areas annually. Flooding and flood-related water quality issues at some hatcheries claimed about 30 percent (approximately 280,000 fish) of the fish that were near stocking size. To adjust for this loss, stocking rates at the state’s trout parks and Lake Taneycomo will be slightly reduced for the remainder of 2017. This is similar to last year’s adjustment after the 2015-2016 winter floods. MDC staff will continue to evaluate hatchery fish inventories and stocking plans and will make adjustments throughout the year as appropriate.

These reductions are necessary so the sizes of fish stocked at the trout parks (12 to 12.5-inches) and Lake Taneycomo (11 inches) remain unchanged. It takes 18 – 24 months to produce a trout of appropriate stocking size. Replenishing the fish populations at some of the areas hit by flooding is a year-long and multi-hatchery task, which is the reason for this year’s adjustments. However, because of the connectivity and resiliency of MDC’s trout production system, trout fishing prospects in the state remain strong.

“The Missouri Department of Conservation manages its five coldwater hatcheries as a system,” said MDC Fisheries Division Chief Brian Canaday. “As such, fish are moved between hatcheries to help mitigate for events – such as this spring’s flooding – to ensure we have fish available to stock for the public.” Canaday explained fish of various sizes will be moved between facilities to address stocking needs and take advantage of production space – which is the way MDC’s coldwater hatchery system has always operated.

Hardest hit by flooding was Montauk Hatchery, located at the heart of an April downpour the National Center for Environmental Information called a “once in a millennium rainfall.” Pictures of flooded raceways and temporarily stranded campers at the state park that hit social media in the days after the rain provided irrefutable evidence a significant weather event had hit the state park in Dent County. However, the anglers currently pulling rainbows from Montauk’s waters provide equally clear proof that trout fishing at this popular destination is returning to normal.

“We have gone through a historic flooding event at some of our hatcheries and our staff has done an amazing job of repairing damage done to hatchery infrastructure and managing fish loss,” said MDC Fisheries Ozark Unit Chief Bruce Drecktrah. “We have fish in the system and the remainder of the season is looking good.” Drecktrah adds that many of the fish from Montauk washed out into the Current River, making for excellent trout fishing in the weeks ahead.

“Bottom line – we have fish. That means trout fishing will remain good for the remainder of the 2017 season,” Drecktrah said.