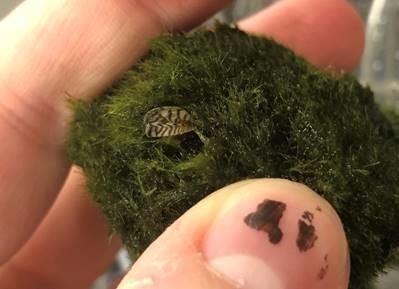 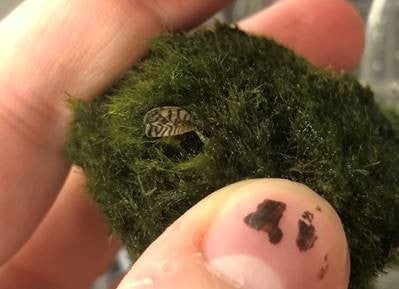 JEFFERSON CITY, Mo. – Zebra mussels, an invasive species that can cause habitat and economic harm if they get established in reservoirs and streams, have recently been found in a type of algae – known as “moss balls” – that are popular with aquarium owners. Because of this, the Missouri Department of Conservation (MDC), as well as fisheries experts across the country, are asking aquarium owners and pet store staff to examine moss balls for these troublesome mollusks. Moss balls that contain zebra mussels have been found in Missouri.

Marimo is a filamentous algae that grows into green velvety balls – hence the name “moss balls.” In the wild, marimo is found mainly in Europe and Asia (primarily Japan). In recent years, their aesthetic appeal has made these plant-like organisms popular in the aquarium trade.

Recently, it has been discovered that some moss balls being commercially sold for aquariums in several states, including Missouri, contained zebra mussels. Experts don’t know how zebra mussels got inside the moss balls, but this discovery reveals a new way these non-native invasive pests can spread.

Any aquarium containing moss balls infected with zebra mussels also has the potential of having zebra mussel larvae (called veligers) in its water. When aquarium water is switched out or if the contents get dumped into a nearby creek or lake, this could introduce zebra mussels into a new body of water.

This further emphasizes what fisheries biologists in Missouri and other states say often: Never dispose of aquarium contents in a nearby body of water because of the harmful non-native organisms this could introduce into local ecosystems. In the case of zebra mussels, the problems can be both biological and economical. The huge clusters these fingernail-sized mussels can form (sometimes as thick as a million mussels per square meter) can cause operational problems for pipes and other water-intake equipment. Their clustering activities can also kill native mussels and disrupt aquatic food chains.

Destroy in one of three ways:

Dispose: Once one of the above-listed “destroy” steps have been taken, dispose of the moss ball and any of its packaging in a sealed plastic bag in the trash. If vinegar, boiling water, or bleach was used, the liquid can be disposed down a household drain. Never pour into a storm drain where it could enter and damage local waterways.

Drain: Drain and clean the aquarium. When draining and cleaning your aquarium, it’s important to follow these steps:

This is an evolving situation, the latest information about how to take care of zebra mussel-infected moss balls and aquarium systems can be found at fws.gov/fisheries/ANS/zebra-mussel-disposal.html.

MDC thanks people and businesses for their help in preventing the spread of this invasive species and for helping to protect Missouri’s natural resources.

More information about how to prevent the spread of zebra mussels in Missouri can be found at huntfish.mdc.mo.gov/fishing/protect-missouri-fishing/zebra-mussels.