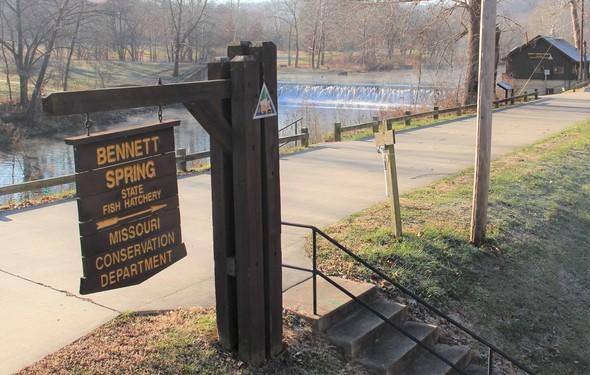 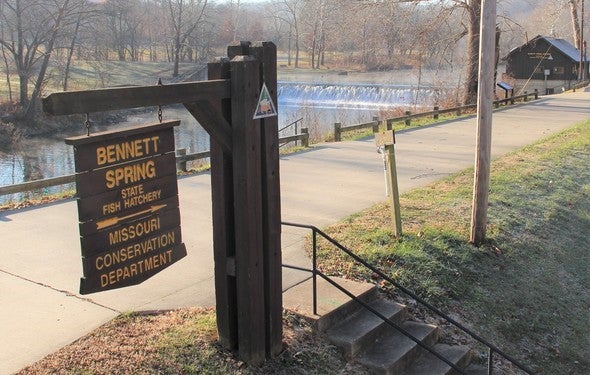 LEBANON, Mo. – Visitors to Bennett Spring State Park will soon notice the sights and sounds of heavy machinery operating within the park. This work is the first phase of a renovation project at the Missouri Department of Conservation’s (MDC) Bennett Spring Hatchery that will ensure one of Missouri’s most popular trout parks will remain a premier destination for family fishing fun.

MDC is working with HDR Engineering Inc. on a multi-year $20 million project that will repair or replace portions of the hatchery’s aging infrastructure. This project will incorporate new technologies that will improve fish production and repair or replace parts of the hatchery that either are no longer functioning or functioning poorly due to age.

Phase I of the project is underway and includes several actions at the park that are part of field investigations. Projects involved with this phase include surveying, flow monitoring, geotechnical investigations, locating utilities, and development of a groundwater test well.

What visitors to Bennett Spring will notice most during this initial phase are the sounds of machinery and periodic access restrictions to some parts of the park. MDC’s consultant will be drilling a groundwater test well at the north end of the hatchery (near Bennett Spring State Park Lodge). During drilling and well-testing activities, the park road to the campground will be restricted to one lane of traffic but will remain open to through traffic. Drilling activities have already begun and will conclude by the end of January. Well testing will follow the drilling process and is scheduled to be conducted in February.

After field investigations are complete, the consultant will begin the design during Phase II. This phase will have limited impact on the activity at the state park.

Phase III will be the construction phase. Proposed improvements for the hatchery facility are a new intake structure, reconstruction of some raceways, piping improvements, and numerous upgrades that will protect the hatchery from flood events and improve fish production capability. Upgrades will also be made to the MDC hatchery office, the shop and feed storage facilities.

The construction phase is scheduled to begin in 2023 and is estimated to take two years to complete. During construction, there may be some temporary restrictions to fishing access on parts of the stream. MDC will work with Bennett Spring State Park staff to communicate to the public the impact that construction may have on the park.

“These renovations will breathe new life into our aging hatchery, improving safety for hatchery staff along with providing enhanced security for our trout,” said MDC Bennett Spring Hatchery Manager Ben Havens. “Utilizing new technologies will enable us to raise quality fish for the public to enjoy for many years to come.”

When the construction phase begins, the hatchery will not be operating. Existing fish will be moved to MDC hatcheries at Shepherd of the Hills, Montauk and Roaring River during this period. Though the hatchery will be closed during the construction phase of the renovation project, anglers will not see any changes to existing seasons. Fish transported from other MDC hatcheries will be stocked daily during the regular season at Bennett Spring. The winter catch-and-release season will not be impacted.

“The hatchery crew is very committed to producing a quality fishing experience for all who visit Bennett Spring and we truly appreciate the support from the public as we work through these improvements to further Bennett Spring as a premier trout fishing destination,” Havens said.

Up to one million trout are raised from egg to fingerling at Bennett Spring Hatchery annually and the hatchery stocks 350,000 12 ½-inch in the stream each season. (Some of the fish raised at the hatchery are stocked elsewhere in the state.) However, the benefits of these upgrades go beyond improving fish production procedures at Bennett Spring Hatchery. To get the true significance of the infrastructure improvements, consider the more than 140,000 people who fish at Bennett Spring each year, the thousands of visitors the park gets and the economic ripple effect all this activity generates in terms of money spent on meals, lodging, gas, etc. Data from the U.S. Fish and Wildlife Service indicates that money spent on trout fishing in Missouri generates more than $187 million in economic impact each year.