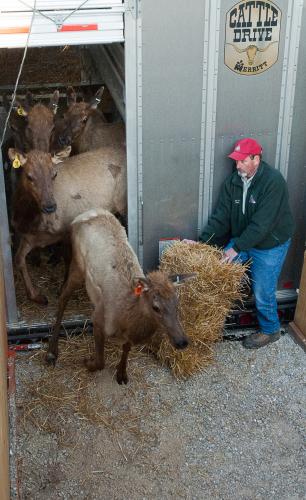 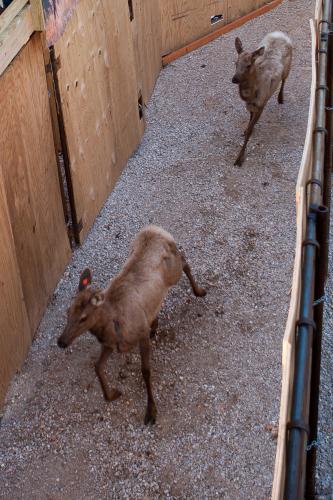 Caption
Conservation Department workers used a series of gates to sort elk into three separate pens according to their age and sex.
Credit
Cliff White
2/3
Image 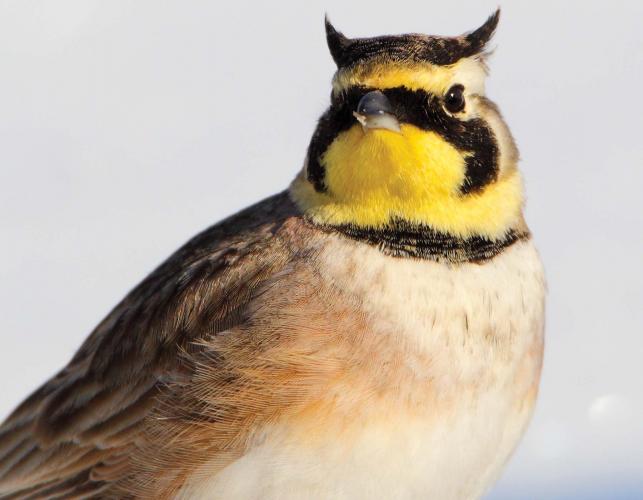 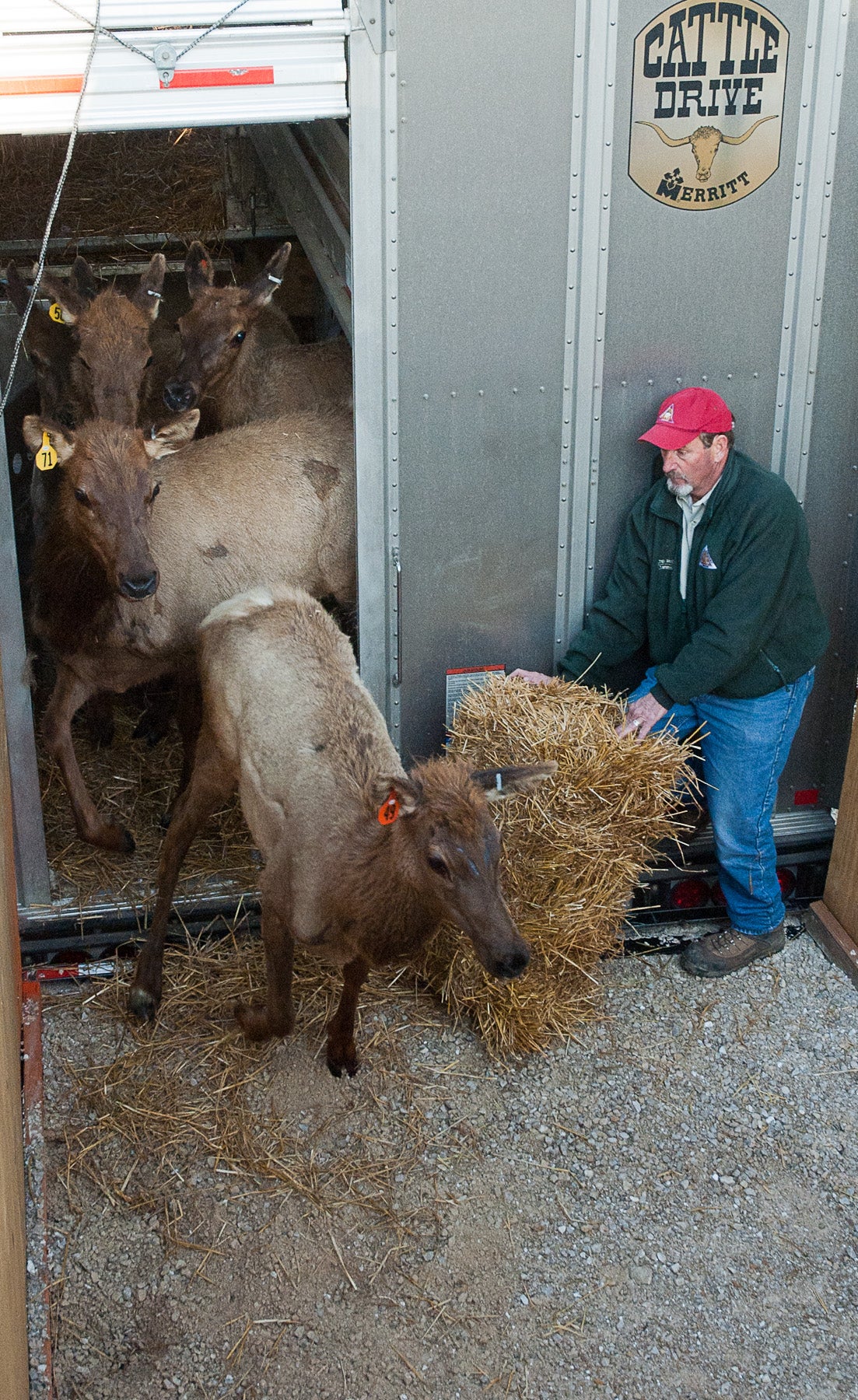 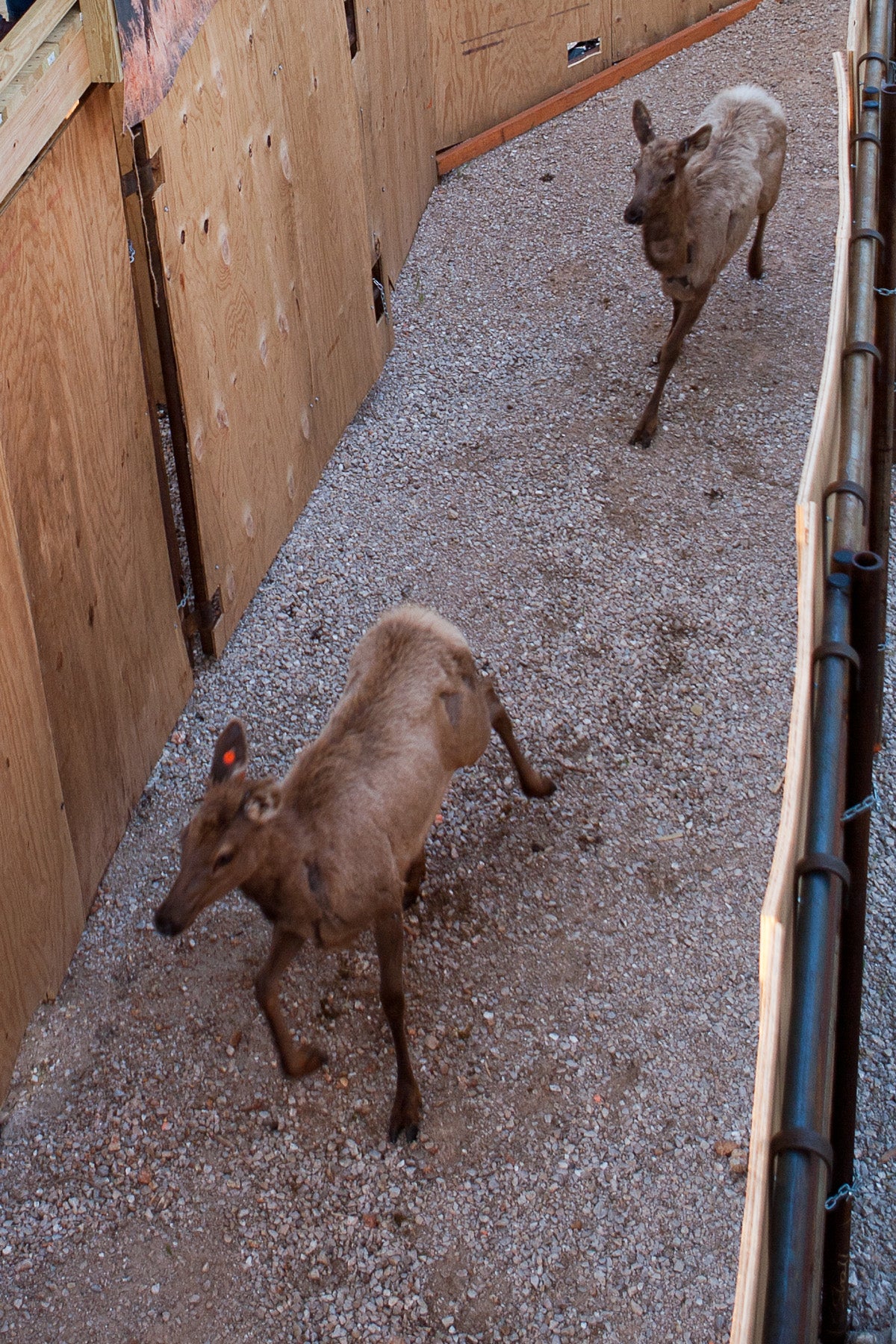 Is user submitted
Caption
Conservation Department workers used a series of gates to sort elk into three separate pens according to their age and sex.
Credit
Cliff White
Image 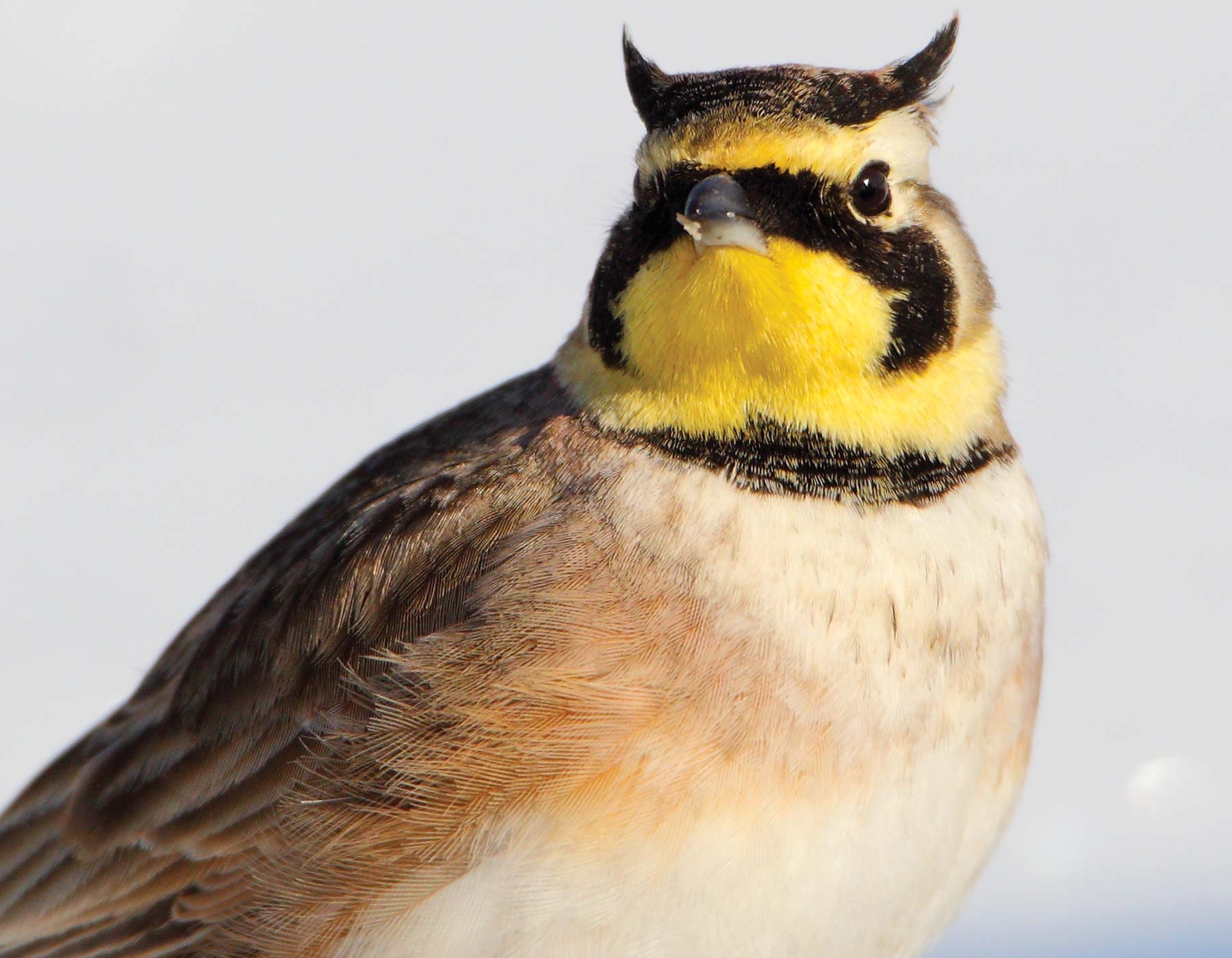 WINONA—Sometimes words simply fail. Missouri Conservation Commission Chairman Becky Plattner was struck speechless this morning as she stood in the blue dawn light atop a remote ridge in Carter County. She was listening to sharp snorts and muted barks coming from a stock trailer holding 34 elk. Overwhelmed by emotion after opening the trailer door, she turned to Conservation Commissioner Chip McGeehan and placed her hand over her heart in a gesture of awe.

McGeehan joined Conservation Department biologists wielding plywood shields as they herded the elk from the trailer and through a series of gates to sort them into holding pens. When he glanced up at Plattner, she teased “Why are your eyes so big, Chip?”

McGeehan was referring to the return of wild elk to Missouri after an absence of 150 years. The elk began their odyssey in January, when they were captured by MDC staff in cooperation with biologists from the Kentucky Department of Fish and Wildlife Resources. Three months later, with the requirements of stringent veterinary-health protocols met, the elk made a 12-hour trip by semi-trailer, arriving at Peck Ranch Conservation Area shortly after 6:30 a.m. The timing was critical to keep the animals cool and minimize stress.

Plattner and McGeehan joined officials of the Rocky Mountain Elk Foundation and MDC staff directly involved in the elk-restoration effort for the elk’s arrival. They watched as MDC staff guided six bull elk and 28 cows and calves into separate holding pens.

“Who would have thought 30 years ago that we would be standing here this morning watching elk return to Missouri?” MDC Director Bob Ziehmer mused. “This amazing event is a continuation of the Conservation legacy that Missouri Citizens created and continue to support today”

Ziehmer said the return of elk to Missouri marks a new era in the Show-Me State’s conservation history. The fact that Missouri now has appropriate habitat for elk is tangible proof that long-term, landscape-scale habitat conservation and restoration efforts are coming to fruition.

Twenty-three-thousand-acre Peck Ranch CA is at the heart of a 346-square-mile elk restoration zone that encompasses parts of Carter, Shannon and Reynolds counties. After an acclimation period the elk will be released into Peck Ranch’s rugged hills and valleys, where MDC has been working for 30 years to recreate the landscape-scale type of habitat that sustains multiple species of wildlife.

The RMEF is a major supporter of Missouri’s elk-restoration program.

“There is no higher calling in conservation than restoring a native game species to sustainable, huntable, balanced populations,” said RMEF President David Allen in a prepared statement. “We are proud to partner in that kind of effort in Missouri, just as we have been in Kentucky, Tennessee, Wisconsin and Great Smoky Mountains National Park in North Carolina. As in those places, the Rocky Mountain Elk Foundation is in this for the long haul in Missouri, too. We will remain by your side to ensure these elk not only arrive, but thrive. And we’ll be here to help you show conservationists around the world what is possible when you dream big and never give up.”

Missouri’s elk will remain in the holding pens at Peck Ranch for up to two weeks to allow them to acclimate to their new home. When the time comes to release the elk from the pens, workers will quietly open gates at night, so the animals can leave on their own when they discover they no longer are confined.

“It’s called a ‘soft release,’” said Resource Scientist Lonnie Hansen. “This is a technique recommended by our partners in Kentucky, based on their experience. They found that if they brought elk in and released them directly from trailers, the animals bolted from the area. That increased the risk of injury to the elk, and it didn’t encourage them to stay near the release site.”

For the same reason, said Hansen, MDC had a low-key arrival event at the holding facility when the elk arrived.

Peck Ranch’s refuge area will remain closed to the public through July. By then, all the calves will have been born and adjusted to their surroundings.

Hansen said MDC is counting on habitat restoration that has been underway at Peck Ranch for more than 30 years to encourage the elk to stay within the 346-square-mile elk restoration zone. He said MDC’s elk-restoration plan includes provisions to deal with elk that find their way onto land where they are not welcome. Long-term plans call for hunting as a tool to manage the size of the elk herd. When hunting commences will depend on how quickly the herd grows, but Hansen said it could begin as soon as 2015.