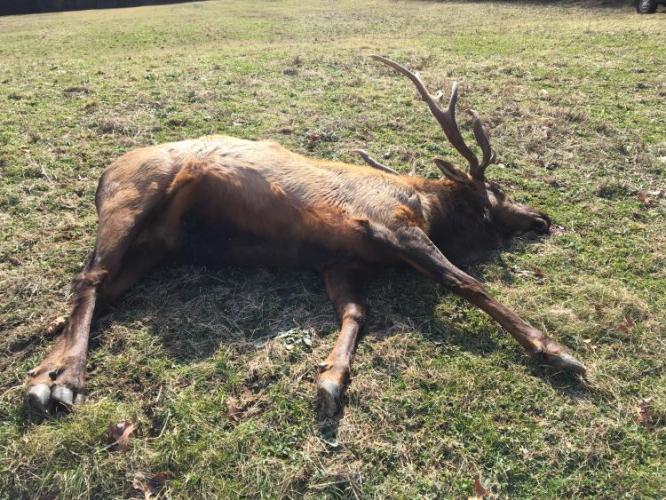 Is user submitted
Caption
This is the carcass of a 10-year-old bull elk that was shot and left near the Log Yard area of Shannon County. An adult cow elk was also shot and left in the area. MDC asks that anyone with information on this poaching case call (573) 226-3616, ext. 226, or Operation Game Thief at 1-800-392-1111.
Right to Use
News from the region
Statewide
By
Candice Davis
Published Date
03/19/2019
Body

JEFFERSON CITY, Mo. – The Missouri Department of Conservation (MDC) is still looking for leads on the two elk shot in Shannon County Feb. 8, near the Log Yard. The Conservation Federation of Missouri (CFM) and Operation Game Thief (OGT) are now offering a $8,500 reward for information leading to the conviction of the poacher/s that shot the two elk. One of the elk was a 10-year-old bull, brought to Missouri from Kentucky in 2011. The other was an adult cow, born in Missouri.

“Poaching is stealing precious wildlife resources from all Missourians. We are raising the reward amount in hopes of finding the responsible person or persons responsible for committing this selfish act,” commented Tyler Schwartze, CFM’s Executive Director.

MDC agents reported that in this poaching case, no parts of either animal were removed. As is the case with most poaching incidents, killing the elk had nothing to do with providing meat for a family. MDC’s Protection Division Chief Randy Doman said it appeared the poachers simply wanted to shoot elk for fun, or out of spite.

Doman said this case marks the fifth known elk poaching incident since the elk population was restored in 2011. Elk poachings in the state also include an adult bull in December of 2015, a two-month-old calf in August of 2018, and a bull calf this past January.

“This reward offered by CFM reflects how much all Missourians care about conservation, wildlife populations, and the laws that protect them,” Doman said. “We appreciate this strong support from CFM to help bring in additional information that could lead to a conviction.”

Anyone with information that could help with this investigation is encouraged to call the Operation Game Thief (OGT) hotline at 1-800-392-1111. The hotline is managed 24 hours a day and callers may remain anonymous. Callers should request to be considered for the reward if the information leads to conviction.