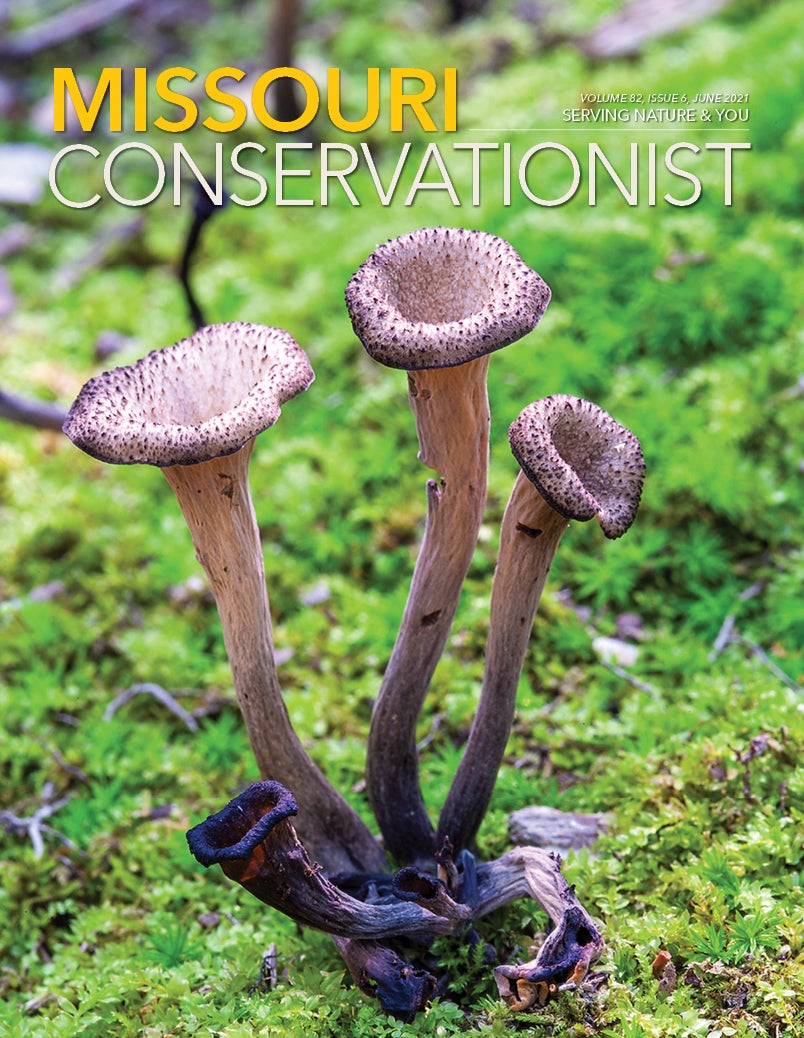 News and updates from MDC

Make a Splash This Summer

Get out on the water and bag bullfrogs, green frogs

Discover nature this summer during frogging season. Beginning June 30 at sunset through Oct. 31, those with a fishing permit or small-game hunting permit may frog for bullfrogs and green frogs.

The public can go frogging with a fishing or small-game hunting permit, but children 15 and under and residents 65 years and older are not required to have a permit.

The fun doesn’t have to end after catching frogs. Be sure to browse tasty recipes online at short.mdc.mo.gov/Zxz.

Buy Missouri hunting and fishing permits from numerous vendors around the state, online at short.mdc.mo.gov/ZKJ, or through MDC’s free mobile apps, MO Hunting and MO Fishing, available for download through Google Play or the App Store.

Thanks for Sharing the Harvest

MDC and the Conservation Federation of Missouri (CFM) thank the thousands of Missouri deer hunters who donated 238,920 pounds of venison to the state’s Share the Harvest program this past deer season, including 4,787 whole deer.

MDC and CFM also thank the participating meat processors throughout the state who grind the donated deer meat into ready-to-use packages, and the many sponsors who financially support the program.

Share the Harvest is coordinated by MDC and CFM. Since the program began in 1992, it has provided more than 4.5 million pounds — including this past season’s donations — of lean, healthy venison to help feed hungry Missourians.

For more information on Share the Harvest, visit CFM online at confedmo.org/programs/outreach/share-the-harvest.

Beginning July 1, deer hunters can apply online for a shot at more than 100 managed deer hunts throughout the state. Hunts are held from mid-September through mid-January at conservation areas, state and other parks, national wildlife refuges, and other public areas for archery, muzzleloading, and modern firearms. Some managed hunts are held specifically for youth or for people with disabilities.

The application period is July 1–31. Hunters are selected by a weighted random drawing. Draw results will be available Aug. 15 through Jan. 15. Applicants who are drawn will receive area maps and other hunt information by mail.

Details about managed hunts can also be found in the 2021 Fall Deer & Turkey Hunting Regulations and Information booklet, available starting in early July at MDC offices and nature centers, from permit vendors around the state, and online at short.mdc.mo.gov/ZZf.

Get hooked on fishing through MDC’s Free Fishing Days June 12 and 13. During Free Fishing Days, anyone may fish in the Show-Me State without a fishing permit, trout permit, or trout park daily tag. Free Fishing Days is an annual MDC event that takes place statewide during the Saturday and Sunday following the first Monday in June.

Aside from not needing permits, other fishing regulations remain in effect during Free Fishing Days, such as limits on size and number of fish an angler may keep. Special permits may still be required at some county, city, or private fishing areas. Trespass laws remain in effect on private property. Fishing permits are required before and after June 12 and 13 unless an angler is exempt by age or other factors. All other fishing regulations are also in effect.

For information on Missouri fishing regulations, fish identification, and more, get a copy of A Summary of Missouri Fishing Regulations where permits are sold, or online at short.mdc.mo.gov/Zq3.

MDC completed the monitoring, management, and testing efforts for the 2020–2021 chronic wasting disease (CWD) surveillance year. From those efforts, more than 15,300 tissue samples were collected from mostly hunter-harvested deer for CWD testing. MDC confirmed 44 new cases of CWD from the deer tested.

The new findings bring the total number of CWD cases in the state to 206. MDC has tested more than 152,300 deer since the first cases of CWD were found in free-ranging deer in Missouri in 2012.

Of the 44 new cases, two were found in Putnam County and one in Pulaski County, both of which had no previously known cases of CWD.

We thank the thousands of hunters who brought their harvested deer to our locations for CWD sampling and testing. We also thank the more than 150 partnering taxidermists and meat processors throughout the state who sampled over 9,300 hunter-harvested deer this year for CWD testing.

We also thank the more than 1,500 landowners in areas where CWD has been found who voluntarily signed up to participate in our post-deer season CWD management efforts. Cooperatively, landowners and our staff in these areas harvested an additional 2,713 deer after the close of the deer season, removing an additional 18 CWD-positive deer.

Does the summer heat have you longing to get out that canoe or kayak? If so, keep a few things in mind. If taking a cooler, it must be affixed to your vessel and have a lid that seals. Floating vessels, like canoes and kayaks, are apt to tip, so this state statute is designed to keep our waterways clean and debris free. Also, a trash bag that closes must be secured to your vessel. All trash should be collected and disposed of in a proper receptacle at the end of your float. Leave our waterways better than how you found them! For more information, visit short.mdc.mo.gov/Zcn.

This foil packed dish really packs in the flavor. Whether you are gathered around the campfire or need a quick idea at home, this dish is sure to please. Chanterelle mushrooms are one of the most popular mushrooms in the world, and Missouri is home to four different species. Look for them in oak-hickory forests — especially after periods of extended rain.

Clean chanterelles and tear into bite-sized pieces, leaving the very small ones whole. Sauté in butter with salt and pepper to taste for 4 to 5 minutes, or until liquid has evaporated. Cut four 12-by-12-inch squares of aluminum foil. Spread olive oil lightly on each piece and place a slice or two of polenta on foil. Top with chanterelles and rosemary sprig. Fold up foil. Bake over hot coals for about 10 minutes or a bit longer if you prefer the polenta edges crunchy (if at home, oven bake at 425 degrees F). 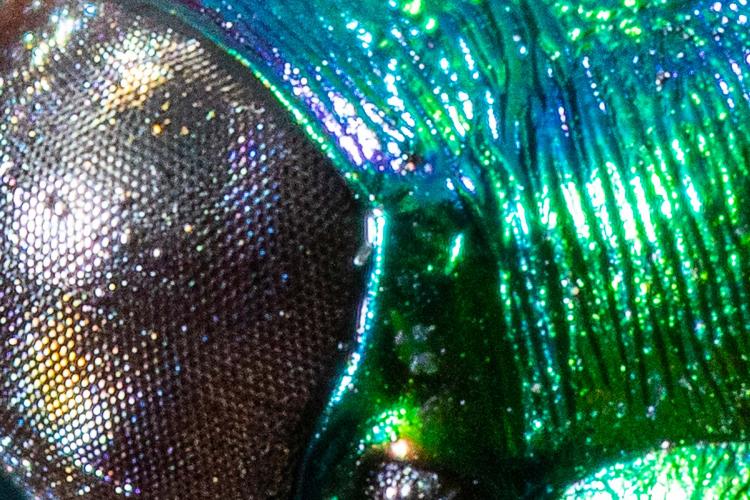 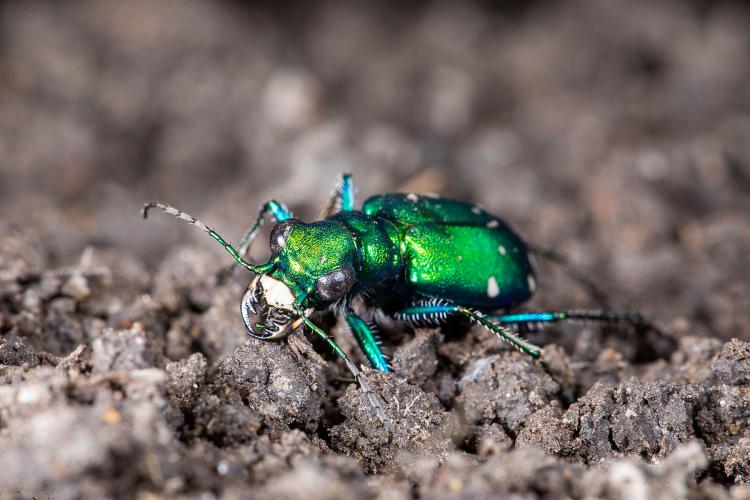 The six-spotted tiger beetle is probably the most familiar tiger beetle in Missouri. It’s most often seen in spring, as it darts in and out of trails just ahead of hikers. Its shiny green color makes it easy to spot, but its fast-running, fast-flying behavior also make it distinctive. This beetle, a subtribe of tiger beetles called “flashy tiger beetles,” has six legs and strong pincers at the mouth.