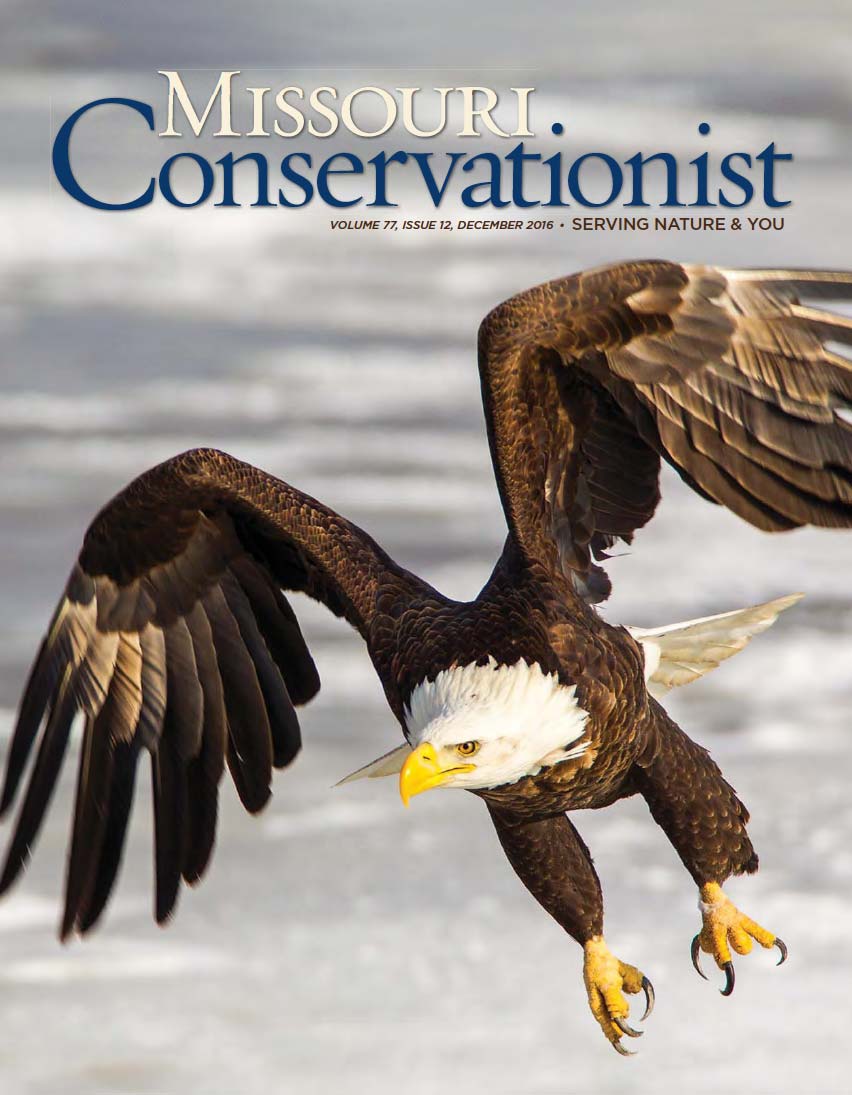 Who you calling bald? With its unmistakable white head and tail, the adult bald eagle is readily identified by the casual observer and avid birdwatcher alike. In fact, the bald eagle got its name from an old English word “balde,” which means “white-headed,” not “hairless.” The scientific name, Haliaaetus leucocephalus, more accurately describes the bald eagle — the sea eagle with the white head.

The sight of the majestic bald eagle in flight never fails to me with awe. This magnificent bird has been a symbol of strength, courage, and spirituality since ancient times, and in 1782 a committee of the Continental Congress selected the bald eagle as our nation’s symbol. At that time, there were an estimated 100,000 nesting pairs in the United States.

Sadly, by 1890, bald eagles were nearly eliminated as nesters in Missouri, and by 1963 the bald eagle population was reduced to only 487 nesting pairs nationwide. Habitat loss and degradation, illegal shooting, and pesticide poisoning, particularly by DDT, were to blame. This chemical persists in prey animals like fish, the primary food of bald eagles, and it caused eagles and other birds to produce thin-shelled eggs that decreased hatching success. In 1972, the federal government banned the use of DDT, and in 1978 the U.S. Fish and Wildlife Service (USFWS) listed the bald eagle as endangered under the Endangered Species Act.

Bringing Eagles Back From the Brink

From 1981 to 1990, the Missouri Department of Conservation, in cooperation with USFWS and the Dickerson Park Zoo in Springfield, released 74 young bald eagles in Missouri to reestablish them as nesters. The eaglets were obtained from captive breeding facilities or healthy wild populations and released in good nesting habitat at Mingo National Wildlife Refuge and Schell-Osage Conservation Area.

Retired State Ornithologist Brad Jacobs helped with those early reestablishment efforts. His job was to ensure young eaglets survived and fl edged without becoming dependent on humans. “Eagles that imprint on humans can’t survive in the wild,” he says. “Twice a day, I would climb up a 24-foot ladder carrying several large, frozen trout.”

The ladder led up a tower to an artificial nest — a wooden cage — with the young eagles inside. “I would slip the fish through a small door that allowed me to feed them without them seeing me,” Jacobs said. “When the eagles were old enough to fledge, around 10 to 12 weeks, we lowered the front gate during the day, allowing them to walk out onto dry branches attached to the tower. At some point, after a week or so, they would let go of the branches and take to the air. Some landed in the pond below and rowed ashore, others landed in a brushy thicket, and some began to rise into the sky. I would carry the wet and crash-landed birds back up into the tower and put them in the cage overnight until they achieved a successful first flight.”

Thanks, in part, to many on-the-ground (and up-a-ladder) efforts like Jacobs’ across the United States, the bald eagle started to recover nationally by the mid 1980s.

As a result, the USFWS removed the bald eagle from the endangered species list on June 28, 2007. However, the bald eagle remains protected under the Migratory Bird Treaty and the Bald and Golden Eagle Protection acts, and it continues to be a species of conservation concern in Missouri.

To monitor bald eagles’ progress in the lower 48 states, the Department participates in the USFWS’ post-delisting monitoring plan, which calls for states nationwide to conduct on-the-ground and aerial surveys every five years for 20 years. The Department participated in the pilot study in 2006 to test the plan’s effectiveness before delisting, and Resource Science Division staff have conducted two more surveys since then, one in 2011 and one earlier this year.

Conducting the surveys every five years takes a lot of preparation and help from both staff and citizen volunteers. For the ground portion of the survey, staff are given a statewide map and spreadsheet listing over 500 total nests in the state. Staff make observations from mid-March through early July, a period of time that covers incubation through fledging. For each nest they see, staff record the date, location, and status, which indicates if the nest is active, inactive, or destroyed. Staff report details they see, such as an adult on the nest, an adult perched in the nest tree, nest not found, nest empty, and so on. This information is very important in determining the current status of individual nests and assessing the state’s nesting bald eagle population overall.

Monitoring volunteer Marsha Jones is the conservation agent for Adair County. A note from her 2016 report illustrates some of the surprises staff encounter during ground surveys. “I needed to acquire the GPS coordinates for one of the four nests on the Chariton River, so I parked my truck and walked out under the tree where the nest is located. I didn’t see anything at first, and then one of the eagles swooped over my head, reminding me not to get too close!”

Whether surveying from the ground or up in the air, we make every effort to minimize disturbance to the eagles. With this in mind, we conduct aerial surveys between mid-March and early April when the leaves are just starting to bud. This timing makes nests much easier to see.

I enjoy surveying nests from a helicopter, which gives me a bird’s-eye view of the scene. Hovering only about 200 feet above the ground, I can easily look directly into the nest and count the number of eggs or eaglets, or tell what’s on the menu for today. Oftentimes, the adults look suspiciously at our mechanical bird without budging. Other times, they fly off to a nearby tree or circle us, immediately returning to the nest when we leave.

Although we conduct statewide ground and aerial surveys every five years, I ask staff for assistance in updating bald eagle records each year. Oft en, the fate of many of these nests is unknown, and therefore annual reporting updates from staff and the public are essential. I welcome and encourage reports from the public of all active nests in the state.

Citizen volunteers enjoy monitoring local eagle nests and look forward to it every year. Volunteer Harold John describes his family’s first sighting of an active nest near Weaubleau Creek. “When my brother emailed me that there was a nesting pair of bald eagles on our farm, I was very skeptical. We are located almost 10 miles away from the nearest large body of water, Lake Pomme de Terre. But we confirmed that the bald eagles had taken over a red-shouldered hawk’s nest and soon started construction of a larger nest. They have since returned to nest for the last five years and have fledged a total of 11 eaglets.”

The Natural Heritage data are sensitive, and many species are targeted by illegal wildlife collectors, especially in the pet trade. Therefore, data are shared only through special arrangement, allowing project managers to obtain a tailored and confidential environmental review for project planning purposes. Despite the bald eagle’s remarkable recovery, it still faces threats. Each year, eagles die or become wounded from intentional shooting, lead poisoning, collision with vehicles and power lines, and other hazards. And degradation of habitat continues to be a key threat to eagles’ survival.

Back from the brink of extinction, the bald eagle’s recovery is one of the great conservation success stories in the United States. Our coordinated monitoring efforts help ensure that the bald eagle stays strong in the Show-Me State so future generations can look up and feel the awe of this magnificent bird’s beauty.

Phoenix was one of the 74 eaglets released at Schell-Osage Conservation Area. Unfortunately, she was unable to survive in the wild. She was taken to the rehabilitation center at the Dickerson Park Zoo, where staff completely rehabilitated her. Phoenix has remained at the zoo since 1989, and she continues to serve as a reminder of the bald eagle’s turbulent history and current success in Missouri.

Catch an Eagle Days Event Near You

What You Can Do to Protect Bald Eagles 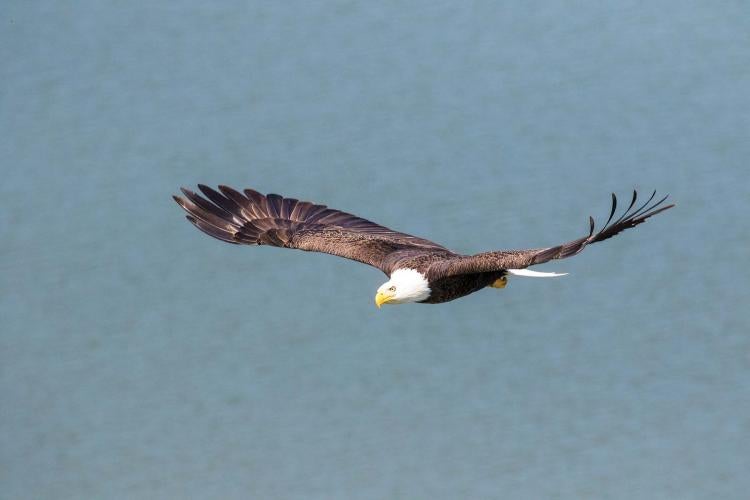 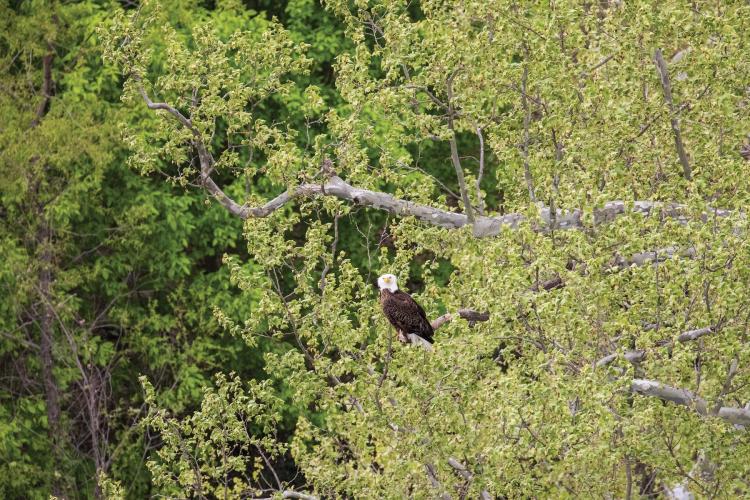 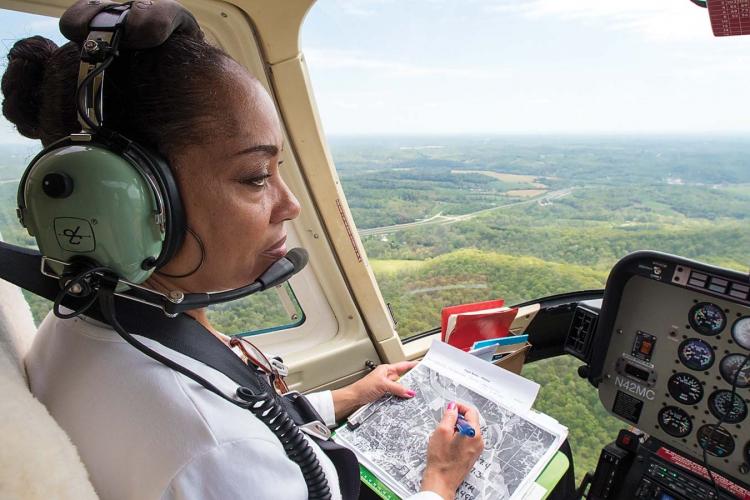 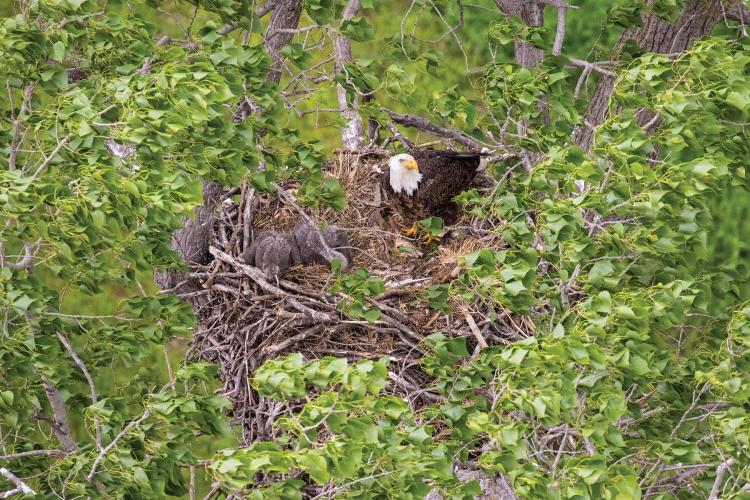 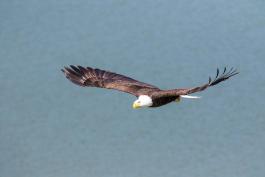 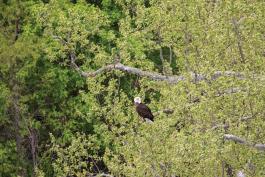 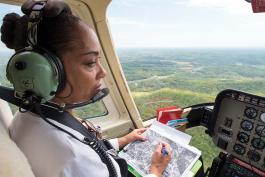 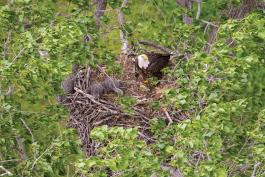