Carolina moonseed is a rather slender, twining vine with stems 16 feet long or more. It is scattered in southern and eastern Missouri. It bears clusters of bright red, somewhat flattened fruits. The disk-shaped seeds are spiraled like a snail shell.

Flowers July–August, in loose clusters 1–6 inches long; flowers minute, yellowish green; petals 6, white; stamens 6, not extending beyond the petals; male and female flowers are found in separate clusters on the same plant, but in some cases the flowers may contain both sexes.

Catbrier (Smilax bona-nox) is a woody vine that has leaves with a rather similar shape, but its stems have tendrils as well as prickles; also, its leaves are more leathery.

Moonseeds may also be confused with our various species of wild grapes (Vitis spp.). Because wild grapes are edible and moonseeds are toxic if eaten, it is important to be able to distinguish between them. Key characters for identifying grapes are their toothed leaves, the curling tendrils by which they climb, and their seeds, which are not disk-shaped or bowl-shaped.

Height: in Missouri, typically rises to about 10–12 feet. In the southern United States, it grows larger because it does not experience freezes.

Scattered in southern and eastern Missouri, in the Mississippi lowlands of the Bootheel, along the Missouri and Mississippi rivers, and in the Ozarks and Ozark border.

Native woody vine with interesting leaves and fruits. Despite their beauty, the fruits are toxic and not edible to humans.

The attractive, brilliant red fruits and interesting leaves add to Carolina moonseed’s ornamental value. It can be used as an unusual native vine on a trellis, arbor, or fence, or allow it to grow into shrubs in a hedgerow. In hard winters in Missouri, it may die back partially or to the ground. This vine is often available from native plant nurseries. Farther south where freezes do not occur, this vine is vigorous, spreads aggressively, and reaches larger sizes.

If eaten, the bitter red fruits are toxic to people and other mammals. If you have small children or pets, this might not be a good plant to cultivate in an area where they may eat them.

The genus name, Cocculus, is an old name and a diminutive of coccus (“a berry”); the species name, carolinus, is for Carolina, where the plant was first described; it is uncertain if the reference is for North or South Carolina or both. The common name, moonseed, refers to the seed’s resemblance to a three-quarters moon. The common name snailseed refers to the seed’s resemblance to a spiraled snail shell.

The fruits are consumed by several species of birds, but apparently it is not a favorite food source. Alkaloid chemicals make them taste bitter. The bitterness may diminish as the season wears on. The fruits are not edible to humans.

This vine is a component of thickets, and thickets are tremendously valuable to wildlife. Many small mammals, songbirds, and other animals find shelter and nesting space in these tangled jumbles of stems and leaves. Among the many kinds of plants that form thickets are those with seeds and fruits that feed these animals. A diverse array of insects feed on the plants, and their bodies become food for birds and their hungry nestlings. 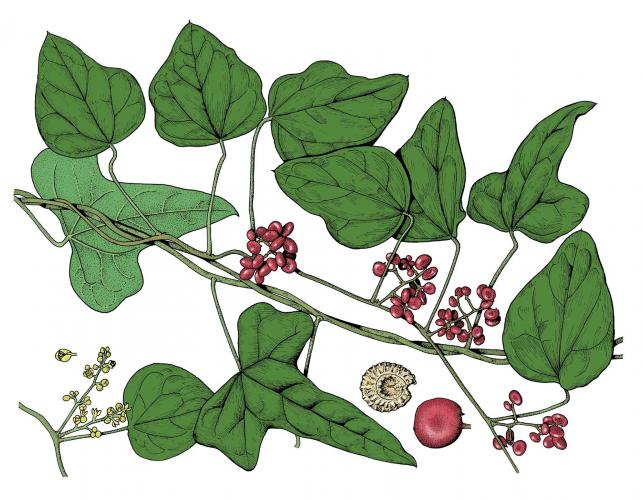 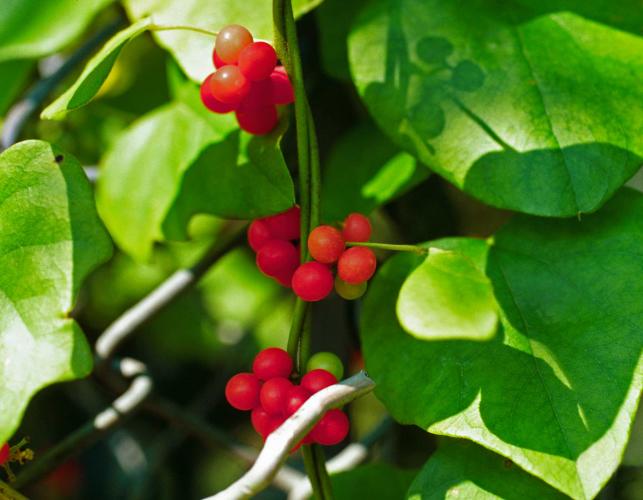 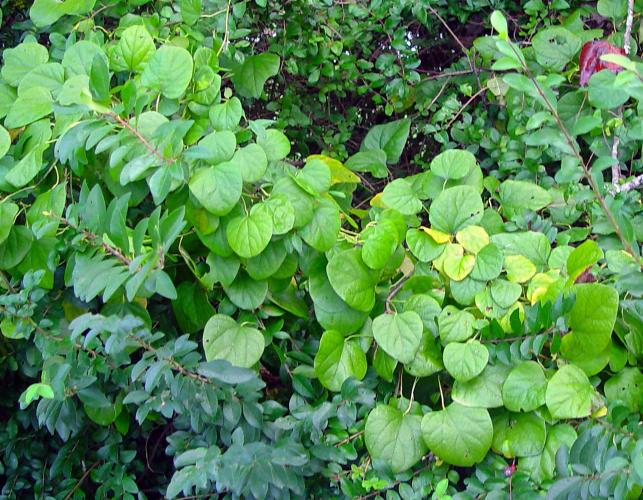 Caption
Carolina moonseed has slender stems and climbs by twining around shrubs and trees. It lacks tendrils.
Credit
Chris Evans, University of Illinois, Bugwood.org
Right to Use
3/4
Image 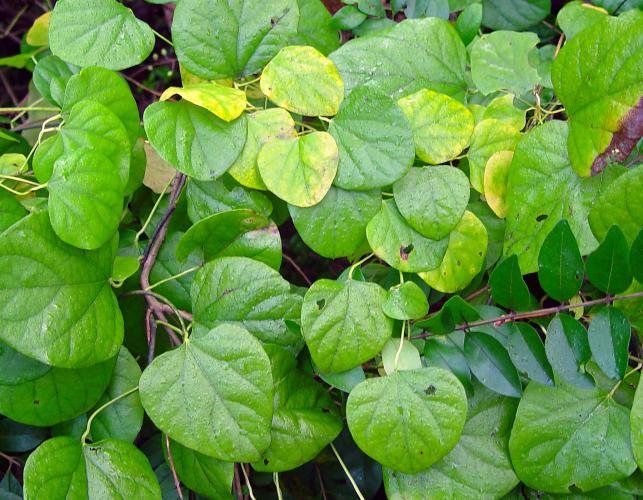 Caption
The leaves of Carolina moonseed are variable in shape: triangular or oval, lacking lobes or having 3 or 5 shallow lobes, lobe tips usually rounded or only bluntly pointed. There are 5 main veins from the base.
Credit
Chris Evans, University of Illinois, Bugwood.org
Right to Use
4/4
Image 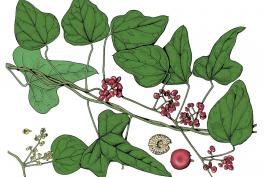 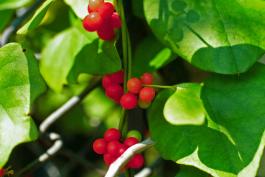 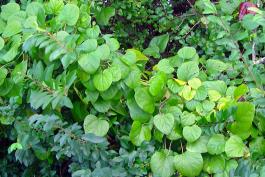 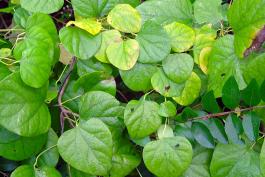 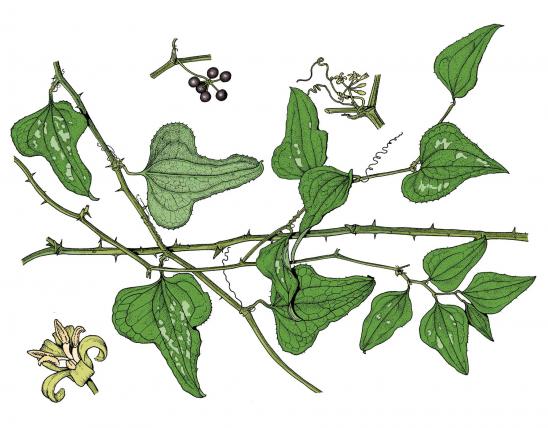 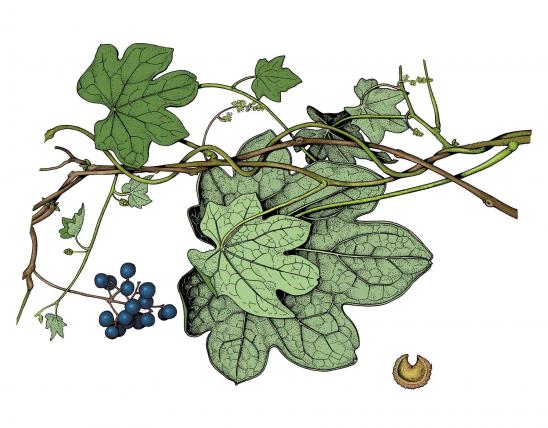 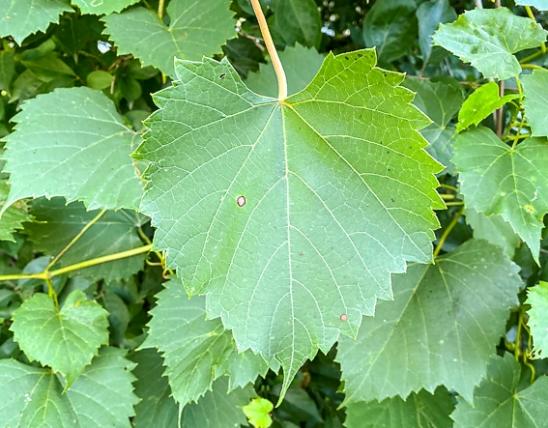 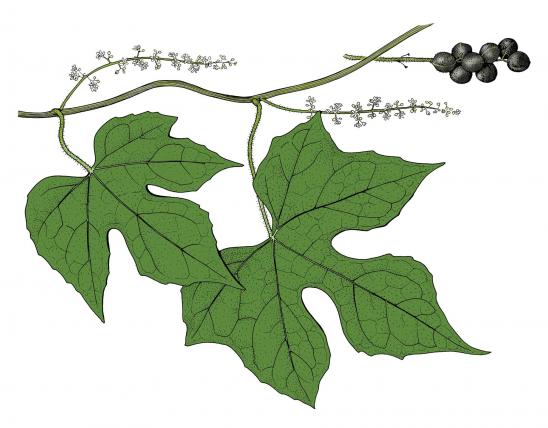 Cupseed
About Trees, Shrubs and Woody Vines in Missouri
There are no sharp dividing lines between trees, shrubs, and woody vines, or even between woody and nonwoody plants. “Wood” is a type of tissue made of cellulose and lignin that many plants develop as they mature — whether they are “woody” or not. Trees are woody plants over 13 feet tall with a single trunk. Shrubs are less than 13 feet tall, with multiple stems. Vines require support or else sprawl over the ground.