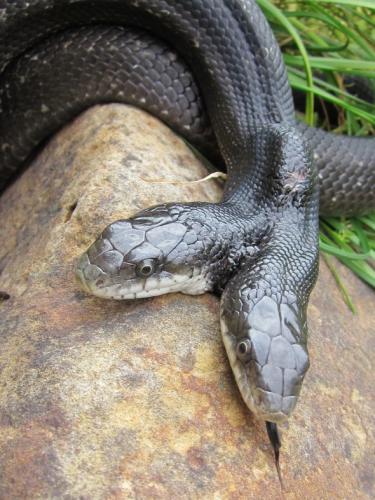 CAPE GIRARDEAU, Mo. -- It’s quite the accomplishment for a female black rat snake with four eyes, two tongues, and two brains to survive over a decade – and you can visit her in all her uniquely-conjoined reptile glory every Tuesday through Saturday at Missouri Department of Conservation’s (MDC) Cape Nature Center.

MDC naturalist Alex Holmes said conjoined twinning occurs roughly one in every 100,000 black rat snake births. In the wild, those that survive probably wouldn’t be able to escape predators due to their body’s lack of dominate leadership, he said.

“It’s very unlikely that these sisters would have survived in the wild as they seem to get confused with which direction to go,” Holmes said.

The roughly 15-year-old snake was originally found in Delta in 2005.

During feeding times, the two heads will fight over their once-a-week frozen mice meal provided by Cape Nature Center staff, he said, and the routine consists of covering one head with a small cup as the other head feeds. She can consume 10 tiny thawed mice in one sitting.

“We feed both heads even though they share a digestive tract because we believe it is good to stimulate them both,” Holmes said.

A rat snake her size would be able to eat adult mice with no problem, he said. But the snake is only fed tiny frozen mice due to a deformity in the snake’s conjoined spine which restricts the size of prey it can swallow.

Cape Nature Center visitors can catch a glimpse of the snake devouring her weekly meal of frozen mice the second Thursday of each month during “Feeding Frenzy." The next virtual Feeding Frenzy event will be Oct. 8 at 1 p.m.

Registration is encouraged and can be completed online at https://mdc-event-web.s3licensing.com/Event/EventDetails/174546.

More information about this and other upcoming activities at MDC’s Cape Girardeau Nature Center can also be obtained by calling 573-290-5218. Staff at MDC facilities across the state are holding virtual programs. A listing of these programs can be found at mdc.mo.gov/regions.