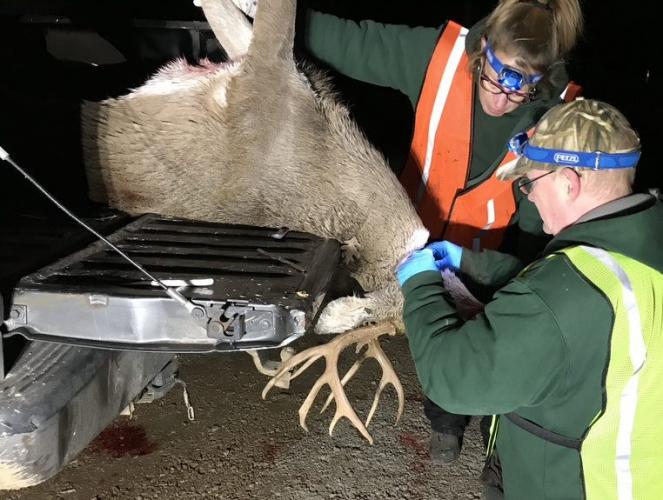 Caption
Pictured, MDC staff collect lymph nodes from a harvested buck for CWD testing during MDC’s mandatory sampling effort during the opening weekend of the fall firearms deer season. MDC has found 28 new cases of CWD from 11 counties and is now focusing on reducing the spread of the disease from those areas.
Credit
MDC
Right to Use
1/1
Image 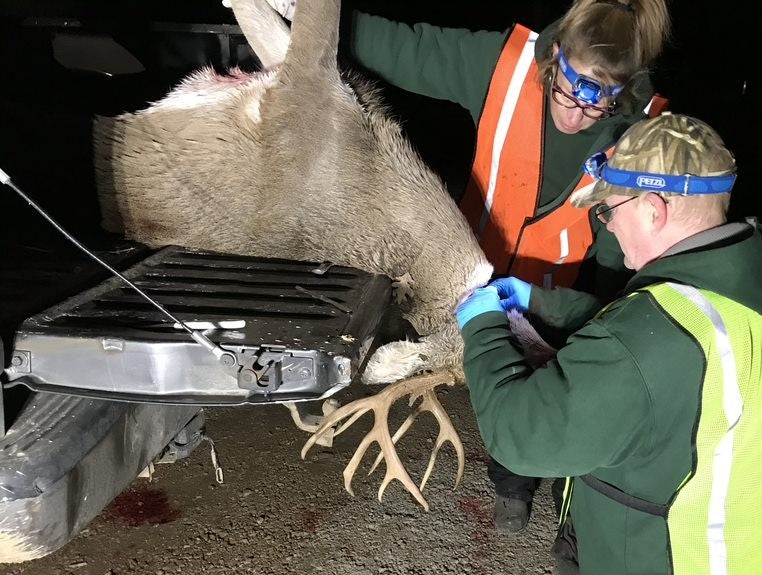 Is user submitted
Caption
Pictured, MDC staff collect lymph nodes from a harvested buck for CWD testing during MDC’s mandatory sampling effort during the opening weekend of the fall firearms deer season. MDC has found 28 new cases of CWD from 11 counties and is now focusing on reducing the spread of the disease from those areas.
Credit
MDC
Right to Use
News from the region
Statewide
By
Joe Jerek
Published Date
01/17/2019
Body

JEFFERSON CITY, Mo. – The Missouri Department of Conservation (MDC) reports 28 more deer from 11 Missouri counties have been found to have chronic wasting disease (CWD). This brings the number of cases of the deadly deer disease in Missouri to 103 since 2012.

CWD is a deadly illness in white-tailed deer and other members of the deer family, called cervids. CWD is spread from deer to deer through direct contact and through contact with soil, food, and water that have been contaminated through feces, urine, saliva, or carcasses of infected deer. CWD kills all deer and other cervids it infects. Learn more at mdc.mo.gov/cwd.

Batten added that CWD was detected in four new areas of the state this season:

“In the new areas, the number of CWD positives is low, indicating the disease was likely recently introduced in those locations,” explained Batten. “Overall, where CWD occurs throughout the state, the number of infected deer also remains low, which indicates that CWD is relatively rare in the state – and we want to keep it that way. If left unchecked, CWD could dramatically decrease the overall health and number of deer in Missouri over time.”

MDC has tested nearly 130,000 deer for CWD since it began its efforts in 2001. For the most current CWD numbers and more information, visit the MDC website at mdc.mo.gov/cwd under “CWD in Missouri.”

MDC is now focusing on managing CWD in the immediate areas where new and recent cases of the disease have been found. MDC staff are again working with landowners on a voluntary basis through mid-March in the immediate areas (approximately 1-2 square miles) around where recent cases of CWD have been found to harvest and test additional deer for the disease.

“Post-season targeted culling is a proven method of slowing the growth of CWD in a local deer population and, as a result, minimizing the accumulation of CWD in the local environment,” said Batten.

She added that MDC is modeling this management approach after similar effective efforts in Illinois.

“Illinois is showing success in stabilizing CWD prevalence through targeted culling and reports a steady 1% prevalence statewide over time,” Batten said. “In contrast, since stopping its targeted-culling management efforts in 2007, the state of Wisconsin continues to see a steady increase in CWD prevalence. Some local areas of southwest Wisconsin are seeing over 50% of adult bucks with the disease.”

MDC staff and participating landowners have taken a total of about 4,600 deer through targeted culling since the Department began the effort several years ago. Post-season targeted culling accounts for just approximately 4% of all CWD samples MDC has collected so far but has resulted in finding almost half of all CWD cases in Missouri.