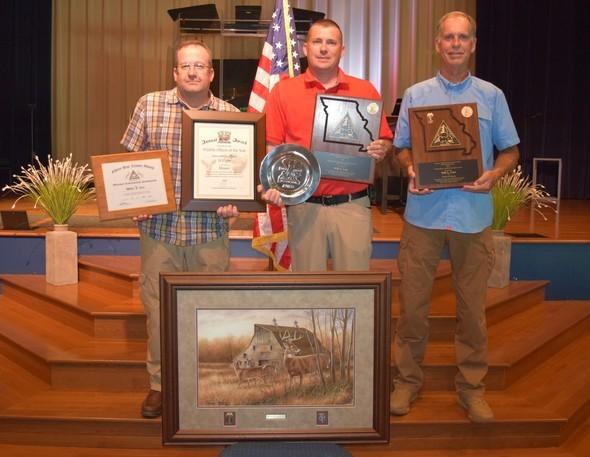 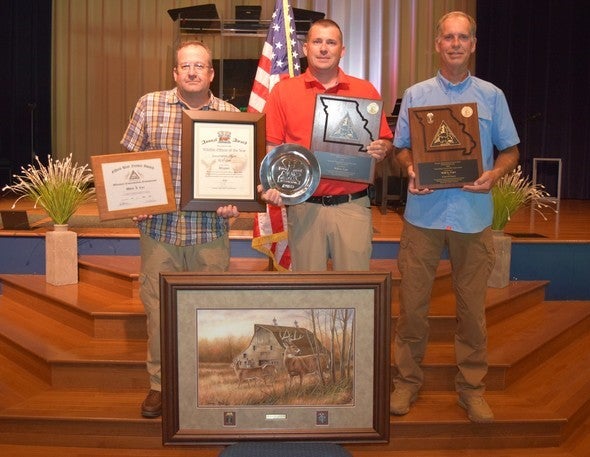 Is user submitted
Caption
Jasper Co. Agent Will Carr (center) received the MDC Southwest Regional Outstanding Agent of the Year, the Missouri Outstanding Agent of the Year, and the Shikar-Safari Club International Wildlife Officer of the Year. Also pictured are Capt. Jason Dickey (left), who supervises agents in MDC's Southwest Region, and Lt. Scott Burger (right).
Right to Use
News from the region
Southwest
By
Francis Skalicky
Published Date
09/25/2020
Body

JOPLIN, Mo. – Enforcing Missouri’s fish and game laws and serving the public in a multitude of conservation-oriented ways has earned Missouri Department of Conservation (MDC) agent Cpl. Will Carr recognition on regional, state, and national levels.

Carr, who is one of two conservation agents in Jasper County, has been named MDC’s Southwest Regional Outstanding Agent of the Year for 2020, MDC's Missouri Outstanding Agent of the Year, and has also received the Shikar-Safari Club International Wildlife Officer of the Year. All three awards, which were presented to Carr in September, honor outstanding achievements in the areas of the enforcement of fish and game laws coupled with work in the areas of conservation education and community relations that are far and above the officer’s normal job requirements.

For Carr, 2020 involved a flurry of enforcement activity in the five counties that comprise MDC’s Joplin Protection District (Jasper, McDonald, Newton, Barton, Lawrence) and he also assisted with cases in other counties. Among the larger cases he was involved with were multi-state investigations on timber theft, commercial fishing, and hunting violations. Other cases Carr was able to obtain convictions for included fishing by illegal methods, over-the-limit fishing violations, fishing without a permit, hunting without a permit, hunter trespass, and tagging violations. Carr also coordinated seven group patrols and participated n 15 other group patrols.

On top of all this, Carr, a resident of Carthage, still finds time to coach youth baseball and basketball teams, be a member of the Trinity Lutheran-Freistatt School Board, and to be active in his church.

“Corporal Will Carr is an excellent example of what it takes to be a successful conservation agent,” said Capt. Jason Dickey, who supervises conservation agents in MDC’s Southwest Region. “His dedication and professionalism in serving the citizens of Missouri and Jasper County to promote conservation, along with his efforts to make those resources safer for all of us, is vital to ensuring that people understand the value of our fish, forest, and wildlife resources.”

Carr grew up in Mount Vernon and is a graduate of Missouri Southern State University. He has been with MDC since he graduated from the Conservation Agents’ Academy in 2005..