Alley Spring, the natural area’s namesake, is the seventh largest spring in Missouri. The spring conduit is known to extend at least 3000 feet underground and reaches at least 155 feet below the surface. Rainfall and runoff entering sinkholes around the town of Summersville, 15 miles to the northwest, has been determined to enter the labyrinth of cave passageways formed in dissolved dolomite ( a type of limestone) under the Missouri Ozarks and exit at Alley Spring. Just outside of the natural area is Alley Spring gristmill that was built in 1894. Despite the historic use of the spring to power a mill, Alley Spring has retained its biological integrity. The cool waters issuing forth from Alley Spring flow through a spring branch for a half-mile before entering the Jacks Fork River. Here in the spring branch cool water (58 degrees Fahrenheit) provides habitat for colorful Ozark fishes including the southern redbelly dace, the Ozark sculpin, and the bleeding shiner.

On the dry rocky ridges of this natural area are some of the highest quality old-growth stands of white oak and shortleaf pine woodland known in the Ozarks. These stands were spared the heavy, indiscriminate timber cutting of the Ozarks that occurred from 1880-1920. Looking up at the sentinel pines found on the ridges one can get a glimpse of what the six million acres of shortleaf pine woodlands that were in Missouri in 1860 looked like. Today only about 600,000 acres of shortleaf pine remain in the state. At one time the nation’s largest sawmill was at Grandin, Missouri, where lumber production peaked at the beginning of the 20th century. In 1910 the mill was moved to West Eminence, just 4 miles from here, but by 1920 the woods were cut over and the mill was sold.

Also protected is Branson Cave, one of the most biologically diverse caves known in Missouri. The natural area conserves five species of conservation concern dependent on spring and cave natural communities. A wide spectrum of Ozark natural communities typical of the Current River Hills region can be explored from springs and associated mesic upland forests to cherty dry woodlands and dolomite glades. Visitors can see plants such as wild hydrangea and walking fern near the spring and then ascend the hill to see shortleaf pine and low bush blueberry on dry cherty slopes. Birds to look for in the woods include ovenbird, summer tanager, red-eyed vireo, and black-and-white warbler. As you walk the trails keep in mind that deep below you cave passageways support at least seven cave-adapted animals or “troglobites” including the grotto salamander, a species of conservation concern. 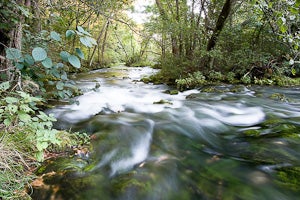