I Released a Lunker Award 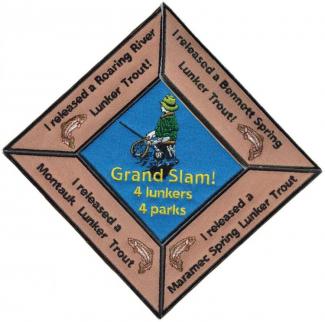 Catching and releasing big trout takes skill and dedication. That's why the Conservation Department's "I Released a Lunker" program recognizes anglers who release big trout to fight another day.

Here's how to earn a patch:

Why be satisfied with releasing lunkers at just one of Missouri's trout parks? Catch and release a lunker at all four parks and win the Grand Slam patch. Arrange the four individual patches around the colorful Grand Slam patch, and show the world you're serious about fishing Missouri's trout parks and releasing lunker trout for other anglers to enjoy.