When it comes to protecting our incredible diversity of plants, animals, and the habitats they require, how do conservation organizations decide which landscapes to focus on? And how many different kinds of natural communities are there, anyway? How do you define and identify them? Our system of Terrestrial Natural Communities is an incredibly valuable tool for answering these questions and more.

Since 1985, Missouri has had a solid framework for understanding our many terrestrial (land) natural communities. This system, sometimes called the “Nelson” system after its author, Paul W. Nelson, is an indispensable tool for anyone wanting to identify habitats, evaluate habitat quality, and make decisions about conservation and natural resources.

We all know that the distribution of plants and animals isn’t absolutely uniform across the state. Shortleaf pines grow naturally in the eastern Ozarks but are not common elsewhere, dickcissels are usually found in open country and not in the woods, and so on. The terrestrial natural communities system makes sense of all this variation.

Like other biogeography systems, it is based on several factors that influence the distribution patterns of species: geology, soil types, water flow patterns, topography, slope, current and historic vegetation patterns, historic impacts of humans on the land, and more.

The system describes nine major terrestrial natural community types, many of which form patchworks with each other, with one type grading into its neighbors.

1. Forest. Forest is defined as a large area (usually more than 10 acres) dominated by trees that form a closed canopy, with multiple layers of shade-tolerant subcanopy trees, shrubs, vines, ferns, and herbs. The tallest trees usually have narrow crowns and few limbs, as they compete for light. The ground flora is dominated by wildflowers that come out in spring and then go dormant the rest of the year; the only other ground flora is shade-tolerant ferns, grasses, and sedges.

2. Woodland. Woodland, by definition, is a wooded area where the tree canopy ranges from 30 to 100 percent closure. The understory of smaller trees or shrubs is mostly absent, giving woodlands an open look. Also, the ground flora is dense with grasses, wildflowers, and sedges. The canopy trees have large, spreading crowns, especially in more open, dry areas. Woodlands, like savannas, prairies, and glades, were historically kept open by periodic disturbances, especially fire, which didn’t kill the largest trees, kept the woody understory from forming, and invigorated the growth of grasses and other ground plants.

3. Savanna. A savanna is a grassland interspersed with open-grown scattered trees, groupings of trees of various ages, and sun-loving shrubs. Savannas look like widely spaced, orchardlike groves, and they often occur alongside large prairies, forming an intermediate habitat between prairie and woodland. Tree cover is less than 30 percent. Like woodlands, prairies, and glades, savannas are adapted to frequent, low to moderate-intensity fires, which clear out most woody species but do not destroy the largest trees. Grasses and wildflowers benefit from the periodic fires. Only fragmented examples of former savannas exist today.

4. Prairie. Prairies are natural communities dominated by perennial grasses and forbs with scattered shrubs and very few trees (less than 10 percent tree cover). Grasses are the dominant plants, some growing more than 6 feet tall, and most prairie species have very deep root systems — nearly two-thirds of a prairie’s biomass is underground. A high-quality prairie 100 acres in size typically supports more than 200 native plant species, with up to 20 species growing with a single square yard. Like woodlands, savannas, and glades, prairies require periodic fire, or they will gradually become increasingly wooded, eventually becoming closed forest. As European settlers moved westward across the continent, nearly all of America’s native prairies were destroyed: plowed up and turned into crop fields.

5. Glade. A glad is an open, rocky, barren area dominated by drought-adapted wildflowers, warm-season grasses, and unique, specialized animals. Most glades are essentially treeless openings within otherwise wooded landscapes. Most glades have rocky outcrops of bedrock and shallow soils. Lichens and mosses are common, and many drought-tolerant, desert-like plants — wildflowers, grasses, sedges, and shrubs — occur in the driest glades. Rock types have a big influence on the character of a glade, with igneous, sandstone, and chert glades having fairly acidic soils, while limestone and dolomite glades support plants requiring alkaline or neutral soils. Glade animals include the greater roadrunner, eastern collared lizard, Missouri tarantula, striped bark scorpion, and others that are reminiscent of the desert Southwest. Like woodlands, savannas, and prairies, glades require periodic fire to maintain their unique character. Without it, woody species (especially eastern red cedar) take over, and the glade and its sun-loving plants and animals disappear.

6. Cliff and talus. These are two related types of natural communities. Cliffs are steep to vertical exposures of bedrock or loess (soils derived of fine, wind-blown glacial materials). Cliffs are usually defined as being more than 10 feet high; in Missouri, they can extend upward more than 500 feet. Cliffs are associated with escarpments, high-gradient streams, broad river floodplains, or karst features such as sinkholes and chasms caused by collapsed caves. Vegetation is sparse — trees, shrubs, vines, ferns, perennial wildflowers, lichens, liverworts, and mosses. Trees on cliffs are usually stunted and gnarled, but they can be impressively old. Cliffs have three main sections: the cliff edge at the top, a pediment or base at the bottom, and the steep “cliff face” in between.

Talus, or talus slope communities, occur where loose rock fragments and slabs accumulate — at the bottoms of cliff faces, or the breakdown of bedrock or rock outcrops on steep rocky slopes. Talus, by definition, is where coarse rocky debris covers more than 50 percent of the surface. Vegetation ranges from patchy and barren to dense and tree covered. Most talus communities occur in the southern, unglaciated half of the state, and along rivers and major streams.

7. Stream edge. These natural communities occur along and within streams and rivers where frequent flooding deposits sediment or erodes substrates. They are related to, but distinct from other bottomland and riverfront natural communities. What makes them unique is the direct, strong impact of floodwater; the substrates are recently deposited mud, silt, sand, gravel, boulders, logs, and detritus (so there is no well-defined soil profile); and they are linear in nature, occurring as open gaps along waterways in otherwise wooded surroundings. Stream edge communities include sandbars, gravel washes, and streambanks and riverbanks.

8. Wetland. Wetlands are natural communities where the soils are saturated by surface water or groundwater. Water levels often fluctuate seasonally between flooding over the ground and just saturating the soil. With such wet, low-oxygenated soils, hydrophytic (water-loving, or aquatic) plants dominate the flora. Soil types and water chemistry vary, and so do the sources of the water: marshes and swamps associated with rivers; wetlands associated with sinkhole ponds; fens, seeps and other forms of groundwater seepage, and springs and spring branches. Wetlands contain a large, diverse variety of plants and animals, and they are tremendously productive in terms of biomass. They are crucial for preventing flooding, they increase water quality by filtering pollutants and silt from runoff, and they are home to many migratory and rare species.

9. Cave. A cave is a natural opening in the earth’s surface that’s large enough that a person exploring in it can go beyond the reach of daylight. Unlike other terrestrial natural communities, caves have no, or very little plant life. Instead, the dominant organisms are animals, notably the distinctive animals adapted to life in complete darkness. Because of the karst geology that forms nearly all of them, Missouri’s caves are intimately connected to groundwater and the soils through which the groundwater filters. The two main types of cave natural communities, aquatic and terrestrial, differ by the amount of water in the cave. Aquatic caves have a permanent flow and appreciable flow and/or pools, while terrestrial caves’ flow in and out of the entrance is less than permanent, or the cave is essentially dry.

How This Classification Helps Missourians

In the late 1970s, a multiagency group called the Missouri Natural Areas Committee determined a need for a classification system for Missouri habitats. Having such a system, they reasoned, would help evaluate and preserve our native landscapes, especially those that could be protected as designated Natural Areas.

Paul W. Nelson, at that time employed by the Department of Natural Resources (DNR), and his task force created a technical paper that later grew into the first edition of The Terrestrial Natural Communities of Missouri, a 197-page book published in 1985. In 2010, a revised, enlarged edition of the book came out; like its predecessor, it’s an incredibly valuable tool for land management, assessments of plants, animals, and habitats, and conservation planning.

The DNR, MDC, The Nature Conservancy, and federal agencies use the “Nelson” system to inventory and evaluate their progress in protecting natural habitats. The system is a tool that helps those entrusted with managing our natural resources to meet their goals.

Long ago, people concerned with conservation focused on individual plant and animal species that were declining or threatened with extinction or extirpation. Today, we understand that conservation must focus on the distinct habitats those species require.

It’s pretty simple: Save the habitat, and you’ll save a host of species. For example: The greater prairie-chicken is threatened with extinction. It requires large, unbroken areas of native prairie to survive, so to conserve the prairie-chicken, we must focus on its habitat, notably the unglaciated prairies of western Missouri, south of the Missouri River. When we protect our few remaining unglaciated prairies, we also protect other species of conservation concern: Mead’s milkweed, Barbara’s buttons (a member of the aster family that looks a little like cornflowers), northern crawfish frogs, Great Plains and southern prairie skinks, blacknose and Topeka shiners, Henslow’s sparrows, regal fritillaries, prairie mole crickets, and more.

The Missouri Natural Areas System seeks to protect Missouri’s best remaining examples of its diverse native habitats. The system has grown from 129 areas with 18,453 acres (in 1985) to 180 natural areas with more than 70,758 acres (as of early 2010).

It helps to keep in mind that a “tool” can be something besides a metal or wooden object you can hold in your hand; it can be a conceptual framework, a system of ideas, a series of definitions, that help us think clearly and work efficiently toward our goals.

The information on this page comes from the 2010 edition of Paul W. Nelson, The Terrestrial Natural Communities of Missouri, published by the Missouri Natural Areas Committee, Missouri Department of Natural Resources, Jefferson City. It is a 550-page, full-color reference book that carefully describes the 85 distinct natural communities of plants and animals in our state. It also provides a great introduction to Missouri’s physical and biological geography, the history of human interactions with Missouri’s environment, and current conservation challenges and opportunities.

Paul Nelson and the Missouri Natural Areas Committee deserve deep gratitude from all Missourians for contributing such a useful and concise framework for understanding our state’s natural history. 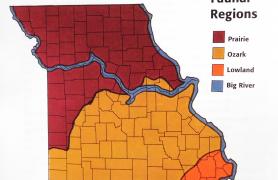