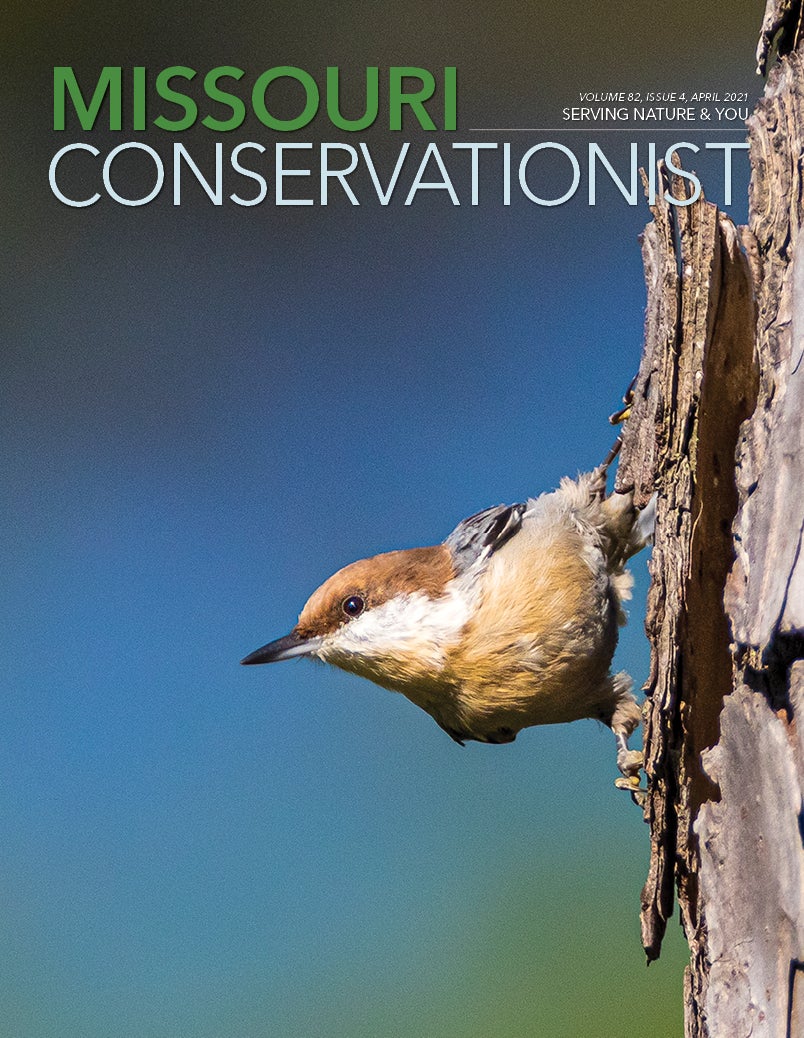 Just sending five elk hunters afield in the Missouri Ozarks in October and December was historic, but for each of them to harvest an elk may have been more than expected.

“In terms of our inaugural elk hunting season, we really couldn’t have asked for it to go any better,” said Cervid Biologist Aaron Hildreth.

Even after the archery portion of the season in October came and went without an elk being harvested, Hildreth said he was optimistic for the prospects during December’s firearms season.

“Although the firearms portion of elk season occurs well after the peak of the rut, it is not uncommon to hear bulls bugle that late in the year,” he said. “If the hunters were able to put in their time, I was confident that there were going to be some great opportunities to harvest bulls.”

On the opening day of the firearms season, Dec. 12, Joe Benthall, Mount Vernon, took the first elk of Missouri’s inaugural elk season — a 5x5 bull elk — on National Park Service property near Log Yard in Shannon County. Seven days later, one day before the end of the season, landowner Bill Clark took the fifth and final elk of the season — a spike bull elk — on his 80-acre property east of Peck Ranch Conservation Area (CA) near Van Buren in Carter County.

In addition to a place in Missouri’s conservation history books and elk meat for the freezer, participants in the hunt also came back with lessons learned to pass along to future Missouri elk hunters.

The field of elk hunting permit recipients — four drawn from the general population of Missouri applicants and one drawn from a smaller pool of qualifying property owners within the Landowner Elk Hunting Zone, which was made up of a portion of Carter, Reynolds, and Shannon counties — were closely divided between first-time and experienced elk hunters.

As a first-time elk hunter, Gene Guilkey, 60, of Liberty, quickly dove into the online elk hunting community to learn as much as he could.

“Never having elk hunted, I started from scratch,” Guilkey said. “Trying to get online and elk hunting videos — I don’t know how many different videos I watched — researching on the internet, the web, just, you know, elk, what they do, how they travel, things like that.”

The area authorized for elk hunting — parts of Carter, Reynolds, and Shannon counties — may seem small when compared to the statewide boundaries for more familiar deer and turkey seasons; however, the area’s hilly terrain and dense forests make it formidable to anyone unfamiliar with the lay of the land.

“I just recommend people who’ve taken interest in putting in for the draw — that want to increase their understanding of the area and how it lays and where the animals are — they need to take a few trips here during the year and not wait until the season,” said Clark, a 40-year Carter County resident who has been active in elk habitat improvement from the start of the restoration effort.

“I started going down six to seven weeks before the archery season,” Schultz said. “I started around the Peck Ranch area and just started expanding out around, just looking for sign for a starting point. It’s really just like it would be for deer hunting a new farm or something. I did the same thing down there.”

While the internet was helpful, nothing could take the place of person-to-person contact with the people who best know the area and the animals, Guilkey said.

“We talked to a lot of local people, including MDC staff, and I found some fields online,” Guilkey said. “I talked to a county sheriff and said, ‘Hey, you guys are out on the road a lot in these counties, where do you see them?’”

Clark suggested that in addition to visiting the area, take time to talk to residents.

“I’m just saying, travel here during the year to learn the terrain, the lay of the land, and go to the coffee shops,” he said. “Talk to some of the loggers. All the loggers around here know where everything is.”

Even with the guidance of those who work and live in the area, Guilkey said he also relied on higher tech as well.

“I’ve never done any electronic scouting — my son had, but I had never — but I bought an app, and we did a lot of scouting electronically, where you could see the area, because that area is so dense and so hilly,” he said. “You may be on the road on the side of the hill and there may be a field 100 yards away from you, but you can’t see it.”

Good scouting and planning increase odds of a successful hunt, but even with proper preparation, circumstances may require a mid-hunt adjustment to be successful. Elk that Schultz had scouted near Peck Ranch CA left the area by the time he returned for the hunt.

“Actually, on day one, I had to find a whole new spot to start.”

And despite both being cervids (members of the deer family), white-tailed deer and elk require different approaches in some hunting situations and similar approaches in others.

Even those who have hunted elk out west will have to adapt their approach when hunting Missouri elk, said Schultz.

“I think that my suggestion would be, if they hunted out west, forget all that,” he said. “And I would hunt them, and I would search for them like you would deer. It doesn’t mean hunt out of a tree stand. You don’t hang up a tree stand, but look at patterns they’re using as far as ridges, where the acorns are — because you know, they feed on those just like deer do — so I think if you can find good acorn crops early, you can find them.”

The thickness of the Ozark forests also leads to a difference between Missouri elk hunting and hunting elk in western states. Without as many wide-open spaces, locating elk over long distances just isn’t possible here.

“It was harder in the sense of finding them,” he said. “You can’t just get up on the side of a hill, at the top, and glass for a mile to see if they’re on the other side, because you’re basically in solid woods. So, you have to do a lot of searching for them. Definitely traveling through the hills, finding out what ridges they may be using or not using is helpful.”

Listen to Your Wife

The techniques used by Missouri’s inaugural class of elk hunters are universal for experienced hunters, but Schultz and Clark both drew upon a resource that some hunters don’t have, and others refuse to use: they listened to their wives.

Both Schultz’s wife, Loralee, and Clark’s wife, Dorothy, directly contributed to their harvests, the men said.

“We were hunting a certain area down there at Log Yard and we came back in the evening,” Schultz said. “My wife, she was down there with us. She was at the cabin already, and we got to talking. She said that she had heard one bugle that night just before dark around the cabin where we were staying.”

The following day, after hunting a different site, Schultz returned to the cabin before sunset and tried his luck at a food plot nearer the cabin. With his son, Jimmy, Schultz watched as several elk entered the food plot, including the bull elk he would eventually harvest.

“He finally gave me a good opportunity where I could put a shot on him,” he said. “It was about 60 yards away.”

For Clark, the season appeared as if it might slip away without getting his elk. Limited by the landowner permit to his own property, he had watched the herd well enough over the years to know it didn’t venture through his land often in December. With every other permit already filled, Clark, 79, was resigned to the fact that it might not happen, and it might not have, had it not been for Dorothy.

“We were sitting at the breakfast table, and she walked over to the window and saw the cow elk down there. A herd of about 30 or 40 cows, more or less,” he said. “I was just looking for horns because I knew that’s what my permit was for, and there was one spike there — just one of them, one bull — and, so, I shot him.”

Adventure of a Lifetime

Five hunters, five harvests. The list of those who have hunted and harvested elk in Missouri during modern times is short, but it will grow. While it remains an exclusive club, what these new Missouri elk hunters share with every other Missouri hunter — from squirrel and rabbit hunters, to quail and pheasant, to waterfowl, deer, and turkey — is the joy of being in nature and the thrill of the hunt.

“It was really enjoyable,” said Guilkey. “I mean, I’m still on Cloud Nine. When people ask me to talk about the hunt, it was — just for me — the adventure of a lifetime.”

On the heels of the highly successful inaugural elk hunt in Missouri in 2020, MDC staff are preparing for the follow-up season. The Resident Antlered Elk Application, which enters participants into the random drawing for permits for the 2021 elk season, will open May 1 and run through May 31. The application fee remains $10, and those selected will be able to purchase a permit for $50. Updated information on the application process is available online at short.mdc.mo.gov/Zat.

The number of permits to be issued for the 2021 elk season will be determined based on herd size, health, and bull-cow ratio as determined by aerial surveys, fall cow-calf counts, survival rates, and reproduction data, said Cervid Biologist Aaron Hildreth. The Missouri Conservation Commission was expected to vote on the elk season date and permit quota recommendation at its March 26 meeting, which was held after the deadline for this issue of Missouri Conservationist.

Aside from possible changes in the number of permits issued, the 2021 season will also see a loosening of the restrictions on where qualifying landowners with an elk permit can hunt and who qualifies for the landowner allocation of elk hunting permits, Hildreth said.

”Local landowners have been supportive of the reintroduction of elk to the area and many have worked hard to create habitat that benefits elk and many other wildlife species,” he said.

“Given that all elk permit holders will be able to hunt throughout the three counties, we wanted to make the 10-year sit-out period uniform across all permit holders,” said Hildreth. 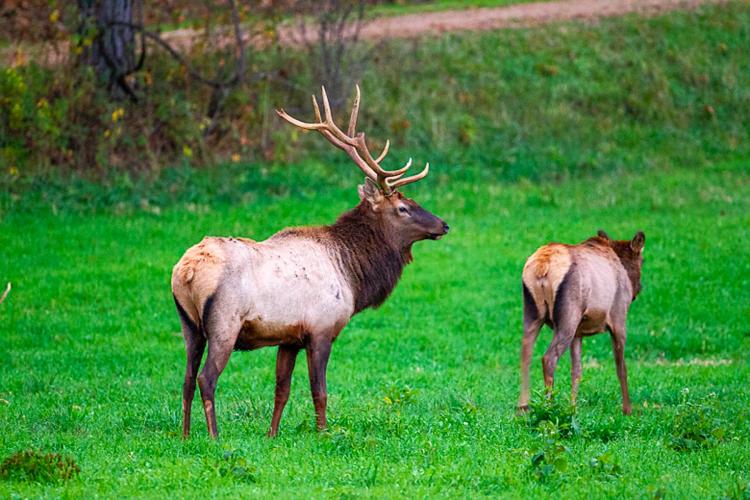 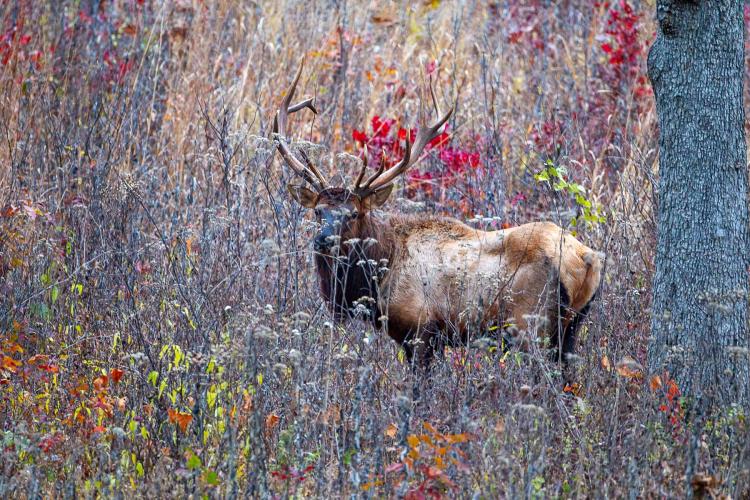 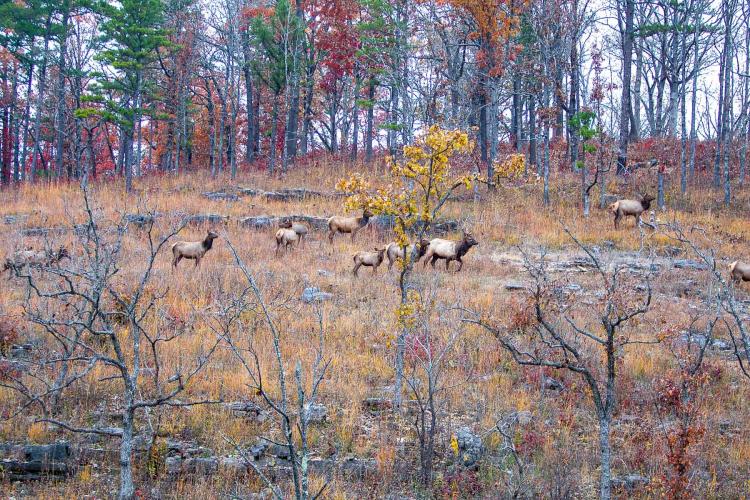 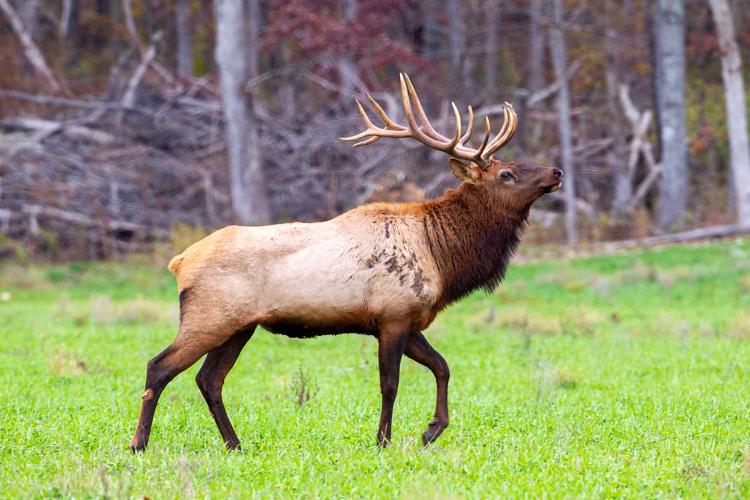 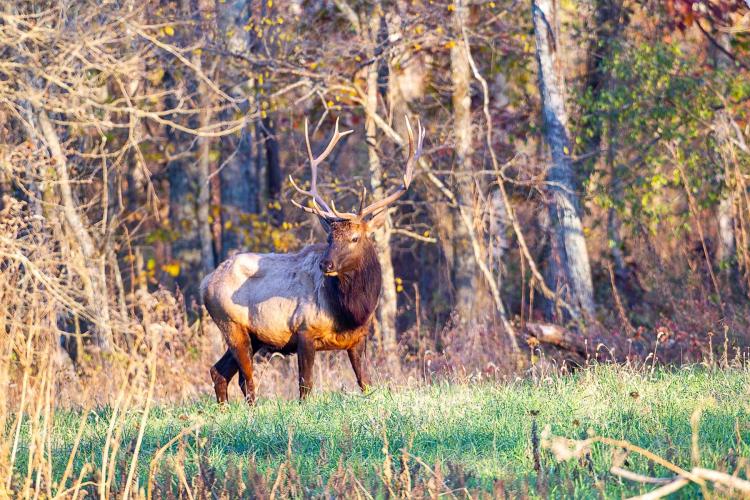 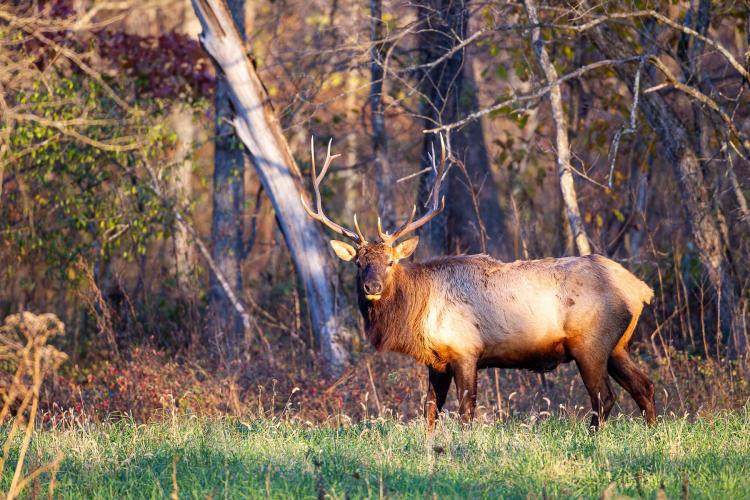 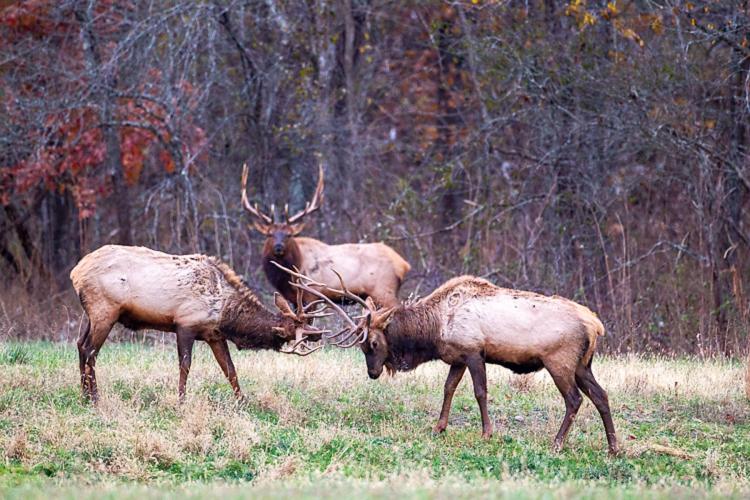 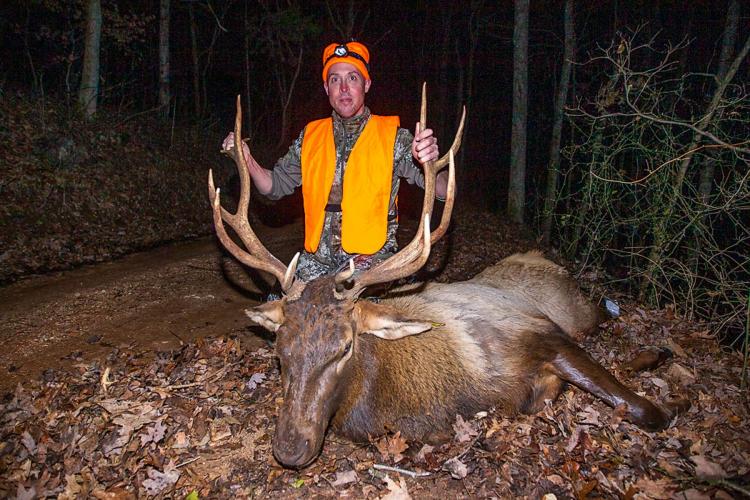 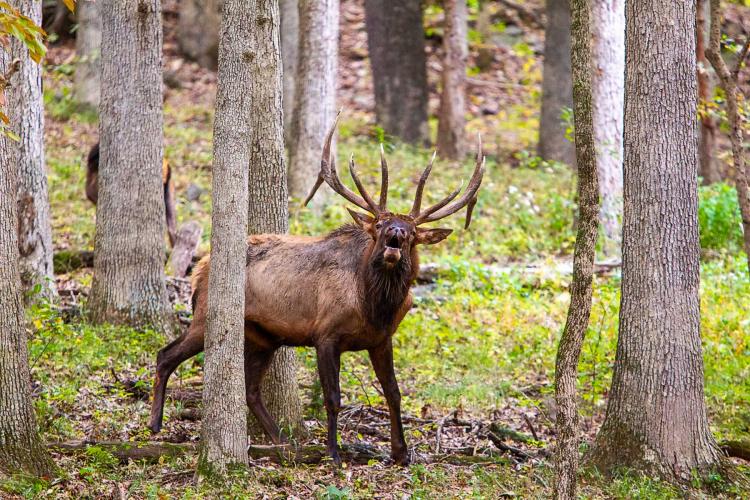 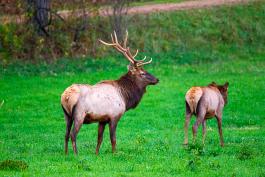 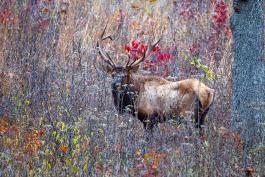 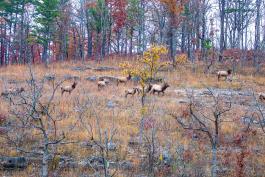 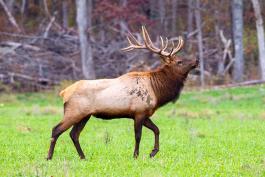 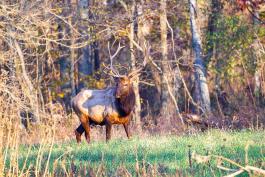 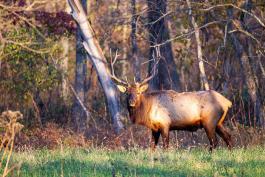 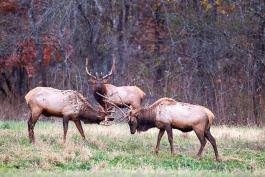 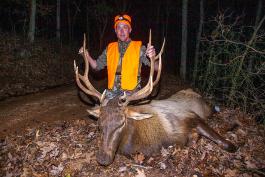 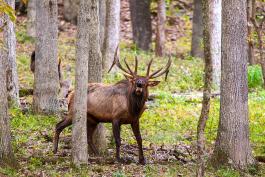 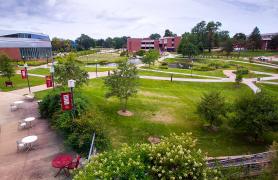 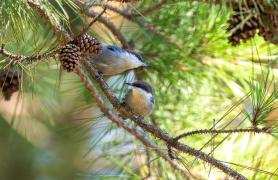 The Squeak is Back
THIS CONTENT IS ARCHIVED
Body