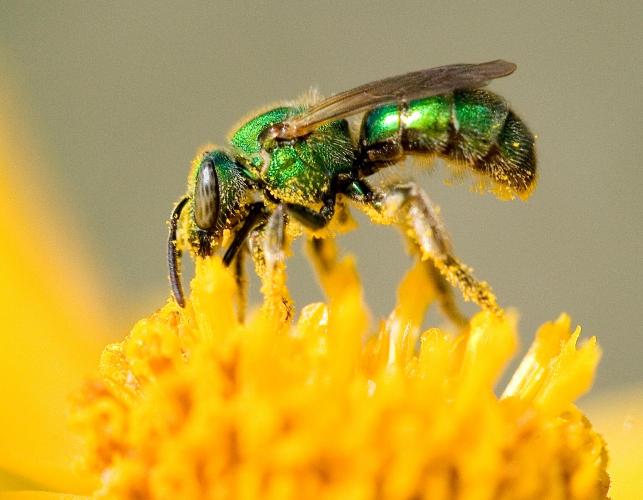 Caption
The green sweat bee (pictured) is one of around 450 species of native bees in Missouri. Native bees are important pollinators of many popular food crops. MDC urges the public to help bee pollinators by planting native flowers.
Credit
Anonymous
Right to Use
1/2
Image 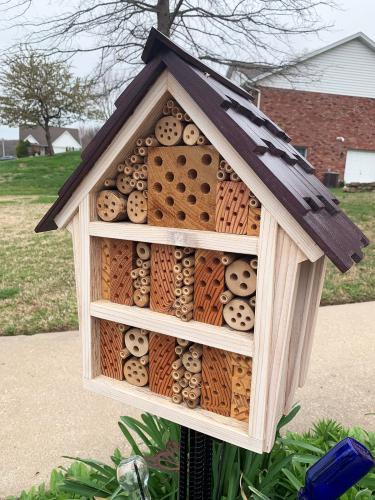 Caption
A bee house is a great way to support habitat for solitary bees. Missourians can construct their own bee house by using scrap wood with covered nesting and resting holes.
Right to Use
2/2
Image 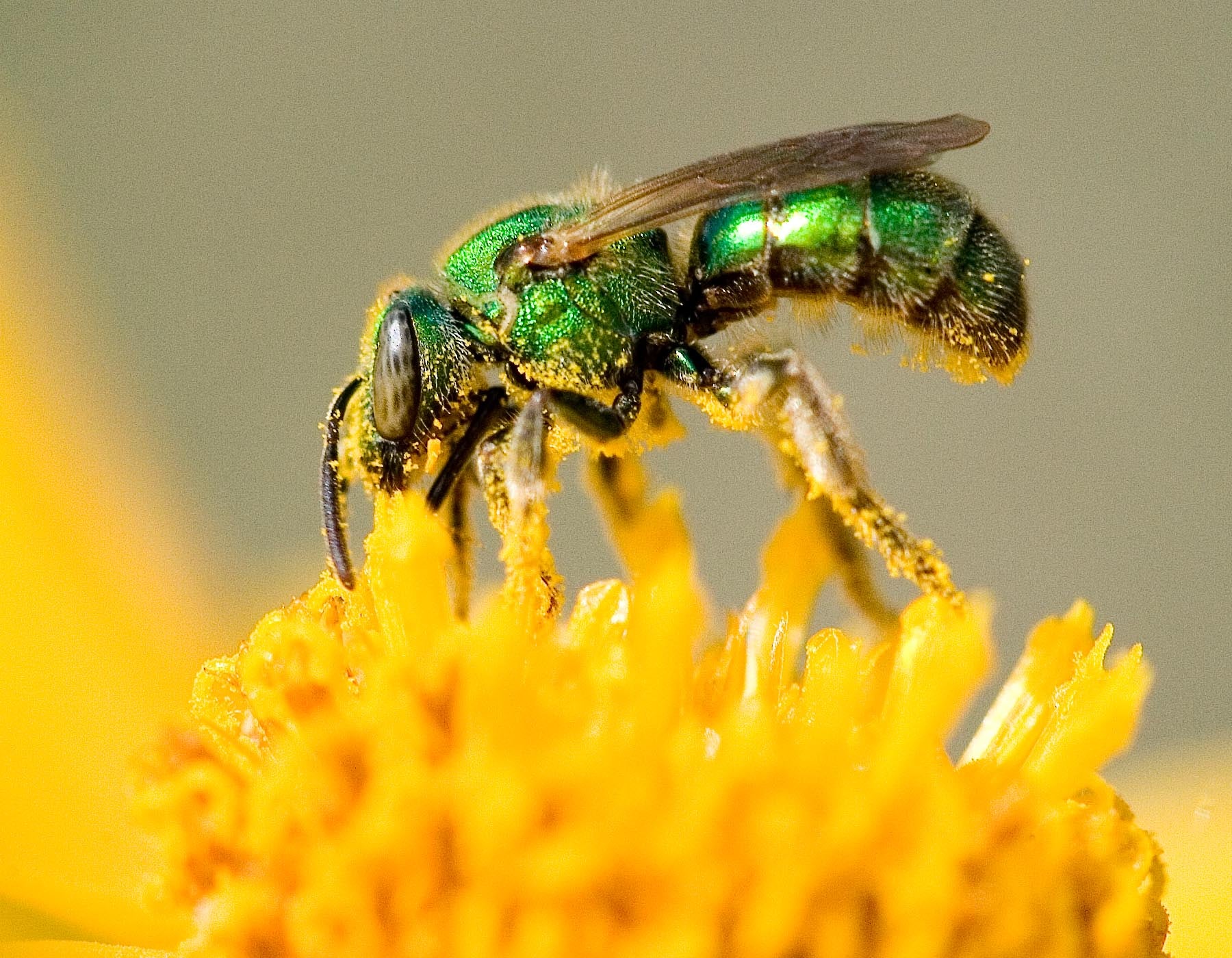 Is user submitted
Caption
The green sweat bee (pictured) is one of around 450 species of native bees in Missouri. Native bees are important pollinators of many popular food crops. MDC urges the public to help bee pollinators by planting native flowers.
Credit
Anonymous
Right to Use
Image 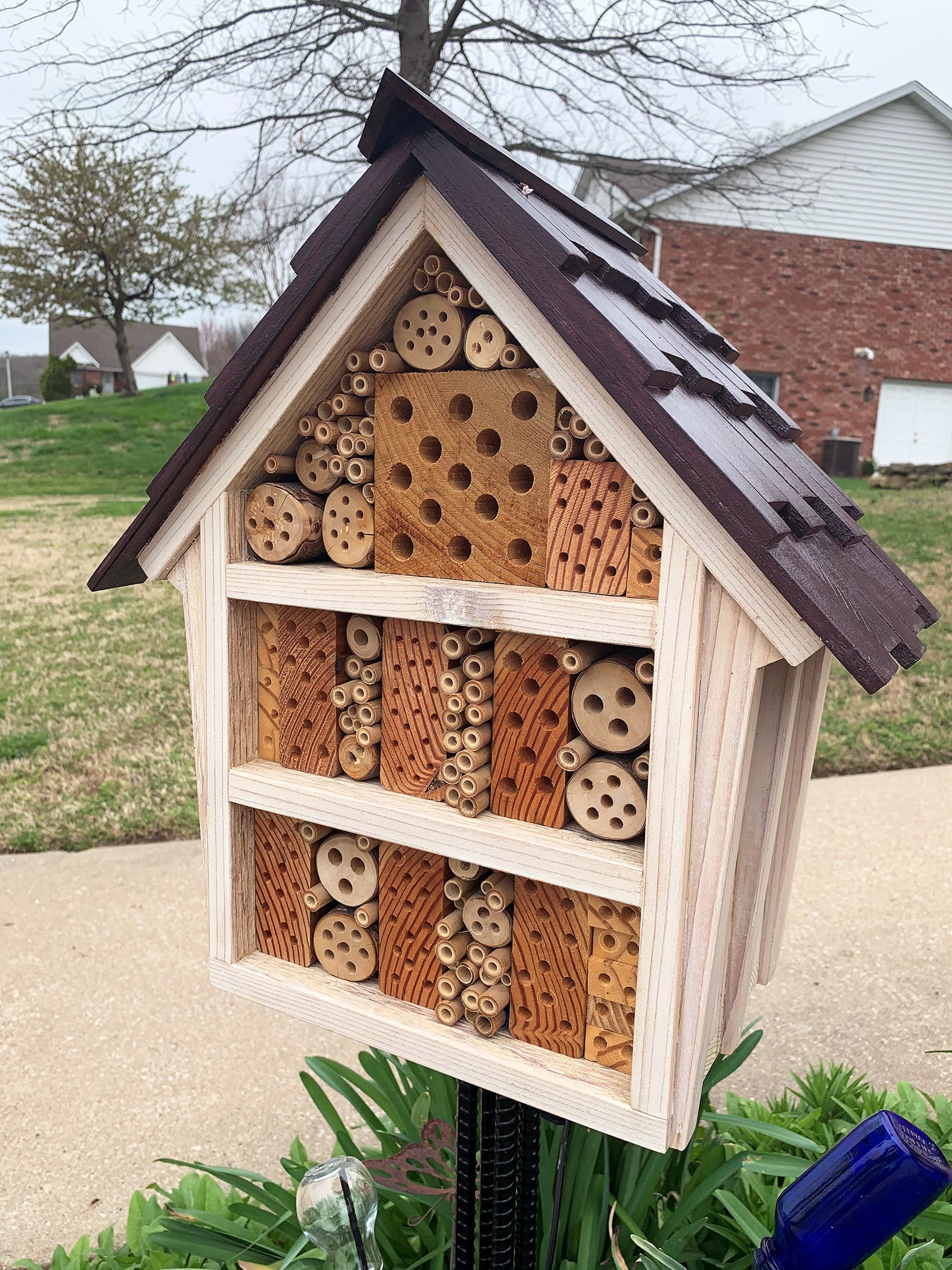 Is user submitted
Caption
A bee house is a great way to support habitat for solitary bees. Missourians can construct their own bee house by using scrap wood with covered nesting and resting holes.
Right to Use
News from the region
Statewide
By
Jill Pritchard
Published Date
04/10/2020
Body

JEFFERSON CITY, Mo. – Spring and summer months bring both the buzz of lawnmowers and bees. These fuzzy flyers are important pollinators, playing a crucial role in the production of many favorite fruits and vegetables. The Missouri Department of Conservation (MDC) encourages the public to “bee-friend” these valuable native pollinators.

“Missouri is home to around 450 species of native bees, but it’s not uncommon for more to be identified each year,” said MDC Urban Wildlife Biologist Erin Shank. “There are several common bees Missourians will encounter, including the bumblebee, carpenter bees, sweat bees, and the leafcutter bee.”

Most native bees only live about one year. They emerge in the spring as adults, visiting flowers and buildings nests. Many species, such as bumblebees, make their nests underground, while others, such as leafcutter and mason bees, will set up shop in small cavities found in wood or in the pith of plant stems.

Bees may send some running for the hills for fear of being stung, but most native bees are harmless.

Additionally, native bees are doing their agricultural duty by pollinating flowering plants that provide food, fiber, and even medicines.

Shank explained that native bees, such as the bumblebee, are effective pollinators because of a technique called buzz pollination.

“It’s a vibrating movement involving their wing muscles that allows the bumblebee to free pollen from the anther, the flower’s pollen-producing structure,” Shank said. “This strategy causes the flower to explosively release pollen. There are some flowering plants that will release pollen only through buzz pollination. One favorite, the tomato plant, requires either buzz pollination or visitation by a larger bodied bee, such as the bumblebee.”

There are several ways the public can support Missouri’s native bees. Shank said the best way is to get floral.

“It’s all about the flowers,” Shank stressed. “Provide native companion plants, and especially those with colorful blossoms, because color attracts bees.”

Companion planting, in which one plant helps the growth of another, can help facilitate the pollination of fruits and vegetables. For example, planting bee balm can help pollinate tomatoes, peppers, and eggplant. Other examples of flowering companion plants include sunflowers, wild hyacinth, blue wild indigo, purple prairie clover, and common milkweed.

There are several options of flowering trees and shrubs, too.

Shank noted that providing more flowers can also mean not mowing the lawn as much.

“Clover, violets, and dandelions are some common lawn plants that provide vital food for bees – especially in the spring before most flowers appear,” Shank explained. “Delaying mowing or mowing higher can help bees by letting the plants grow. Even allowing access to the ground by not mulching every inch can help. Some bees need access to the soil to excavate their nests.”

NO YARD? NO PROBLEM!

Shank said residents who live in urban areas without access to a yard can still be a big help to native bees.

Surprisingly, St. Louis has one of the most diverse bee populations in the Midwest, with more than 200 species found in the city limits alone.

“You can offer bees native flowers in a planting box or pot,” Shank explained. “Getting involved in a community garden or helping plant at a nearby park is great, too.”

For those without a green thumb, White encourages hanging bee houses.

“These houses, which look a lot like bird houses, can provide nesting space for solitary bee species,” White said. “They should be placed next to native blooming plants because most bees nest only a few yards away from their food source. They should also face east to absorb the morning sunlight.”

White stressed the need for yearly maintenance on bee houses.

“After bees emerge in the spring, either the used tubes need to be removed or plugged so they can’t be reused,” White stressed. “The tubes will harbor parasites and disease, as well as pollen mites that could impact another generation of bees wanting to use the house.”

Bee pollinators’ national value is around $30 billion annually, and they are responsible for 1 in 3 bites of food Americans eat. Without bees and other pollinators, humans would not have foods such as grapes, nuts, coffee, and even chocolate.

MDC reminds the public that it is still critical to continue to heed all recommendations for physical distancing, avoiding overcrowding, handwashing, and other public health measures during outdoor activities.