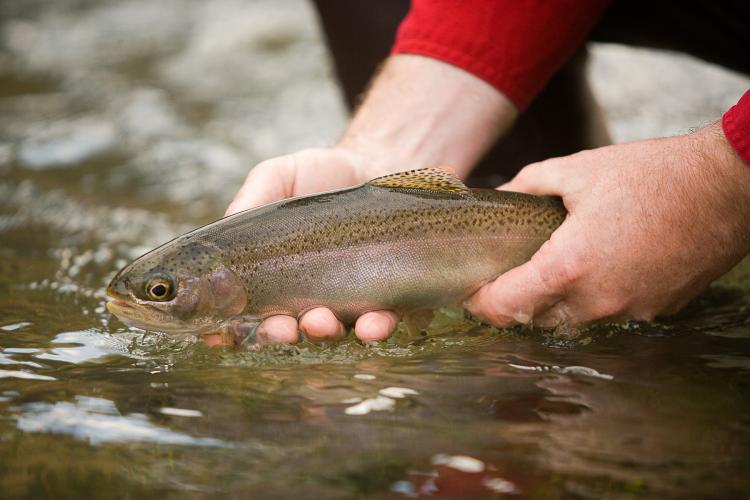 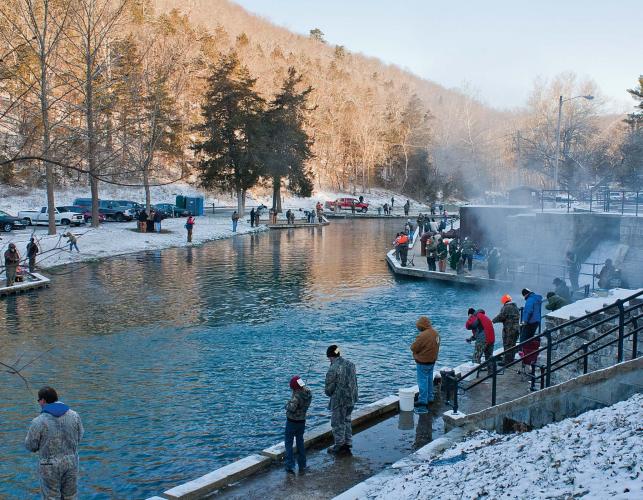 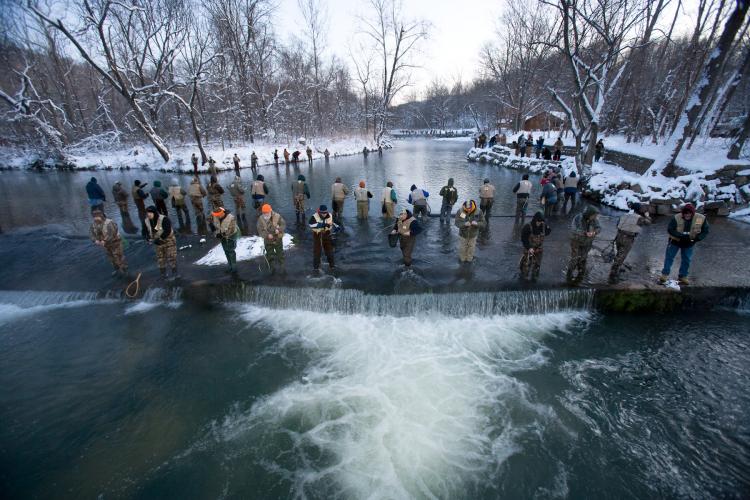 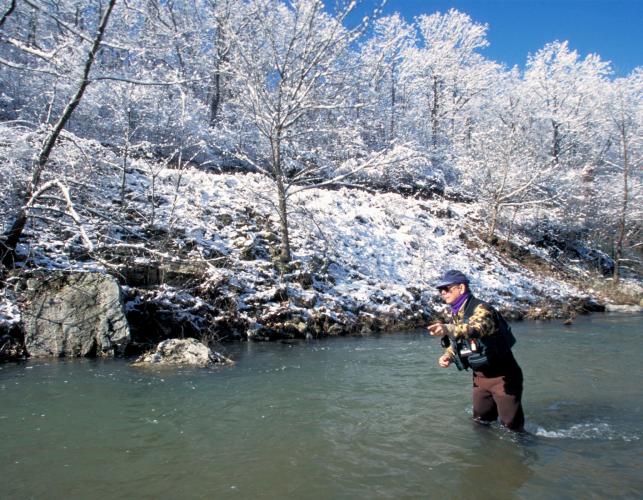 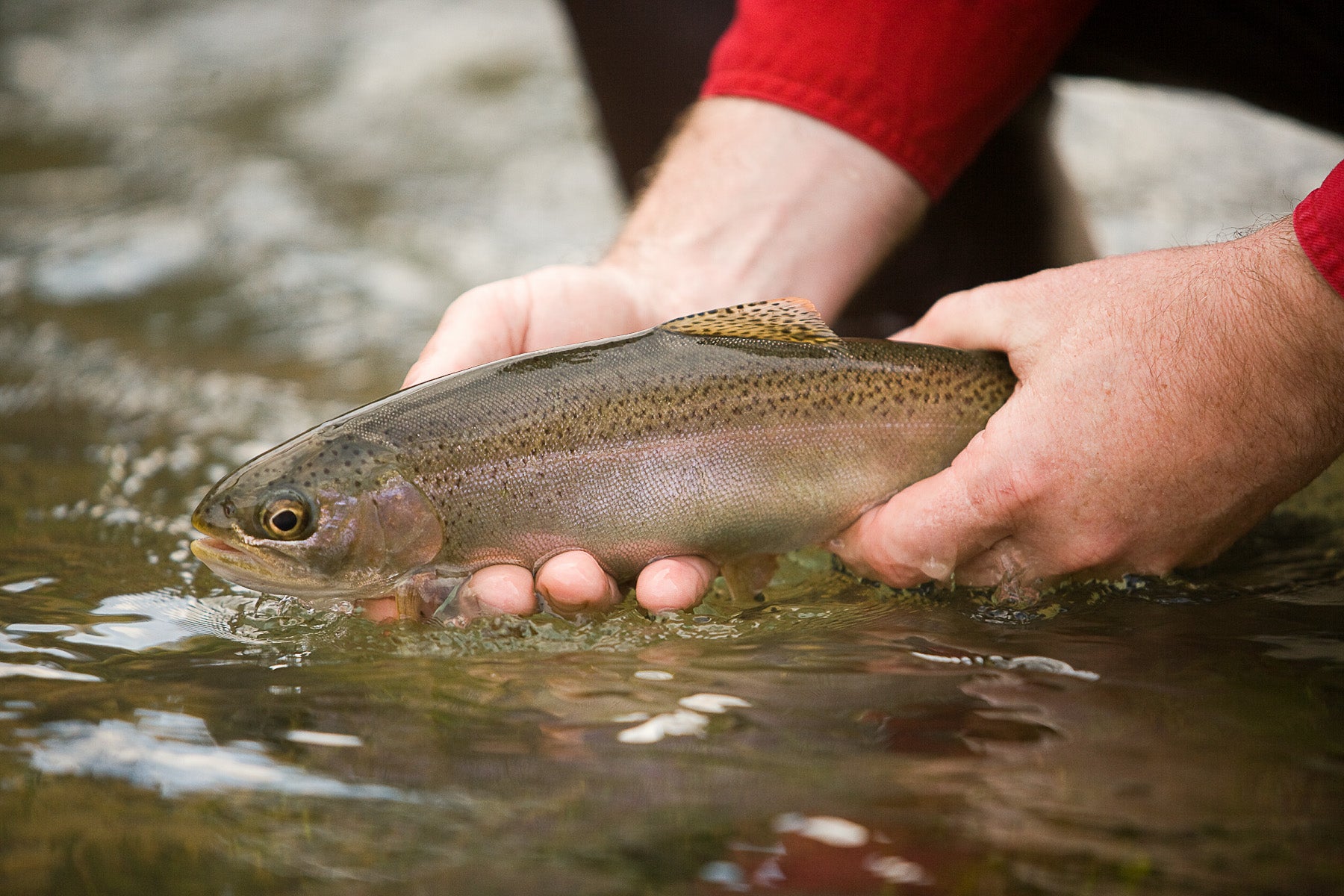 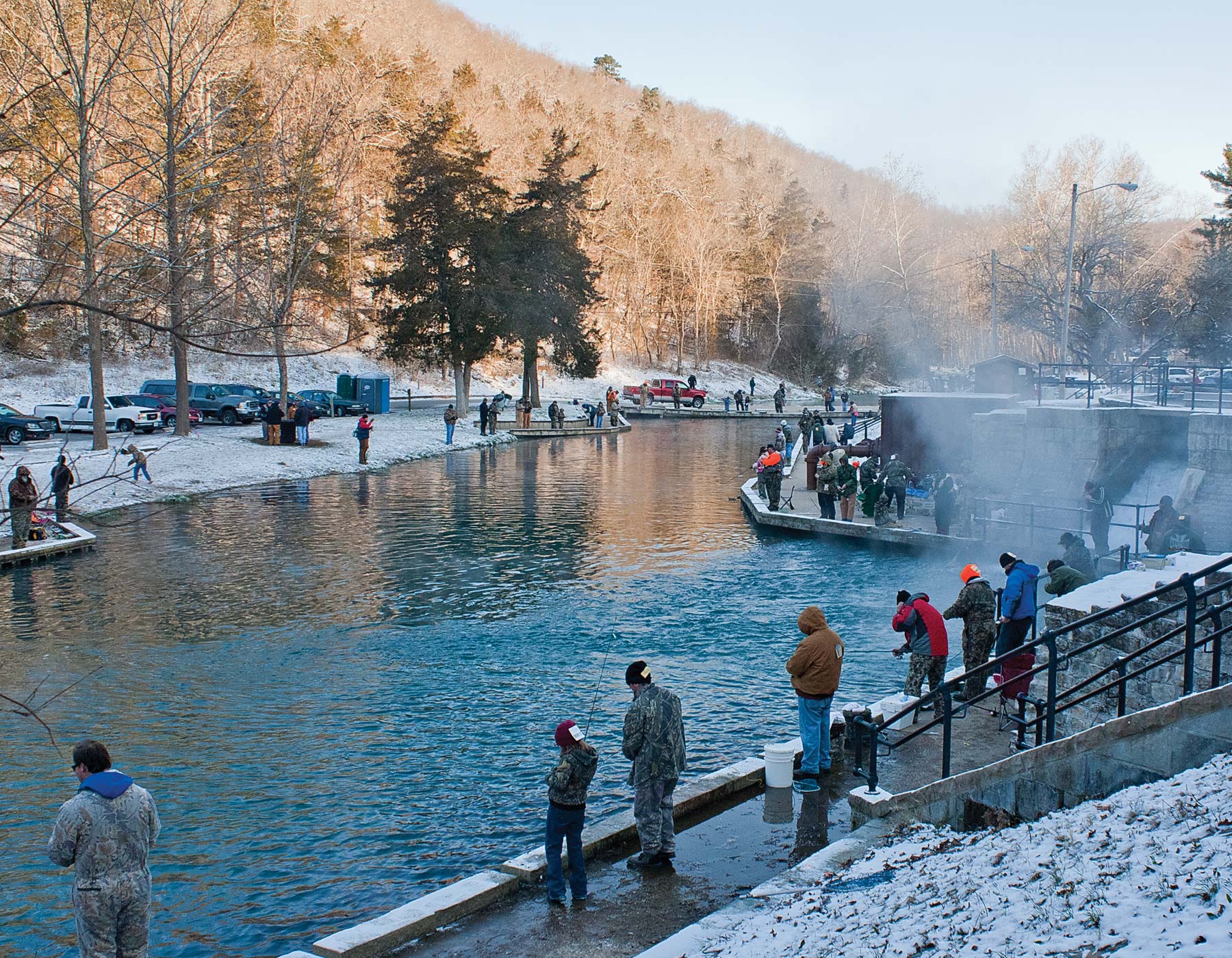 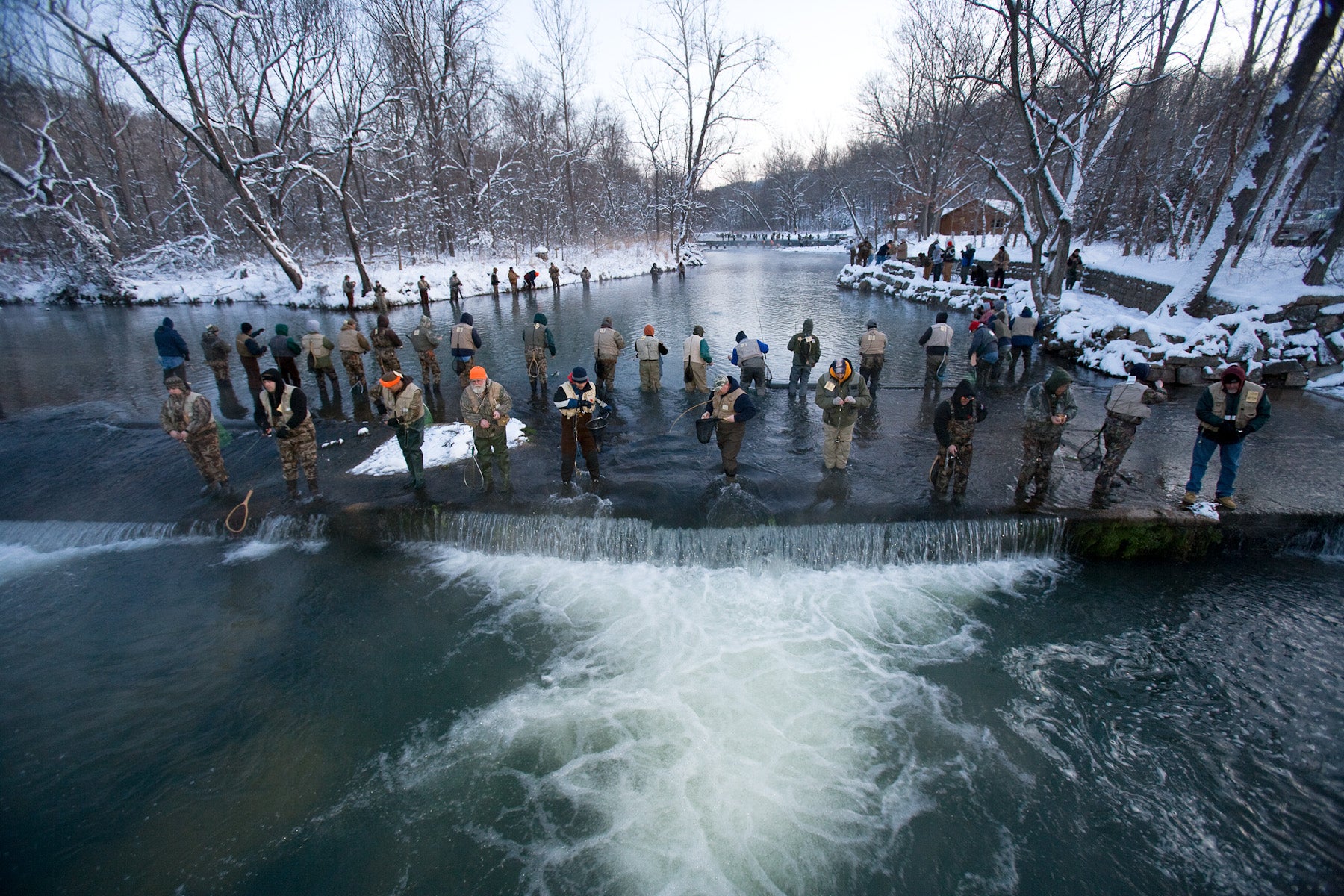 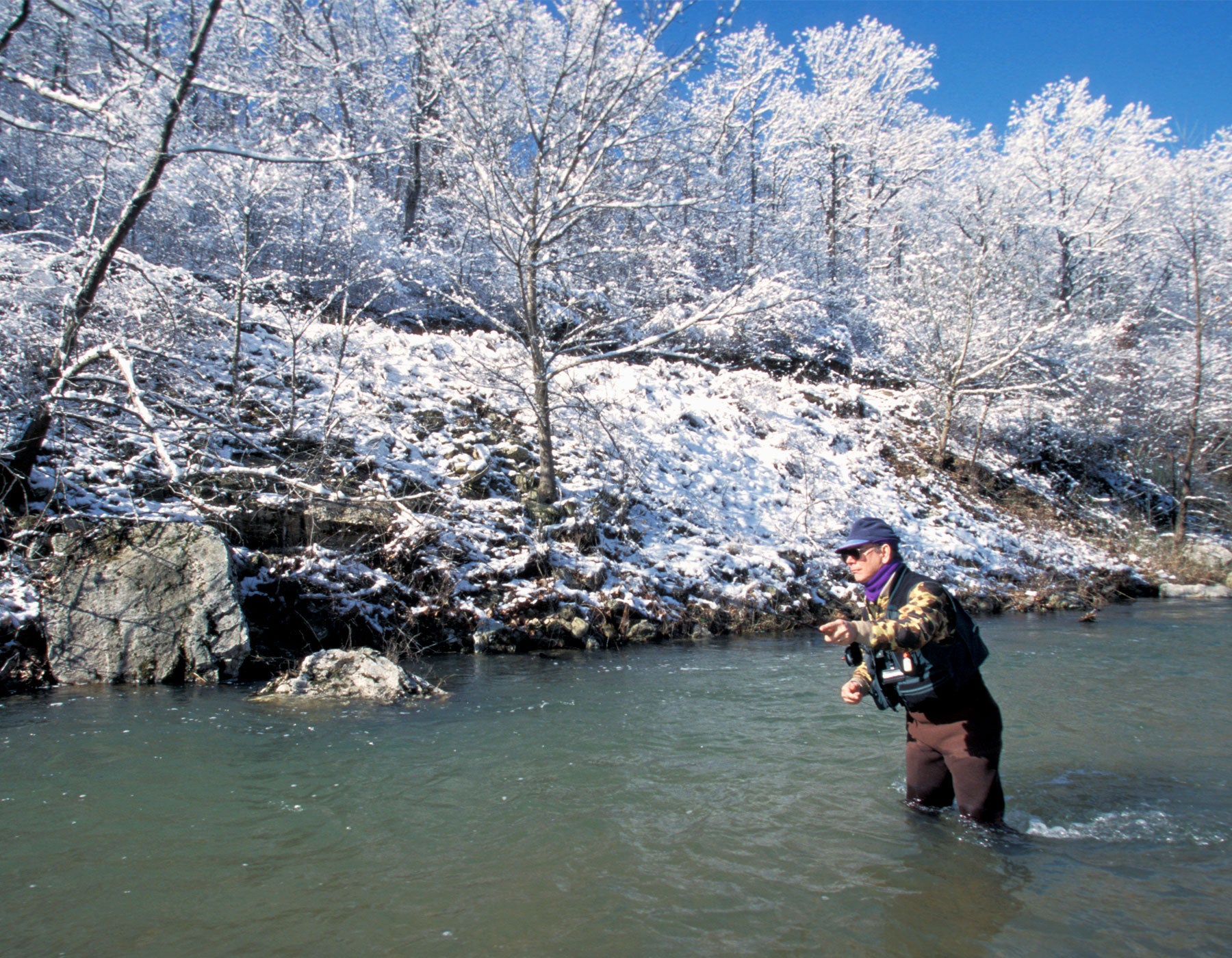 JEFFERSON CITY, Mo. – Sitting in front of a crackling fire tops the list of places to spend a gray winter day for many Missourians. But if you are smitten with the idea of reeling in shimmering, feisty, delicious trout, there is no better place to greet a wintry sunrise than Missouri’s four trout parks.

March 1 marks the opening of catch-and-keep trout fishing at Bennett Spring State Park (SP) near Lebanon, Montauk SP near Licking, Roaring River SP near Cassville, and Maramec Spring Park near St. James. In the gray light of dawn on that day, thousands of people clad in down jackets and chest waders find their spots along the parks’ spring-fed streams, ready to tempt rainbow trout with everything from dry flies to dough bait.

The long-range weather forecast for March 1 points to chilly but not unseasonably cold weather, with high temperatures in the 40s and a small chance of rain. That sort of weather is unlikely to discourage anglers who think nothing of standing up to their bellybuttons in chill water for hours, trying to fill a limit of four hatchery-reared trout. No doubt they are warmed by the knowledge that more than 25,000 trout, averaging around 12 inches, are stocked for opening day, with a few hundred “lunkers,” ranging from three to 10 pounds, thrown in for good measure.

The other factor that determines opening-day attendance is what day of the week March 1 falls on. Weekends draw crowds that can top 10,000. But with opening day falling on a Friday this year, the parks expect a total of approximately 8,600 anglers to turn out.

The Missouri Department of Conservation (MDC) operates hatcheries at all four trout parks. To predict turnout on a particular day, hatchery managers rely on records going back more than 70 years.

Montauk Hatchery Manager Tom Whelan is expecting 2,500 anglers on opening day and plans to stock 7,500 trout, including 50 lunkers. Gov. Jeremiah “Jay” Nixon is expected to fire the pistol to kick off the season there.

Paul Spurgeon, who manages the hatchery at Roaring River, says he expects approximately 2,300 anglers on opening day and will stock 7,000 trout, including 100 lunkers, for the event. Ron Moffet who has volunteered his time for kids’ fishing programs at Roaring River since 1985, will fire the starting gun there. Anglers will find fishing at Roaring River enhanced by improvements to fish habitat and repairs of damage from a flood in 2011.

Bennett Spring Hatchery Manager Mike Mitchell also expects 2,300 anglers on opening day and plans to stock 7,000 trout for them, including approximately 80 lunkers. Don Brown will be starting the trout season at Bennett as he celebrates his 56th opening day. Brown was a Lebanon business man whose store would serve opening-day fishermen. As a member of the Jaycees, he would serve donuts and coffee to the cold anglers waiting for the start of trout season.

At Maramec Spring Park, Hatchery Manager Wesley Swee is planning for 1,500 anglers on March 1 and will stock 4,500 trout, plus 50 lunkers. The honor of firing the starting pistol at Maramec goes to Gary Benson this year. He has been fishing at Maramec Spring for more than 50 years and supports kids’ fishing there both as a volunteer and with donations of fishing supplies for youngsters’ use.

For more about opening day at Missouri's trout parks, check out the photo feature article in the March issue of Missouri Conservationist magazine at mdc.mo.gov/node/20893.

One feature at all four parks is the availability of wader-wash stations with salt-solutions for boots and fishing gear. They are designed to kill the aquatic invasive species, Didymosphenia geminata, commonly known as Didymo. It’s less appetizing nickname, “rock snot,” captures its slimy experience and general undesirability.

To prevent the spread of didymo, the use of shoes, boots or waders with porous soles of felt, matted or woven fibrous material is prohibited at all four trout parks, along with trout streams, Lake Taneycomo and buffer areas.

Anglers can unknowingly spread the microscopic alga on fishing gear, waders, and especially in any porous materials on wader soles. MDC strongly encourage anglers to make use of the wader-wash stations to completely clean waders as far up as contact with water has been made, along with any fishing equipment that has been used in other states.

Anglers can also help prevent the spread of rock snot by cleaning fishing gear and waders and drying them in the sun for 48 hours when moving between waters. They also can help by replacing felt-soled waders with rubber-soled ones. More information on and photos of Didymo are available at mdc.mo.gov/node/15265.

Trout hatcheries are just one way that conservation pays in Missouri. A survey conducted in 2001 showed that trout anglers spent more per day on their sport than anglers pursuing any other species. Trout anglers’ expenditures that year totaled $115,561,474.