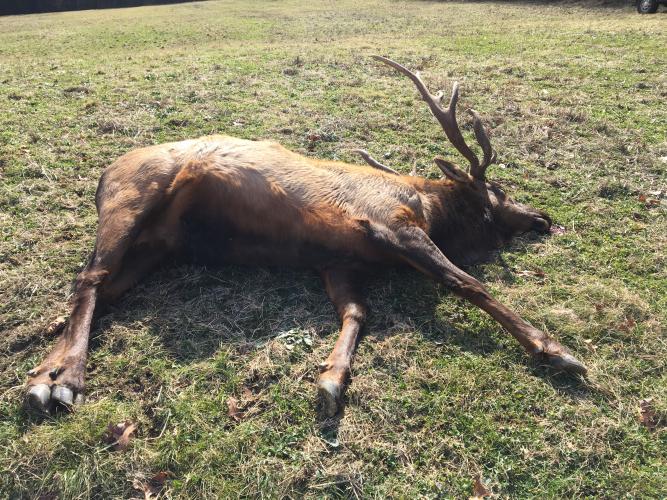 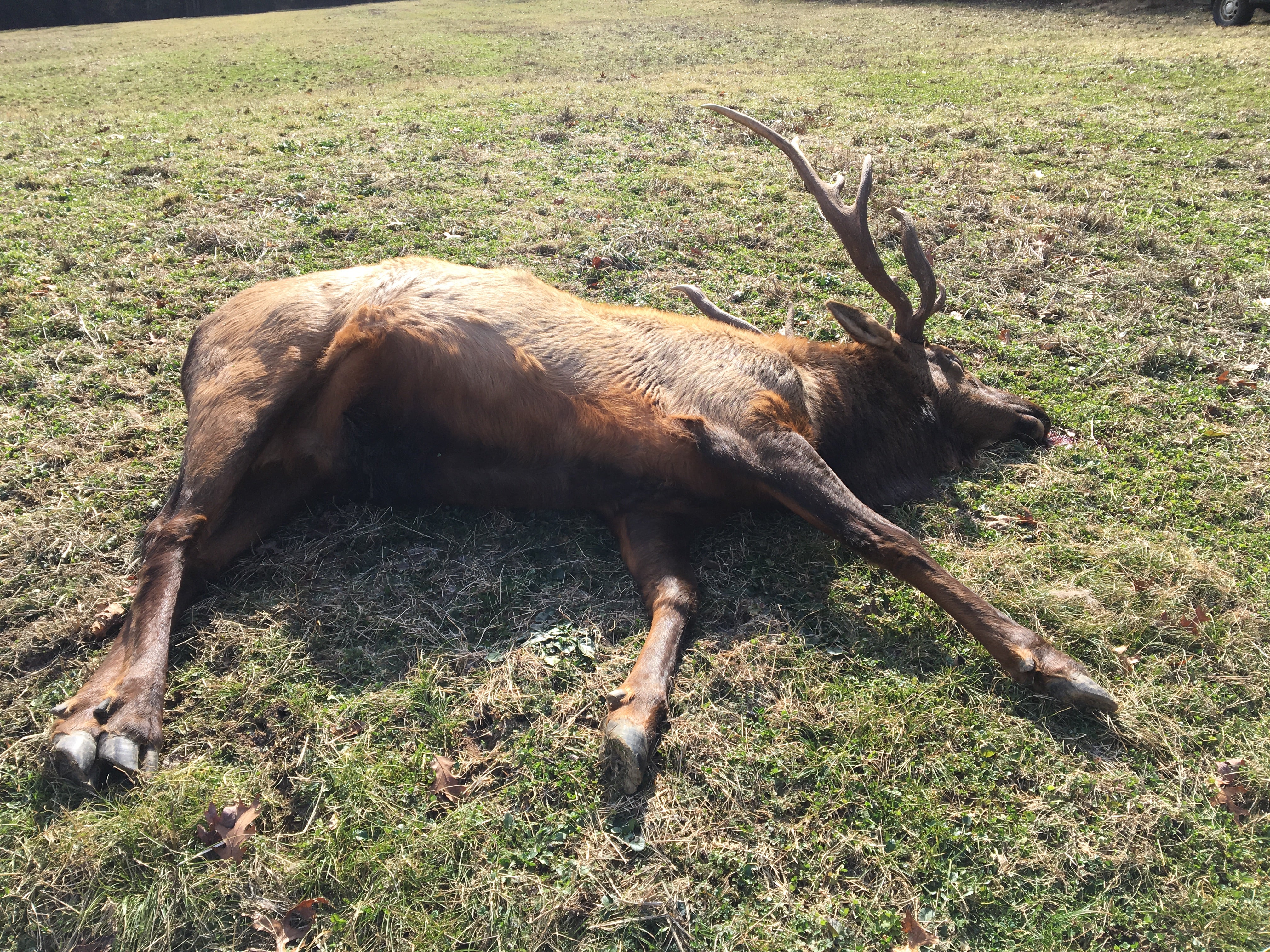 Is user submitted
Caption
This is the carcass of a 10-year-old bull elk that was shot and left near the Log Yard area of Shannon County. An adult cow elk was also shot and left in the area. MDC asks that anyone with information on this poaching case call (573) 226-3616, ext. 226, or Operation Game Thief at 1-800-392-1111.
Credit
MDC
Right to Use
News from the region
Statewide
Ozark
By
Candice Davis
Published Date
02/14/2019
Body

SHANNON COUNTY, Mo. – The Missouri Department of Conservation (MDC) seeks information in the case of two adult elk shot Friday, Feb. 8, near the Log Yard area of Shannon County. One of the elk was a 10-year-old bull, brought to Missouri from Kentucky in 2011. The other was an adult cow, born in Missouri. Conservation agents note no parts of either animal were removed.  As is the case with most poaching incidents today, these actions had nothing to do with providing meat for a family.

“It appears these poachers simply wanted to shoot elk for fun or out of spite, and that’s abhorrent,” said MDC’s Protection Division Chief Randy Doman.

Doman said this marks the fifth known elk poaching incident since the elk population was restored in 2011. Elk poachings in the state also include an adult bull in December of 2015, a two-month-old calf in August of 2018, and a bull calf this past January.

In the 2015 case, the poachers removed the bull’s antlers with a chainsaw and left it otherwise untouched in the woods where it fell. Doman said it’s important to note that poaching is not hunting, and poachers are not hunters.

“These poaching incidents are ethically wrong and represent unacceptable moral conduct,” he said. “We know Missourians care about conservation, wildlife and the laws that protect their wildlife resources. These actions don’t represent the values of Missourians and hunters here.”

When elk restoration began in Missouri in 2011, one of the projected benefits was an increase in tourism to the Missouri Ozarks. Visitor surveys conducted at the two self-guided driving elk tours at Peck Ranch and Current River conservation areas determined elk brought nearly $1.3 million in increased economic activity to the region in 2016. This data included regional economic impacts such as food, lodging and transport expenses of more than 11,000 visitors that toured these areas in 2016. Doman noted that poachers are not considering the economic detriment they cause for the area.

“The restoration of elk is appreciated by many people, businesses and organizations in the area,” Doman said. “The citizens here take great pride in their hunting traditions and their wildlife resources.  A healthy, growing elk population brings significant economic and cultural benefits to these communities, and the senseless waste of the people’s resources should not be tolerated.”

Anyone with information that could help with this investigation is encouraged to call (573) 226-3616, ext. 226 and leave a detailed message with your contact information, or you may call the Operation Game Thief (OGT) hotline at 1-800-392-1111. The hotline is managed 24 hours a day and callers may remain anonymous. Rewards are available.

For more information about elk in Missouri, visit MDC’s website at https://bit.ly/2EvwvDK.