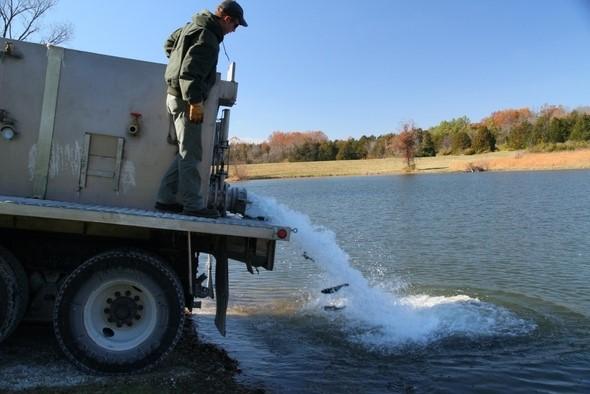 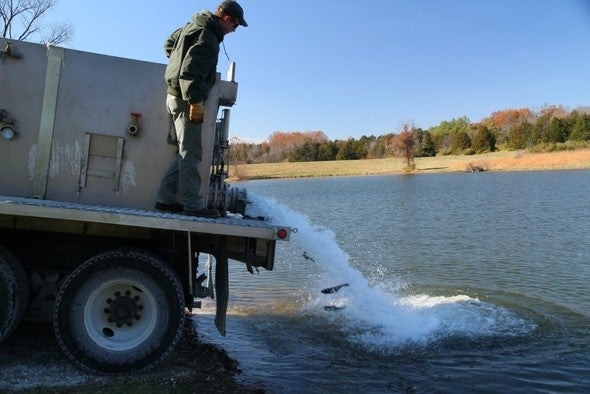 During winter months, the metro St. Louis area is a great place to fish for rainbow trout, thanks to the MDC’s winter trout program.

“The whole goal of the program is to bring fish to the people, so they don’t have to drive to an Ozark trout stream or trout park,” said Meneau.

From November through February, MDC stocks rainbow trout in 12 St. Louis City and County lakes, as well as in five lakes at the MDC August A. Busch Conservation Area on Route D in St. Charles.

The rainbows bound for the St. Louis area are spawned and raised at MDC’s Montauk Hatchery, southeast of Licking. “We’ll stock close to 40,000 fish this year,” Meneau said.

And this season anglers had better bring some larger nets. While the average size of the fish is about 11 inches, Meneau said that this year MDC will also be stocking some extra-large whoppers as well. “Some fish will weigh up to 10 pounds,” said Meneau. “There’ll be some real tackle testers.”

Between Nov. 1 and Jan. 31, some lakes are catch-and-release only, and some are catch-and-keep. After Feb. 1, trout may be harvested from all lakes. Anglers should consult the St. Louis Area Winter Trout Program brochure for details, possession limits and bait restrictions, which is available at MDC offices or at https://goo.gl/T9Qpp6 , or check regulations posted at the lakes. All trout anglers between age 16 and 64 must have a valid Missouri fishing permit to participate. Anglers wishing to catch and keep trout must also possess a trout permit.

“The fish stocking hotline has become very popular,” Meneau said, “and we update it right after we finish stocking for the day. It’s toll free from anywhere in the St. Louis area. There’s a recorded message that tells when we stocked, where we stocked, and what fish we stocked.”

“These close-to-home opportunities make it easy for a quick trout fishing excursion after work, or during an activity-packed weekend. It also makes trout fishing much friendlier on the fuel budget,” said Meneau. Plus, this season, those lurking lunkers provide even more incentive.

For information about fishing, go online at https://huntfish.mdc.mo.gov/fishing