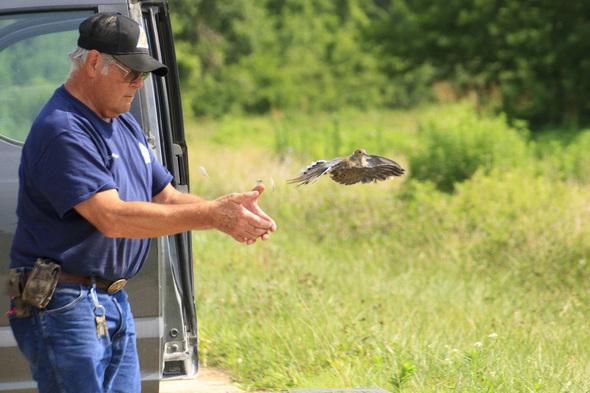 Caption
MDC Resource Aid Clyde Schulte releases a mourning dove after banding is complete at Bellefontaine Conservation Area in North St. Louis County. MDC biologists are trapping, collecting data, and placing ID bands on the birds during the July to help them in managing their populations.
1/4
Image 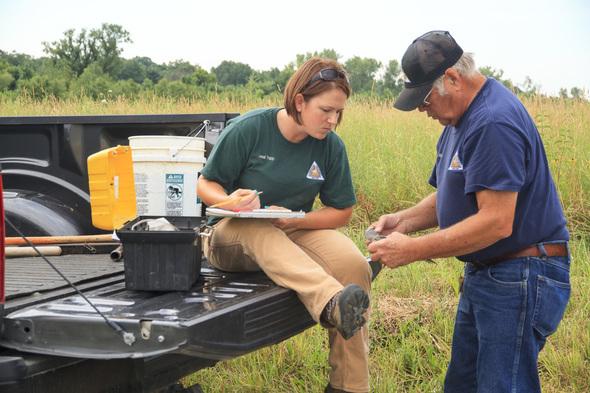 Caption
MDC Wildlife Biologist Jessi Tapp (left) records data from a captured mourning dove, including its gender and an estimate of the bird’s age.
2/4
Image 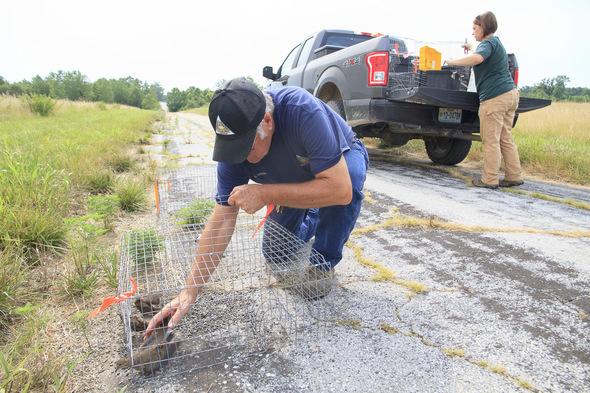 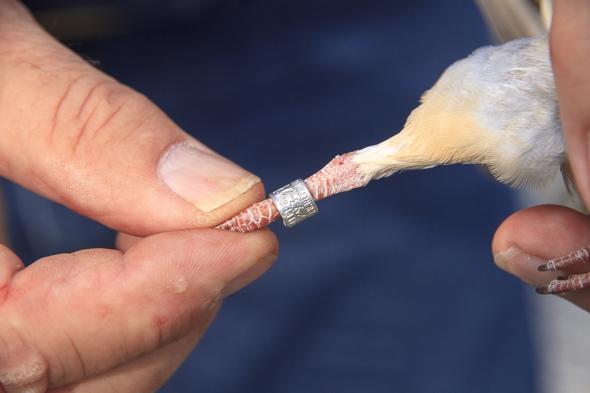 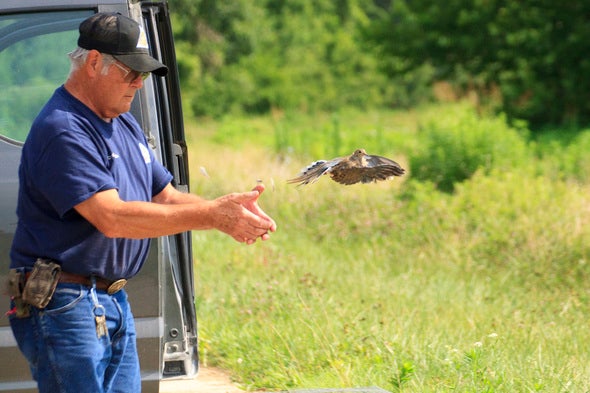 Is user submitted
Caption
MDC Resource Aid Clyde Schulte releases a mourning dove after banding is complete at Bellefontaine Conservation Area in North St. Louis County. MDC biologists are trapping, collecting data, and placing ID bands on the birds during the July to help them in managing their populations.
Image 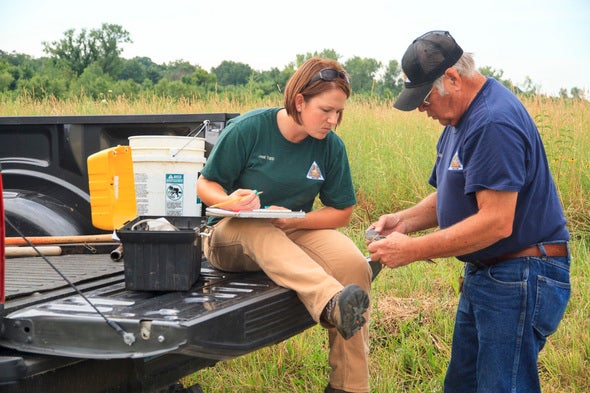 Is user submitted
Caption
MDC Wildlife Biologist Jessi Tapp (left) records data from a captured mourning dove, including its gender and an estimate of the bird’s age.
Image 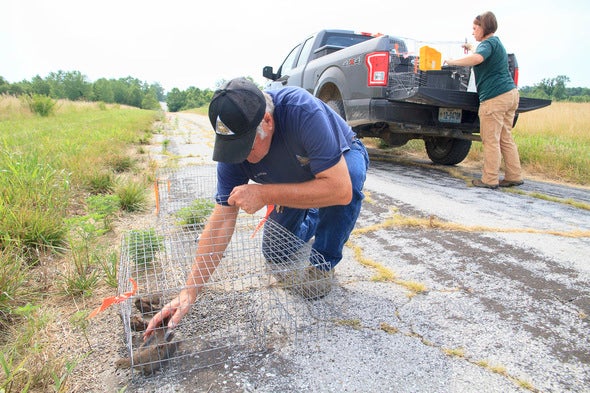 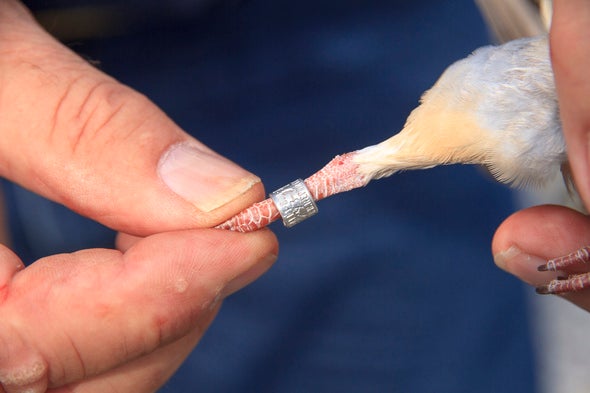 ST. LOUIS, Mo.—Missouri Department of Conservation (MDC) wildlife biologists are adorning mourning doves (Zenaida macroura) with new jewelry this month in north St. Louis County.  In exchange for the glittering gifts, the birds are providing MDC with valuable information that biologists can use to help monitor their populations.

Mourning doves are easy to identify from their rounded heads, thin, pointed beaks, smooth breasts and grey-brown plumage marked by black spots along their wings. Their gentile, plaintive cooing is a common sound in the places statewide they call home—from open fields to suburban backyards.

The birds are also popular among hunters during dove hunting season, which runs from Sept. 1 to Nov. 29 in Missouri.

But on this morning in early July their only pursuers were the MDC biologists conducting annual trapping and banding.  According to MDC Wildlife Biologist Jessi Tapp, the month of July is good timing because the birds begin congregating this time of year, making it easier to trap more doves at once, which means more data.

MDC staff conducts the sampling on Columbia Bottom and Bellefontaine Conservation Areas, both in north St. Louis County.  They split the work in two shifts, one in the morning beginning shortly after sunrise, and a second one in late afternoon.  The middle of the day is avoided so they won’t risk stressing the birds in the mid-day heat.

In order to draw the birds in, multiple sites are scattered with sunflower seed in advance of trapping.

The traps consist of “boxes” fashioned from chicken coop wire with tunnel-like entrances that guide the birds in to eat the seed. However, once in the box, the restricting shape of the tunnels prevents the doves from fitting back through and using them as exits.  They are trapped until the biologists arrive.

Once there are doves to work up, biologists act quickly to minimize stress.  They first determine if it is either a hatch-year bird—that is one born within the last year—or an adult which is a year or more in age.  They do this by examining the wing feathers. Next they identify the gender of each bird.

“We also check the molt of the bird,” said Tapp.  “The molt pattern can give an idea of when the bird was hatched for hatch-year birds.  For example, if fewer primary feathers have molted then the bird is likely a later-season hatchling.”

After recording the data, every bird is fitted with a small metal band around its leg—that shiny new jewelry—which has a unique number matched with its data.  If the band is picked up again when a bird is re-trapped or turned in by a hunter after being harvested, biologists gain valuable insights.

Tapp said the information collected will be used to inform biologists as to the condition of the of dove populations.  By monitoring in this manner, MDC biologists can estimate population numbers and nesting success.  They use this to make scientifically-informed decisions regarding regulations, such as bag limits, during the hunting season.  When birds are found which have been banded at distant locations, it can also help provide clues as to their migration patterns.

For wildlife biologists like Tapp, the experience is about much more than collecting data.  It validates why they do what they do.

“This is one of the things that gets us out handling wildlife and really seeing first-hand how the wildlife is using the areas.  It definitely one of those things we all cherish,” she said.

Learn more about mourning doves with the online MDC Field Guide at https://goo.gl/yB9ReM.