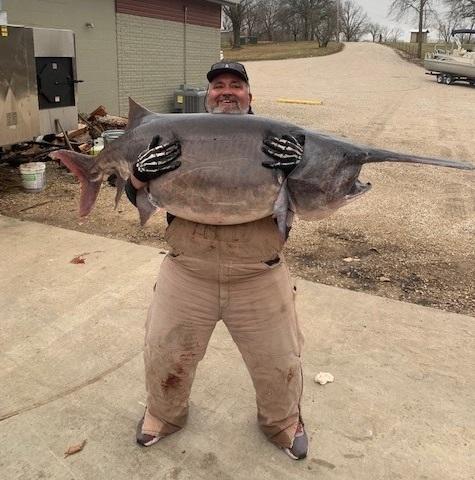 Caption
MDC congratulates Jim Dain of Pittsfield, Ill. on becoming the second state record holder of 2022 after snagging this 140-pound, 10-ounce paddlefish at the Lake of the Ozarks March 18.
Credit
Missouri Department of Conservation photo
Right to Use
1/1
Image 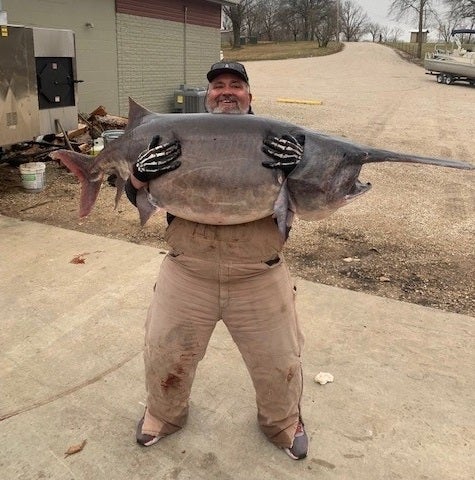 Is user submitted
Caption
MDC congratulates Jim Dain of Pittsfield, Ill. on becoming the second state record holder of 2022 after snagging this 140-pound, 10-ounce paddlefish at the Lake of the Ozarks March 18.
Credit
Missouri Department of Conservation photo
Right to Use
News from the region
Statewide
By
Jill Pritchard
Published Date
03/23/2022
Body

JEFFERSON CITY, Mo. – The Missouri Department of Conservation (MDC) congratulates Jim Dain of Pittsfield, Ill. for snagging a monster 140-pound, 10-ounce paddlefish March 18 at the Lake of the Ozarks. The latest record breaks the previous record of 140-pounds, 9-ounces set in 2015 on Table Rock Lake.

Dain said he was on a fishing trip with his family and almost didn’t get the boat out that day because the weather kept changing.

“The forecast was calling for storms, and then it changed to no rain, so we went out, but it just kept getting colder,” Dain recalled. “We weren’t having much luck, but decided to fish for another hour so we took another turn. And that’s when the drag on the reel started. It felt like a tree was on the line!”

Dain said it took at least 20-minutes before they ultimately got the fish in the boat. After getting back to the boat ramp, Steven Henson of Bonne Terre, who happens to hold the Missouri state record for river carpsucker, was in the area and mentioned Dain should get in touch with MDC.

“He was at the boat ramp and happened to hold a state record,” said Dain. “He’s looking at the fish and says to me, ‘Boy, I think you should get that checked out because it could be a state record.’”

Dain contacted MDC Camden County Agent Tyler Brown, who advised him to go to Tom’s Slaughterhouse in Montreal to use a certified scale that could handle weight more than 100-pounds. His paddlefish is the second state record fish caught in 2022.

“We got 16 one-gallon bags of meat out of this catch,” laughed Dain. “We’ve fried it, grilled it and made paddlefish tacos the other night. We’ll be having paddlefish for a while!”