The gray partridge is a small chicken-like bird with a short neck, short tail, and short, rounded wings. It has a grayish-brown back and chest, rust-colored face and throat, and males have a dark, reddish, U-shaped belly patch (females may have a similar patch, but when they do, it's usually smaller). Flanks have chestnut barring. The outer tail feathers are chestnut, and the bill and legs are gray. Call is a KEE-rrrrrrrr or KEE-uhhhhhk, ending in a sound like a drawn-out scratch or rusty hinge.

Similar species: The rusty face and throat contrasting against the neck and back, and the body shape help identify this bird from other pheasant- and quail-family birds in Missouri. It is smaller than grouse, and larger than quail. It is imperative that hunters know how to identify greater prairie-chickens, which are a declining, endangered species. They are larger, with heavy brown-and-white barring above and below. 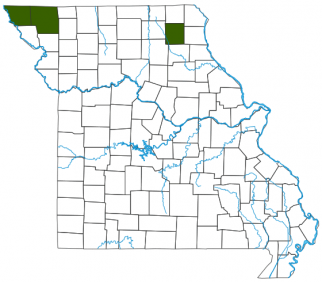 Pastures with fencerows, hayfields, and grainfields. In the autumn, gray partridges gather into coveys of about a dozen birds. This gamebird was introduced from Eurasia in the early 1900s. Most of its North American range is to the northwest of our state (especially in the Dakotas, Montana, and the Prairie Provinces of Canada), though some gray partridges do appear in northern Missouri. Hunters are advised to know the difference between game species and the endangered greater prairie-chicken.

Forages on the ground, usually in agricultural fields. This species is primarily a seed eater, but the young require insects in the diet to provide the protein necessary for their growth.

In Missouri, the gray partridge is listed as "hypothetical": there may be at least one possibly valid record of having been seen in our state, but it has not met the criteria for full acceptance by the Missouri Bird Records Committee. In North America, populations have been declining; in some places, people are still introducing it for hunting purposes. In its native range in much of Europe and western Asia, its numbers are steady, though it has declined so steeply in the United Kingdom that people are working to protect its presence there.

This species nests in a depression on the ground lined with leaves, straw, and grass. A clutch comprises 10–22 eggs that are olive (occasionally white) and unmarked. They are incubated for 23–25 days. Like other gallinaceous birds, such as chickens, and ground-nesters, such as killdeer, gray partridge young are precocial: upon hatching, they are covered with down and almost immediately are able to run around outside the nest. Gray partridges become independent some 13–15 days after hatching.

A favorite of gamebird hunters, who enjoy the wing-shooting challenge as well as the meat, this species is native to Europe and western Asia. Other gamebirds introduced to North America include the ring-necked pheasant, chukar, and Himalayan snowcock. Meanwhile, North America's native wild turkey has been introduced in some parts of Europe, Hawaii, and New Zealand.

As a general rule, the hatchlings of ground-nesting birds typically are precocial. Like newly hatched chickens, they have an initial coat of down feathers and are able to see, peck, and run around soon after leaving the egg. This is an adaptation for the much greater risk of predation associated with ground nests. Birds that nest in the relative safety of tree branches or cavities are more likely to have altricial (naked, helpless, blind, less-developed) young. The eggs of precocial species are more costly for the mother's body to produce, but the young are fairly able to take care of themselves soon after hatching. The eggs of altricial species require a lower investment from the mother's body initially, but the parents must spend relatively more time and energy tending their young once they are hatched: feeding them and keeping them warm. 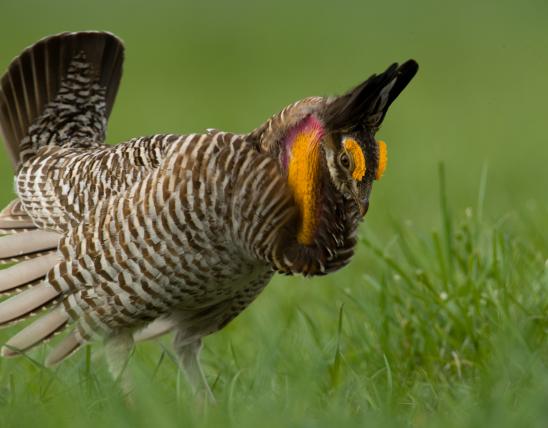 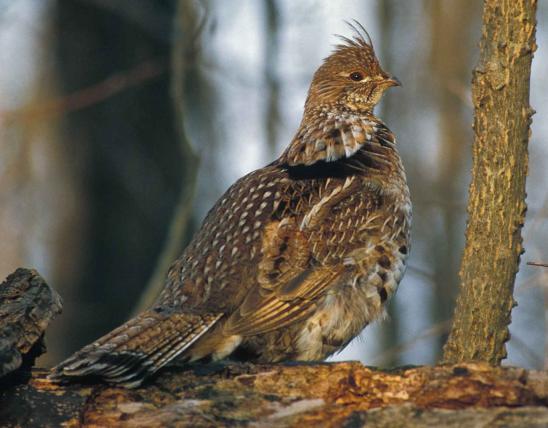 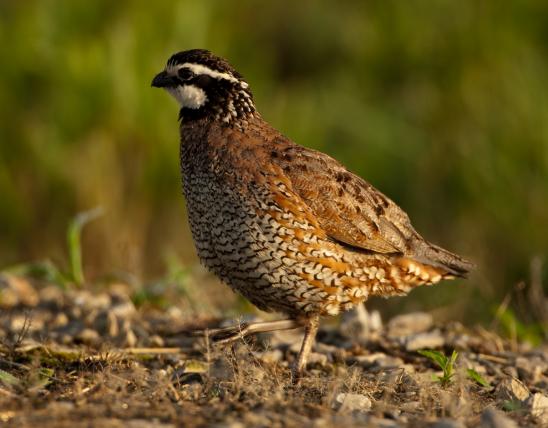 Northern Bobwhite (Bobwhite Quail)
About Birds in Missouri
About 350 species of birds are likely to be seen in Missouri, though nearly 400 have been recorded within our borders. Most people know a bird when they see one — it has feathers, wings, and a bill. Birds are warm-blooded, and most species can fly. Many migrate hundreds or thousands of miles. Birds lay hard-shelled eggs (often in a nest), and the parents care for the young. Many communicate with songs and calls.
Related Content
Bats