The Missouri Department of Conservation recently completed a multiyear assessment of blue catfish and flathead catfish in the Mississippi and Missouri rivers. Results indicate that while these fisheries are healthy and sustainable, regulation changes could improve the chances of harvesting more and/or catching larger blue catfish and flathead catfish. MDC will be reaching out to fishers to learn their preferences for managing these fisheries. A brief summary of the study results and links to the full reports can be found below.

Blue catfish and flathead catfish were assessed during 2015–2018.

Electrofishing was used to capture catfish; all catfish were measured, and some were weighed and aged.

Reward tags were affixed to some catfish to determine exploitation rates, which is the proportion of fish in a population that are being harvested. Multiple reward values were used to estimate tag reporting rates.

Population demographics and exploitation estimates were used to determine fishery responses to a variety of potential regulation changes. On the Missouri River, sport fishing regulations allow harvest of five blue catfish and five flathead catfish daily, with no size restrictions. On the Mississippi River, sport fish regulations allow harvest of 20 blue and channel catfish in the aggregate and 10 flathead catfish daily, with no size restrictions. Commercial fishing regulations allow harvest of an unlimited number of blue catfish and flathead catfish at least 15” long from the Mississippi River and from the lower St. Francis River (that portion which forms the border between Missouri and Arkansas). Commercial catfish harvest is prohibited on the Missouri River.

The graphs below compare how yield (total weight of fish harvested) and the number of catfish greater than 20 pounds (38” for blue catfish, 36” for flathead catfish) in the population were predicted to change with an 18” MLL (minimum length limit), 21” MLL, 24” MLL, 1 over 30” (daily bag limit), or 1 over 35” (daily bag limit) regulation change. A protected slot limit (26-34”), like the blue catfish regulation at Lake of the Ozarks and Harry S. Truman Reservoir, increased the number of large catfish in the population more than with a minimum length limit, but greatly decreased yield, and was therefore considered inappropriate for Mississippi and Missouri river catfish fisheries. 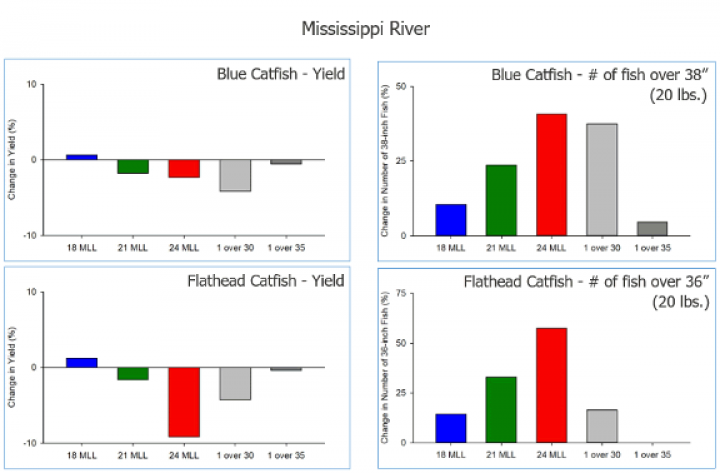 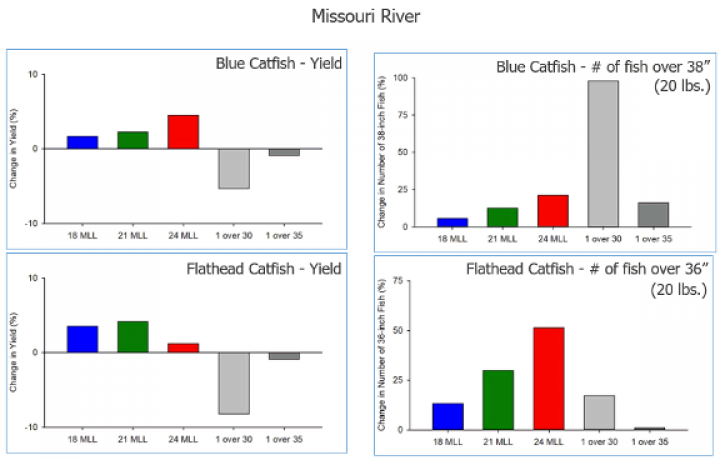